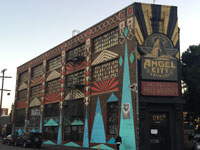 Really cool spot. Nice, open warehouse space. Beer is good, but not great. They have a lot going on to make sure you get the most out of your visit. I just wish the beer was a little better.

Love this place! Great beer at reasonable prices. Cool warehouse vibe w/ food trucks and a barcode across the street.

Visually, one of the best breweries I’ve visited. Great artistic vibes, awesome local support, and a gorgeous repurposed brick building. The bartenders were friendly and knowledgeable. The beer itself lacked a little for me. A couple good tasters in my flight, but also a few less-than-stellar beers. And while the selection when I was there wasn’t very good, they did have a lot of choices of varying styles. Next time I’d love to see some options from the barrel room, or some more big heavy stouts to choose from for the holiday weather. Cheers!

Like most, this brewery has a far better selection than what their guest taps at local bars and inventory at Costco might lead you to believe. Outside of the brewery, I mostly knew Angel City for a couple IPAs and a salted caramel gose. When I visited, they had a full gamut of styles ranging from hoppy to sour, dark to fruity. They have a spacious tasting room, cool gift shop and decent bottle selection. if in LA, worth a stop.

Great space, OK beer. Super busy on a midday Saturday. Fun mix of original fixtures and set design. Frequent food trucks, kid friendly, some games and a shop. More fun as a stop than a beer destination - also in the thick of the arts district with many galleries and other breweries near by.

The beer here is pretty mediocre, but the atmosphere here is by far the best out of any brewery I've ever been to.

First of all, they have cornhole. Who the hell that's not from the Midwest/Flyover states/South plays cornhole or actually knows the rules well enough to play it? Apparently the people at Angel City Brewery do.

Who the hell plays foosball at a brewery? Apparently the people at Angel City Brewery do.

Who the hell shows up to a brewery with high heels in a really skin tight black dress that would make even Coco Chanel proud? Apparently the people at Angel City Brewery do.

What kind of a brewery has a dedicated space for artwork that has nothing to do with beer? Apparently Angel City Brewery does.

and last but not least,

Who takes a selection of 7-8 really mediocre beers and claims that they have a "wide" selection of "good" beer? Apparently the people that drink at Angel City Brewery do.

Okay, I admit the last one wasn't quite called for, but the fun atmosphere at Angel City far outweigh my disappointment at their lack of decent beers. Given the wide array of food choices around the area, Angel City would probably make a good finishing point /last call to a Dowtown LA/Arts District bar crawl.

Great vibe and space. Friendly folks. They make good beer and have good variety. Definitely will go back. Update 8/23/15-more of their beer is making it out to the local bar scene, and is being fairly well received. This is a place to take your large crew as they have the seating.