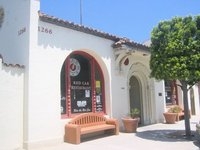 It all started with a BeerMail from fellow BA, Mickeymac, inviting me to share one of two Season Tickets that he has to the Home Depot Center to watch a Football, I mean Soccer, Match. We originally decided to meet at the Alpine Village, but StoutLove77 told me of this little known (it seems) Brewery only a few miles further up the road. Having been to the Alpine Village, I have to say that this was a far better choice for a pre-match Pint and a bite to eat.

Easily accessible from the 405 and 110 Freeways, the Red Car Brewery and Restaurant is located just off Torrance Boulevard on Sartori Avenue (which is a tight left turn if you are coming from the 110 like I did). The area seemed clean and nice enough, and a dedicated Parking Lot made stationing the voiture rather easy. From the outside it has plenty of character, the largish rectangular building dates from around the 1930s but looks older. Its name obviously owes its roots to that of the local Red Trolley Cars or Trams that used to run here and judging by the wide open spaced interior, it may have been an original Station Building at some point, hard to tell, but if I had more time to examine the excellent collection of old Photographs inside I may have been able to confirm this. Pictures reflecting the history of the Red Cars and old Torrance abound and are very interesting. A rail line still runs by, I want to say it is the Blue Line but I may be wrong.

From the Parking Lot, a small long thin Patio is visible, but it was empty on my visit. You enter from the Street side through a small door. As you enter an array of Tables fills two-thirds of the left hand side of the building. To the right and set against the wall is an L-Shaped Bar that sports around twenty or so stools. Behind the Bar, the Brewery is on open display and clearly visible. Lots of wooden clad stainless steel vessels add a nice small but quality feel to the equipment. The bar had two sets of Taps, around 8 Taps on each set, but the bartender immediately told me to check the chalkboard as not all the working Taps had handles on them (it seems examining the tap handles is an old habit from my Handpump days back in England that I cant seem to shake).

Just as I was about to order, Mickeymac arrived, and we both went for a pint of the South Bay IPA, a very tasty unfiltered beverage that slipped down well. We both ordered a quick Sandwich, which arrived in good time. I tried a Pastrami sandwich with Fries, extra marks here for having Malt Vinegar and for the fact the bar tender didnt bat an eyelid as I plastered the Fries with it. The South Bay IPA accompanied the food extremely well, but I was soon staring at an empty glass. A second Pint was ordered, but this time we both elected for a change of pace and opted for the South Loop Porter, the other options were a Red and a Special Bitter. The South Loop Porter is a tasty dark beverage that lacked a little carbonation but was nevertheless a decent drop, it certainly seemed the most popular of the beers on offer, and I saw a few Growlers filled with the Porter in the short time I was here. Indeed, they sell their own Growlers and Fills for very reasonable prices. If you are thirsty or a big drinker and not driving, you can even order a Schooner of any of the beers also.

I give Selection a 4, not based on quantity of the offerings, but the quality of them. Nevertheless, for those that value feedback on quantity, it seems like there are no more than 4 regular Red Car beers and 1 Special at any time. OK, not the greatest selection numerically, but what I do like is that this place seems more focused on quality beer, rather than quantity. What it does, it does very well. The bar tender was extremely courteous and chatty, and even went on to explain that they often brew a Winter Warmer which is popular and once a year they have a Pumpkin beer. In addition, a perk of the ears was experienced when he said that they also do a Double-IPA on occassion. I would certainly love to try that!

Well my first Soccer Match in the US ended in a rather sad result for the home Galaxy team, loosing 3-0 to the MetroStars. But I reckon I scored by getting to visit here and sharing a couple of Pints & a Sandwich with Mickeymac who I havent seen in a long while. I would seriously contemplate coming here again if I am in the area and most definitely if I am attending the Home Depot Center, hopefully to see another Footie Match.

A lovely, clean, well run Brewery Restaurant that is a quality outfit, the IPA and Porter are good enough to get me to come back here to try the other offerings at some point. Next time you are nearby on the 405 or 110, and have time, I would strongly suggest that you drop in here!!

I came two years late. You see, I was in Torrance two years ago doing my own "brew tour" when I received a phone call for baseball tickets which I could not reject. That cut my day short, but I'm back. Sitting in downtown Torrance is the Red Car Brewery, which is housed in an old building. The space inside mixes elements of the old building in with a brewery and restaurant. A simple door opens yourself to the brewpub, where lies the restaurant (left) and bar (right). I'll take a stool, thank you. A roomy bar with seating for over a dozen people, the taps sitting in the middle of the bar, brewpub-logoed glassware at each seat to hold checks (if you do this, make sure the glasses are cleaned and the rims aren't chipped). Sports on TV, lots of sunlight entering the room during the afternoon...I think I can relax.

At one end of the bar is a listing of the day's beers, while the menu itself shows its 6 regular beers. During my visit, "only" five house beers available (Big Red, Special Bitter, Motorman, South Bay IPA, Black IPA), available in pints and tasters. I prefer pints, so I ordered the bitter (much too dry) and Motorman (decent). Just standard shaker pints for the main glassware. $6 pints.

I was more hungry than thirsty, so pulled pork was selected along with a side of garlic fries. While the beer's did not excite me, the food certainly did, and it sounds weird to write that I would come back for the food before the beer. Having a helpful bartender also kept my visit going in the right direction.

Would I return? Maybe. The overall experience was fine. Regarding just the beer, there are other breweries which I would hit before Red Car.

I stopped in here recently when I was in the area. It's a fairly small place with a side for tables and dining and then the bar side. I sat at the bar and ordered a sampler flight. The bartender said he was out of 2 of the 5 beers but I saw him pour all 5 so I'm not sure why he was saying that. The quality of the beers was pretty good but they seemed a bit warm straight from the tap. The service was alright but there weren't that many people in there and it took a while to get my check at the end. The selection was limited to 5 of the house beers and a few bottled offerings from other breweries from what I could tell. Prices were reasonable for the beer. To be honest, this is sort of a depressing place and I'm not sure I will be back.

Love this place. One of the best burgers in town and excellent beer. The service is awesome and I love getting a growler of south bay IPA every time I come. Food is all awesome, tons of flavor and a great variety. B-Fast is served all day and you can get a burger rare. I have two kids and the wait team is always awesome to them and everything I ask for from a cup of croutons to cucumbers with the skin cut off I can get. My wife always get a garden salad and even just a regular ol' garden salad is beyond awesome! Fries are some of the best and they have a BBQ/Ranch deep that is pretty awesome. So, from appetizers to Dinner to a bowl of croutons, everything is way above average and not badly priced. Oh, and I almost forgot, they serve a fresh homemade bread (which they make their croutons out of) they serve with oil and vinegar, is pretty awesome too! Comes with every meal in the dinning area, don't know about the bar!