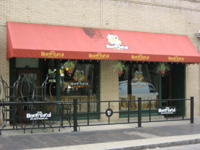 Reviewed by scoobybrew from Indiana

4.11/5  rDev +6.8%
vibe: 4 | quality: 3.5 | service: 4.5 | selection: 4.5
Stopped in here on a recent trip to Cleveland. The wife and I had just come from Great Lakes and the Boneyard was within stumbling distance from our hotel. There is a long bar area with large chalk boards listing the selections. The wood moldings are appropriately decorated with skeletons and the like. They were fairly busy with a late night crowd but we were promptly served. At first I ordered a Paulaner Hefe that was written on the board, but the bartender informed me they were out and recommended the Franziskaner. While I would have known this would be an acceptable substitute, it was nice to have a bartender that knew the beers and could make intelligent suggestions if necessary. Appropriate glassware wasn't available, so this was a minor disappointment. After my wife's first beer - a Hoegaarden - she ordered a Chimay Red which was served with a pint glass. I had an Arrogant Bastard as this was probably the hoppiest thing there. It, naturally, blew my taste buds for about the following 18 hours. Overall, stop in for a drink, but make no mistake, this is a bar - with somewhat unusual character. Good beer is available in copious amounts - be careful.
Jun 21, 2008

3.28/5  rDev -14.8%
vibe: 3 | quality: 3 | service: 3.5 | selection: 3.5
This place was close to my hotel so when I went out for a walk I stopped in. It was a Saturday night and this place was dead, although I'm sure it is packed after baseball games. The decor in this long narrow bar is redneck sports bar with a nice big beer list of 100+ front and center. They had two different channels of bare-knuckle boxing on and some hard rock cranked up.

The beers were organized by what was on tap and what was in bottles with further breakdown by Ales, Ambers, Wheats and Porters/Stouts. The focus was lots of run-of-the-mill beers with Arrogant Bastard and a few other gems tucked in there. I was hoping to find some good local beers but most of the craft beers were west coast. It was next door to a Winking Lizard so this is a good block for beer hunting. I was impressed that they asked if I wanted a chilled or warm glass and they had pleny of both.

Reviewed by Callenak from California

3.93/5  rDev +2.1%
vibe: 4 | quality: 4 | service: 4 | selection: 4.5 | food: 2
Was in Cleveland on business and this spot was less than a mile from my hotel. Had to swing by. It was a Thursday night, the world series was on, and their were probably only 6 people in the bar. The bartenders said it was the slowest Thursday night he's seen. Oh well, just meant I got better service.

Solid selection of beers here. Nothing to spectacular but extensive nonetheless. Being from CA I stuck with only mid-west beers I couldn't normally get. Had a Bell's Oberon a Bell's Kalamazoo and a Goose Island IPA. All very tasty. They were out of quite a few beers and said they would be getting more in the next day, but didn't affect my choices. Pints were only about $4.50 so it was a good deal.

The food sucks (at least what I tried). Just about 5 items to choose from, all fried. But I was there for the beer anyway. If you are in the downtown area, this would be worth a swing by.

Reviewed by mcallister from Ohio

3.36/5  rDev -12.7%
vibe: 3.5 | quality: 3.5 | service: 3 | selection: 3.5
Tried to go here after the Great Lakes BA Blackout tasting. I have been here but didn't review. There weren't many people here yet service was still very slow. This place has a shitload of beer to choose from unfortunately nothing out of the ordinary or exciting. My girlfriend ordered a Brooklyn Blackchocolate stout and I ordered the Bell's Best Brown listed on the draught board. After about 10 minutes of the bartender searching around she came to the conclusion that they had neither of these beers and maybe I should try a New Castle. Because every other beer listed really didn't excite me we decided to hit the Lizard next door.
Oct 10, 2006

Reviewed by DuqTroops from Texas

I usually come here before / after a sporting event, mostly the Indians games. Great specials. Mostly $1 drafts and other inexpensive drinks.

Comfortable and smooth velour couches on both sides. Bar is hard to get drinks because there is usually a lot of people there.

Food is ok, not great, but is a typical bar atmosphere - wood grill.

Lots of great things to drink!

Reviewed by Bierguy5 from Ohio

3.84/5  rDev -0.3%
vibe: 4 | quality: 3.5 | service: 4 | selection: 4
We went to the Boneyard after trying to go to the Lizard, and being treated as if we were not wanted. Walking in looks like a saloon from the wild west. There is a huge barrell filled with peanuts at one entrance. Peanut shells are pretty much everywhere. It was pretty crowded, but it was a Friday night after all. We were able to sit in one corner on a couple of couches, which was a plus. The music was very loud, so trying to have a conversation was a bit difficult. There appeared to be around 40 or so beers on tap, ranging from domestic (BMC), to imports (Franziskaner, Paulaner), to American craft beer (New Holland Mad Hatter, GLBC Ed. Fitz., Conways, Anchor Steam). Good bottle selection as well. Big cheers to the beer list written on the chalkboard above the bar. Even though it was very busy, the bartenders were friendly, and showed some knowledge about their selection. Pints seemed to be about $4.50. Overall, I would have enjoyed it more if it were less smoky, and not as loud. However, there was a good selection, and it seemed to be a friendly place.
Feb 20, 2006

Reviewed by WVbeergeek from West Virginia

4.28/5  rDev +11.2%
vibe: 4 | quality: 4 | service: 4.5 | selection: 4.5
Located right next door to one of the Winking Lizard chains. After the Jack Johnson concert we were looking for a place to eat, so we walked a street over from our hotel to go to the Winking Lizard recommended by the front desk. When we got there the Lizard was closed and the Boneyard Beer Farm seemed like the next reasonable choice. Atmosphere consisted of a nice mix of modern and lighting and when you walk in there's a couch lounge area to the left with peanuts crushed all around on the floors, nice touch. Large draft selection had some rarities like Unibroue Ephemere, but the bottle list was very nice found some Snake River Zonker Stout and Pale ale all the way from Wyoming. Bartender was great stayed open until everybody was ready to leave and recommended a place for us to order pizza from since the kitchen had closed. This place gets my approval had a great time relaxing after the show and talking to new friends we met at our hotel.
Sep 23, 2004
Boneyard Beer Farm in Cleveland, OH
Place rating: 3.85 out of 5 with 7 ratings