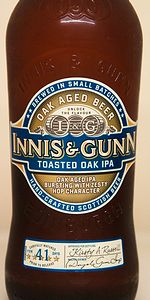 Reviewed by Schoeni from Germany

Reviewed by Voss from Italy

3.3/5  rDev -5.4%
look: 3.75 | smell: 3 | taste: 3.25 | feel: 3.5 | overall: 3.5
My first I&G beer, an IPA, a style I'm not a huge fan of until it has something more than hop flavor and bubblegum smell.
So this is a toasted oak IPA, seems interesting.
Light gold color, a decent head and a honest smell of hops.
Taste is not bad, not aggressive and smoothed by the oak, very rounded for a beer of this style.
I enjoyed it with some barrel aged feta and cheddar.
A good one, nothing so impressive but good.

Reviewed by BRiddoch from Massachusetts

In fact, all spirits begin clear - it's the aging in wooden barrels for long periods of time that give whiskeys, rums and the like their amber complexion. (That, or caramel colouring.) I mention this just to bring up the fact that Toasted Oak IPA, like all Innis & Gunn beers to my knowledge, is not actually aged in a barrel. You may ask: how does it work then?

Barrel-aging is an extremely expensive, specialized and labour intensive process - but soaking oak chips in a particular spirit, say bourbon or Irish whiskey, or in this case simply toasting them, and then throwing them into a batch of beer and letting them float around for a while, that's much easier. With this process you get the wood or spirit but none of their complexities.

Indeed, this aroma has no shortage of freshly-splintered wood to it. It's like being in shop class and building a birdhouse all over again. It has a slight resiny quality, likely teased out by the hops. But that's about all I can say about it, which is disappointing considering oak aging has the potential to offer notes of biscuit, butter, vanilla, smoke, nuts, coffee, leather...

... not to mention toast which, despite being in the name, is curiously absent everywhere else. In fact, the flavour couldn't be further from toasty - it tastes like some kind of tropical island drink. Where's the little toothpick umbrella? It's intensely sugary and vivid tastes of mango, papaya and coconut dominate the palate with virtually no bitterness to keep them in check.

I'll admit to finding Toasted Oak IPA mildly enjoyable - the thing's practically a fruit smoothie! But rating to style, just to recap: British IPAs of the 1800s (or present day for that matter) were not aged on oak chips, did not have pale school bus yellow complexions and certainly did not taste like a Thai dessert. Oh, and they definitely contained at least some bitterness.

Why is it that every Innis & Gunn review I write winds up reading like a kindergarten lesson? I'm not a historian but almost any craft beer drinker could point out what's wrong with this offering or, more accurately, its marketing. Of course, that's just it - marketing is often the best thing about Innis & Gunn beers... unless of course you truly enjoy superficial sweetness.

Reviewed by JonCorbett from Canada (BC)

3.5/5  rDev +0.3%
look: 3.5 | smell: 3.5 | taste: 3.5 | feel: 3.5 | overall: 3.5
This is one of those “commercial” ones that I tend to save just for enjoying when I have company and don’t need to really say what has already been said in these reviews. But being my last bottle it’s always good exercise to take a critical look at even the common beer. But, I will keep this one brief as I hypothesize that this is fairly run-of-the-mill brew and probably a good IPA for those who like a mellower hop profile or need to work into the style. So here it goes.

Aromatics: Very muted tones, the toasty oak is in there, but doesn’t pronounce itself too much, there are subtleties in sweet floral and malt- the bitter earthy/piney that usually comes from the hops in an IPA is absent, as is any citrus character. So basically, nothing to scare aware the average joe beer guy.

Taste: Very delicate bitter, more earth green flavours than say a citrus peel bitter. Toasted oak shows through though on the finish and likes to sit at the sides of the tongue. There is also a gentle spiciness to it that is probably more psychologically sensed than actual.

Feel: Pretty smooth and unassuming, though light carbonation takes its time to make sure the flavour is delivered across the palate, it is not overly crisp. Fairly light bodies for an IPA, but I kind of like that. Cleary formulated to be modest in its IPA boldness and balanced so there is no competing flavours between the hops and malts.

Overall: I like Innis & Gunn for there quality brew over the common North American offerings. They still have a pretty good respect for the craft of brewing even though their operation is no doubt not considered a micro-brewery but also not as large as a Labatts/Molson. They have the vibe of a Rickards or Sleemans to me. Anyhoo, a decent enough IPA not really lacking anything, but also nothing really extraordinary to give either. Just and overall pleasant brew to enjoy - by North American standards a little shy on the bitter, but it is good for those who want to switch it ups and try something other than a common commercial brew without getting trapped into a school lesson on what an IPA is.

Overall: Another pretty enjoyable beer by I&G. So far my least favorite of their beers is their Original Ale (their flagship) perhaps because it's the one with the most pronounced oak character (which I'm not a huge fan of). The oak in this particular beer is there but it's not overwhelming and complements all the other aromas/flavors really nicely.

Reviewed by Sheppard from Massachusetts

Reviewed by JPadilla from Florida