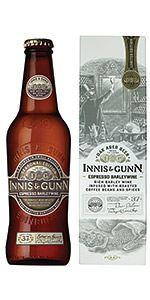 A- Pours a dark copper color with red and dark brown hues...it is clear and robust looking. The head is a quarter inch in thickness and disappears rather quickly into a patchy foam layer over the brew...not that impressive. The lacing is good with cyclone like arms wrapping around the glass in a swirl like fashion...nice! Carbonation looks to be reasonably aggressive in how it rises to the top...plenty of columns.

S- This is probably one of the weirdest smelling beers I've ever encountered....and I don't think I like it really.....smells of cheap Worcestershire sauce....vinegar, cooking spices and sour.....Caribbean curry, which I like but not in a beer. There are perhaps hints of deep brown sugar, burnt malt and very slight coffee grind....old grinds....they have started to mold over....not good....Yuck!

T- Again, weird, but not nearly as bad as I had anticipated. Think burnt or at the very least severely toasted root beer in character. I get bitter stong coffee, but balancing dark toffee/molasses, brown sugar, artificial vanilla extract, oaked whisky character, sarsaparilla.....it still has this weird Worcestershire tang and my buddy suggested a sweet onion mustard.....hmmm

M/O- Light/medium body, smooth carbonation and slightly boozy.....this area is good I guess. Overall, I would definitely pass on this beer....poor aroma, average at best flavor and not a good mixture from the otherwise excellent I&G brewery.....Mace is not a good additive to a beer.....espresso is lacking and too much exotic spice/tang. Well at least I tried this....my buddy likes it....not sure what he's thinking lol....a premium swill! I'm being generous with this rating as my friend likes it and I'm trying my best to compromise.....give this a full point less than what I have listed here.....at least they had the 'kegs' to try something different....much different

Pours a deep ruby body with an off white head that quickly dissipates. The scent is strong in roast malt and spiciness, with a faint touch of coffee-like bitterness and a fair bit of alcohol. The taste is strong in its bitterness and spicy flavours, with alcohol and some fruitiness very present at the front of the palate. Also cloves and cinnamon. The feel is fairly smooth, though the bitterness is still high here. Overall a very good beer, but too strong for all the time.

Released in december 2015 at Systembolaget, Sweden.

I've promised myself NOT to try any IG any more but I bought one anyway... Maybe it was the Christmas spirit... I don't know!

Anyway, it comes in a nice package and it looks great, almost like it has a long heritage....

330ml brown bottle - lots going on here, with the expected 'oak' aging, and the addition of some English empire-sounding spices.

This beer pours a clear, dark red-brick amber colour, with three fingers of puffy, loosely foamy, and bubbly tan head, which leaves some decent cobwebbed lace around the glass as it slowly and evenly subsides.

The carbonation is quite light in its mostly barely palpable frothiness, the body a so-so medium weight, and sort of smooth, the spice muddling about just a bit too much, but not enough to deter a burgeoning creaminess. It finishes sweet, full of caramel and vanilla, and some waning spice and wan espresso character.

Yup, this started off promising, in the 'it's not a typical I&G joint' (its actual appeal is another issue altogether), but then dropped the pretense, and got all sweet and cloying. The espresso and the spices add another dimension, sure, but in a disjointed, and not at all satisfying manner. Keep at it, lads, you've got a good thing going here, apparently - it's just not for me.

This was a weird one. Not what I would call a barley wine but to each their own. I split a bottle with my brother and the first half of my half was enjoyable the second half was over whelping and syrupy