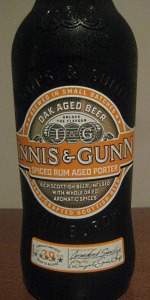 Reviewed from notes. This was poured into the Innis and Gunn tulip. The appearance was a nice hazy brown color with some light red tinges around the edges of the glass. There was a decent one finger white foamy head that dissipated within less than a million. There was a moderate amount of white foamy lacing trickling down the glass. The smell had a nice toasted oaky vanilla to glaze over top of a light rum. The taste was sweet and oaky along with the rum but not in an overly boozy way. On the palate, this one sat right at medium on the body with a fairly decent sessionable aspect about it. The carbonation was pretty smooth. Overall, this was a pretty good beer worthy of coming back to.

Innis & Gunn 'Spiced Rum Porter' @ 7.4% , served from a 330 ml bottle purchased for $3.55
A-pour is a cola brown from the bottle to a dark brown in the glass with a small thin tan head leaving a fine spotty lace along the pint
S-spicey rum
T-sweet spicey rum start , you can feel the ABV
MF-ok carbonation , feels full bodied
Ov-decent enough dessert porter
prost LampertLand

This one comes across heavily spiced on the nose with ginger and cinnamon alongside subtle burnt grains and hints of vanilla. Flavour is much the same with the spices overwhelming the palette and completely decimating any chance of rum barrel aging presence. Reminiscent of a 'pumpkin spiced' ale from a flavpur profile stand-point. Ultimately I just read the label wrong, I expected a porter aged in spiced rum barrels, not to be confused with a spiced porter aged in rum barrels. I won't make that mistake again.

Appearance - Chesnut brown with garnet highlights. A thing half finger of loose tan head rests on top and sticks around for a couple of minutes. Good clarity but bordering on being sufficiently dark that the doesn't appear transparent.

Smell - Sweet vanilla with a candied rum aroma. Some oak as well, but sweetness is first thought. Smells boozy like it could be a higher ABV beer than what it is. Subtle spices definitely intertwined with the beer, some cinnamon and nutmeg among other things.

Taste - Some vanilla and oak with plenty of spices. Cinnamon and Christmas cake show here. Sweetness is reined in just enough otherwise this would be pleasant. I'm getting ginger here too. Flavor seems thin and lacking the depth of a good porter.

Mouthfeel - Really thin for a porter, more like a spiced scottish ale. Mouthfeel is soft with low carbonation which works here, but for a porter disappointing.

Overall - This started pretty good, but the flavors are a little thin and there's just not quite enough substance. The sweetness can get abrasive towards the end of the bottle too. If you're a fan of the Innis and Gunn offerings, you'll probably like this, but many of their other seasonals (some quite good and some merely so-so) are superior to this.

330 mL bottle from the LCBO; best before Aug 2017 and served slightly chilled.

Pours a clear, deep-hued copper-amber colour with brilliant ruby-red highlights, sporting one finger of soapy, light beige-tinted froth that weakens and fades within a few minutes. It leaves behind a creamy-looking, decent-sized collar of foam, in addition to a thin cap; not much in the way of lace. Kind of smells like a spice rack - nutmeg, vanilla and ginger, with hints of cinnamon and clove. The rest of the nose almost seems downright muted next to the assertive spiciness, but that's just speaking relatively - I can still detect notes of toffee, butterscotch, oak and gold rum without too much effort. Not bad, but the spices give it a bit of a potpourri vibe that I'm not super fond of.

Not a very cohesive quaffer, but otherwise unobjectionable. Flavours of gingerbread come through alongside the typical toffee, butterscotch and vanilla notes that are basically this brewery's calling card. The spice character is pronounced, with nutmeg and ginger being perhaps the most noticeable culprits; cinnamon, allspice and clove somewhat less-so, with most of these flavours lasting to the finish, which has a root beer-like quality, followed by a light hint of gold rum. Light-medium in body, with low carbonation and a bit of a thin/watery texture, to be honest. It's drinkable - not that bad, but not really that good, either.

Final Grade: 3.47, a serviceable B-. Innis & Gunn's Spiced Rum Aged Porter is a bit of a mixed bag. The spices sort of dampen everything else IMO, which severely limits its drinkability - and possibly its tolerability, depending on your tastes. I've been drinking I&G brews for quite a few years now, and while I've largely lost my enthusiasm for continuing to do so, I will give them some credit and say that they really, truly do seem to at least try to be creative. As usual, I appreciate the effort here, but this one just didn't do it for me - the base porter needs to be beefed up a bit if you're going to use this much spice. Recommended to fans of spiced winter warmers.

A- Pours dark ruby topped by an off-white 1 1/2 finger head that quickly works down to a thin cap.

T- Much like the aroma. No hop presence and a sweet overall flavour. Slight rum

O- Some good flavours here that make for a good sipper on an Autumn evening. Not something that I could drink more than one of in a sitting. Perfect dessert beer.

A- This pours a clear-ish root beer/cola color but unfortunately doesn't have much in terms of a head....rather a white thin ring engulfs the rim of the glass. There appears to be plenty of carbonation and it's somewhat aggressive in nature, and as for the lacing, it is quite alright, with many small clumps of foam hanging onto the side of my glass. Above average but could be a little nicer in looks.

S- This gets much higher points! Initial friendly aromas that remind me immediately of sweet root beer but with a woody, rummy baking spice quality about it....think of the hard root beers on the market these days and amplify it by 10! Vanilla, bubble gum, clove/allspice, heavy caramel malts, cinnamon and perhaps even slightly peppery. This has lots of potential!...

T- The flavors are very similar to the aromas and follow closely, but to a milder degree....the rootbeer aspect is noted, and the spice is also there....reminds me of fall baking....cloves, allspice, cinnamon are all there, with a dash of vanilla...pumpkin pie spice could describe it! The finish is dry and slightly bitter, which helps round out the entirety of the flavor profile!

M/O- Light/medium body and the carbonation is what it looked to be.....plentiful and zingy on the palate....The more I have of this, the more I'm liking it and feel this is a highly drinkable aged Porter. I recommend this one while it's around....Cheers!!

330ml brown bottle - there have been other spiced rum offerings from this outfit, but now it's a porter (even though it is indeed described as 'Scottish beer').

This beer pours a clear, dark red-brick brown colour, with one finger of puffy, loosely foamy, and bubbly tan head, which leaves a bit of isolated wavecrest lace around the glass as it quickly blows off.

The bubbles are fairly restrained in their basically supportive frothiness, the body a decent medium weight, and sort of smooth, as those almost sugary spices take a minor ounce or so of proverbial flesh here. It finishes off-dry, the holiday confection spice and otherwise sweet malt and oaken notes not really interested in any other lifestyle choice, as it were.

Overall, I'll give this one some credit for not overtly coming across in the typical buttery caramel-forward I&G manner. The spices do well to keep this one from going off the sweetness charts, what with all the other sundry saccharine players. Worthy of a try, especially if, like yours truly, you've more or less given up hope for this brewery's wares.