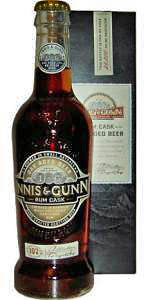 Single (clear) bottle picked up from the LCBO.

Poured into an Affligem chalice. A nice ruby-chestnut hue (not entirely unlike a dark rum), the pour leaves a thin layer of head that recedes rather quickly.

Flavorful, intriguing, but certainly a one-sided brew. The sweetness becomes almost cloying, and there aren't enough other flavors to keep things in check. The candied rum taste is quite nice, and theres a subtle graininess and smoke character, but generally this is sweet, rummy beer. If there's oak, it's well-hidden.

Not bad - like a lot of Innis and Gunn offerings, I find it's an interesting brew to try, but the effect wears off after a while. Too sweet, and not enough other characteristics to hold my interest.

Poured from the 11.2 oz. bottle into a Samuel Adams English nonick.

a: Clear copper with a finger thick offwhite head which receded to even surface foam and
briefly dense lacing.

s: Rum and caramel malt. The most divine-smelling stuff ever.

t; Same as the nose, a very tasty combination, with some bite following and leaving some bitterness at the back sides of the tongue.

m; Medium. Good body and a lot of carbonation tingle.

o; A favorite taste treat. Stiff competition from Founders Backwoods Bastard and one or two other cask aged brews, but still an affordable year-round imbiber's confection.

Coming out of the bottle it pours a translucent brown which once in the glass settles into an almost opaque brown. As the name suggests, there is a rum aroma and taste. You can also taste the oak. I am not crazy about the finish since rum has never been my favorite liquor. There is too much of a medicine like after taste for me. The feel is refreshing in a soda like way. Perhaps the mouth feel and color makes me feel like I am drinking a Coke. I am not as familiar with this style and perhaps need to get used to it. Will try other examples of this style and perhaps re-evaluate my rating. However, for now I do not see myself buying this one anytime soon.

A: A dark amber color with a thin line of bubbles on top.

S: Toasted malt with a fruity rum and oak aroma.

T: Sweet toasted malt and a fruity rum, vanilla, oak flavor. The finish is very sweet and a little buttery.

M: Its got an ok body to it. Hardly any carbonation.

O: It's an ok beer. Easy to drink, except for the excessive sweetness, which I didn't particularly like.

Pours a dark red and brown with a nice reddish white hue head. The smell is slightly better than ok. Not overpowering on any level or better said sort of a duller smell for a rum oak beer. The taste is dreamt sweet oak taste. The rum hides in the background, probably the sweet taste impn the oak. The nice part is the oak isn't too crazy like many oak beers can be. The mouthfeel is nice too with a smooth creamy feel. The only knock would be is on the flatter side. Kind of feels like the beer has been sitting around too long. Overall, I'm on an Innis and Gunn kick. This is another very well put together beer. I guess they are perfecting barrel aging process.

Poured into a Sam Adams glass.

Crystal clear medium brown ale with a 1 finger light tan head that disipated quickly leaving no lace, just a thin layer of small bubbles across the top of the beer. That layer did not persist through the drink. By half glass the bubbles were gone. Even in a Sam Adams glass with a nucleation ring.

Initial smell was not what I expected. I was afraid it had gone bad being in a clear bottle. That must have been a blend of the oak and rum that just smelled off to me. That smell mellowed after a bit. Smells of oak, rum, yeast, and malt.

Taste did not follow nose. It's quite good. Wood, rum, raisins, some hop bitter, sweet but not too sweet. Some carmel and some earthy tones typical of a Scottish ale.

Smooth with a bit of fizz. Light to medium body, but not watery. Easy to drink.

An interesting change. I like oaked beers, this adds just a little extra with the rum. Maybe not as strong an influence as bourbon aging (which I cant drink, whiskey makes me gag ever since a particular night at college) but the rum adds a special quality that I enjoy.

a: dark brown with a ruby hue. minimal head.

s: oak. the toffee smell you expect from the original is there, with a little bit of alcohol lingering.

t: at first is reminiscent of the original Innis and Gunn but then I got a taste of a spicy sweet alcohol presence. not hoppy at all but I don't have a problem with that if it is all oaked up.

m: creamy and sticky. lack of head on the initial pour but this beer is definitely carbonated.

o: this is definitely a great beer, and tonight I was lucky to get the 750ml for $5 so no complaints! I still enjoy the original more, cheers!

Pours quite flat, clear red colour. Not much of a smell. Tastes a bit sweet, a bit more hops would not have hurt.