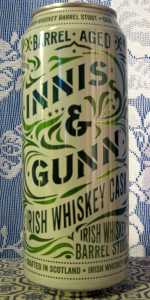 Notes:
View: Beers
Reviews: 4 | Ratings: 9 | Log in to view all ratings and sort

Poured from 11.2oz bottle into a dimpled mug.

Appearance: totally black with a finger of frothy tan foam atop. It looks the part of a stout, that's for sure.

Smell: aroma is lovely; malty, a little sweet, and with a toffee and raisin quality that I really like. Great!

Taste: flavor is rich, with some toffee and chocolate but also raisins, tobacco and roast. I don't get a whole lot of whiskey barrel here, but in general it's smooth and full of flavor.

Mouthfeel: medium body with a decent carbonation and OK creaminess. I would like a little more from the texture.

Overall: though I would like a little more body in this beer, overall it's a tasty and interesting stout. I dig it.

From the bottle, it pours a dark brown with a modest head, soon diminishing to nice light brown ring and leaves lacing. In the nose, it smells of chocolate and roasted malt. In the mouth, it is roasted malt and a bit of alcohol.

500 mL can from the LCBO; best before Apr 2021 and served slightly chilled. I&G has shipped an "Irish Whiskey Cask" to Canada in the past, though that particular beer has had several slightly different names over time... and while I'm at it, their semi-recent Kindred Spirits was also a 6.1% Irish whiskey BA stout. So this could be a new beer, a tweak on an old recipe, or just a re-named product, and I have no idea which.

Pours dark brown like cola, capped with less than a finger of tight, creamy, khaki-coloured head that falls apart within ninety seconds or so. A modest-sized collar of froth remains in place, encircling an even layer of film upon the surface; not a lot of lace, but it looks decent enough. It smells of whiskey, oak and molasses, with decent helpings of vanilla and coffee tossed into the mix as well; the alcohol is evident without being obvious.

A pretty standard affair by this brewer's standards - the whiskey and oak are prominent throughout, with flavours of caramelized malt and molasses sweetness also apparent at the forefront. Subtle hints of vanilla and roasted malts develop by mid-sip, the latter imparting touches of cocoa and coffee that help contrast against the sweetness - but to no avail, as the conclusion of the sip is mostly just boozy and sugary, with suggestions of oak continuing into the aftertaste. Light-medium in body, with low carbonation levels and a smooth texture that contribute to this strong stout's excellent drinkability.

Final Grade: 3.75, a B+. I enjoyed my glass of Irish Whiskey Cask, and I'm sure I'll return to it again in the near future. My gut feeling is that this isn't much different from Kindred Spirits, and might actually be the same beer aged in a different type of Irish whiskey barrel (as there's no longer any mention of Tullamore, and it's cheaper, but the label's tasting notes are otherwise identical). Either way, it's pretty good value for the price, so as I say about almost every I&G product: if you liked their Original, you'll most likely enjoy this, too.

Not sure if this is a separate beer, I&G's offerings are all blending together if they haven't already done so. Irish Whiskey Cask. 6.1% ABV. 500 ml can purchased form the LCBO for $3.25 CDN. Served cold into a pint glass.

Appearance - Dark brown, near black with a solid two fingers of light tan that coalesces into a thicker denser head at one finger. Great staying power and modest lacing.

Smell - Quite a bit of sweetness, hints of caramel and treacle with a touch of boozy sweetness. Not a huge nose, but decent enough.

Taste - some sweetness, vanilla, caramel up front, hints of coffee at the back, a bit of earthiness in between. Middling bitterness an the booze is well concealed. Nothing spectacular, but also tasty enough brew on its own. This brew has an element of Bailey's to it which maybe enhances the Irish character.

Overall - A bit sweet but a good brew and the flavor to ABV to price quotient is fairly attractive too. Another solid offering from these guys, may have to return to this one as it is better than many of their similar offerings.

Irish Whiskey Cask from Innis & Gunn
Beer rating: 3.87 out of 5 with 9 ratings