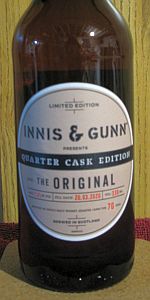 330 mL bottle from a gift pack purchased at the LCBO; best before Aug 2023 and served barely chilled.

Pours a clear golden amber colour, topped with one finger of foamy, bubbly white head that dissipates within two or three minutes. A generous collar of frothy suds remains in place, encircling a thin layer of film; a few strands of lace are also tossed about in the process. Butterscotch and toffee on the nose, with additional hints of bready malts, oak, vanilla and honey biscuit; subtle hints of whisky and sultana raisin. Pleasant aroma - similar to their Original, but with a little more oomph.

The same can basically be said of the flavour profile, which features the same bready malts, caramelized sugars and toffee notes of the Original. The difference here is that the casks are able to lend a more robust oak flavour than usual, with the vanilla and whisky elements also getting a little more emphasis. Hints of raisin and earthy, herbal hops towards the finish, as toffee, oak, vanilla and booze linger into the aftertaste, along with a touch of dried fruits. Medium-full in body, with average carbonation levels that give a little bit of crispness to this brew's smooth, slightly slick mouthfeel. This small serving size is probably about right for a beer of its strength, but I still wanted more.

Final Grade: 4.04, an A-. It's better than their Original, but I&G did not exactly re-invent the wheel with their Quarter Cask Edition. The general vibe is along the same lines, but with more oak cask character packed in. This came in a gift pack, so I can't comment on its price/value, but if they brought it back as a single for under $5, I think it'd be worth the price of admission. A no-brainer for fans of Innis & Gunn's shtick, but also worth a look if you're just a fan of malt-forward British ales or oaked beer in general.