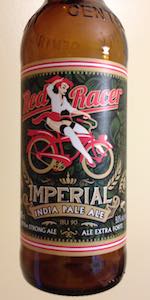 Pours a clear, vibrant amber-orange colour, generating one finger's worth of frothy, off white-coloured head. It lasts for a little over two minutes; a modest, foamy collar remains, along with some patchy lacing. Caramel, honey, bready malts and raisin butter tart on the nose, along with notes of grapefruit, pineapple juice, orange, dank pine resin and floral hops. Noticeably boozy, too; not a bad aroma, but nothing really stands out to me.

Sweet, fruit-forward flavour profile that seems more well-balanced than this style is apt to be. Caramel and bready malts provide the backdrop, with fruity flavours of apricot, lychee, mango and pineapple following closely in tow. Big notes of pine resin, grapefruit and tangerine toward the back end, culminating in a surprisingly understated bittersweet, fruity aftertaste. Surprisingly restrained astringency for the stated 90 IBUs. Nearing full-bodied, with a creamy, smooth, generously-weighted mouthfeel augmented by light carbonation that gently agitates the palate.

Final Grade: 4.15, an A-. Red Racer Imperial IPA is considered one of the best DIPAs in Canada, and for good reason - it's really delicious, while also being unexpectedly well-balanced and quaffable. While this isn't the freshest bottle in the world (thanks, LCBO), it's still drinking nicely, and has convinced me to pick up another (hopefully younger) bottle in the future, if given the opportunity. Oddly enough I think I prefer the regular Red Racer IPA, but this is still a truly solid Imperial version that all hopheads should seek out and try ASAP.

Enjoyed 12 oz. on tap at Beer Revolution in Calgary. What a great place, truly. Arrived in a stemmed glass, a dark reddish amber color like strong herbal tea with around an inch of beige foam. High, high expectations going in, as this brew's little brother Red Racer IPA is one of the best hoppy craft beers in Canada (my opinion of course ... I think I can back it up). Red Racer smells very floral and piney, and this beefed-up take follows suit nicely. What are really striking though, on both nose and palate, are the heady tropical fruit notes. I get a shit ton of lychee, mango, and papaya, along with some classic American hop gooseberry "funk" and orange breakfast crystals. Mellow pine resin, peach, pineapple, salt water taffy, bergamot orange like Earl Grey tea, tobacco flower, fruit roll-up ... All kinds of layers here. Many of these elements can be traced to Citra hops, applied with a lavish hand. Some orange peel flavor adds citric character but in all honesty this is one of the more perfumed and tropical DIPAs I've had, with these components trumping the citrus and pine. The malts take a back seat to the hops but do provide some light toast and caramel flavors, just to remind you that this does indeed contain barley. As the tongue acclimatizes to the fruit flavors, more molasses and pine come through and a pleasant lingering bitterness emerges, almost medicinal like gin. Fairly fizzy but this somehow works, syrupy but smooth. Awesome and nearly beyond reproach. Maybe some will want more pine. This one is juicy and the booze is almost perfectly obfuscated. It is as if someone took Red Racer, kept much of the aggression, but rounded off some of the corners and layered on more tropical fruit.

A- Opens well and pours a 1" high white head films out within a two minutes or so. Very dark yellow colour and filtered clear

T- Lots of malt and hops here. Very heavy handed hops here. Malt is heavy and sweet. Nice blend. Gets a bit bitter at the end.

O- Nice overall blend. Has a wonderful full and rich body to it that shines through. I like this one. Would like to try it fresh.

This nice little brew went well with....... Roasted pork loin encrusted in peppercorns and salt. Low and slow get the fat rendering.

Too sweetened but drinkable. Hopped well.

Poured from a bomber bottle into an IPA glass. Purchased for ~$9 at B's Craft Beer Lounge in Langley, BC.

Overall - Fantastic Imperial IPA. Big and juicy, on the sweeter side. Would buy it again and actively seek it out.