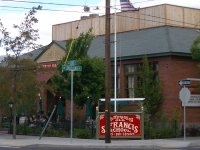 My experience was similar to what others have said here. It's beautiful in here, with an interesting mix of rugged wood/exposed beam and artsy/hipster decor. The service was fast and very friendly. As a stop for solely food and beer, it doesn't really stand up to some of the other choices in bend, but don't let that stop you from trying this place out if you're looking for a nice dinner/ date spot, and have a couple days to explore.

I stopped into this McMenamins during my annual Bend pilgrimage this weekend. For the most part, it's like other McMenamins locations, with a similar array of beers available. There were about 10 beers available, with several chain standards plus a few I've only seen at this location.

Service was very good despite being a busy holiday weekend, which is appreciated. I wil also say that this is definitely the prettiest McMenamins I've been to, with a four-sided central bar with a copper top and a big skylight shining down. Neat stuff.

Stayed here one night while in bend. As a brewpub, it's mediocre... but as a weird hipster beer hotel/resort it's kind of awe inspiring. They have done a really neat job of restoring the building and adding their own quirky touches to the place. Murals in the hallways, custom headboards for the beds, a movie theater, three totally different bars, a soaking pool. The place is crazy. The beer is average, and the food in the pub was about on the same level. Service in the hotel was excellent, in the pub it was only good enough. Overall, it is a must see in bend, but not for the beer of food, really best experienced by staying there. At only about ten dollars a night more to stay here than the Double tree a couple of blocks away it was a great price and it was a very cool experience.

For some reason I thought this place was somewhere on the outskirts of town, whereas in reality, it's right on Bond Street, a short couple of blocks from Deschutes. As it was around lunch time, we decided to pop into the pub for quick bite and a beer. The main pub/restaurant is pretty decent size, with lots of wood all around, giving the place the appearance of an old, English style pub. As is typical with McM's outposts, there were plenty of plants, the usual artwork, and even a couple of TV sets. There's a horseshoe shaped bar area as you walk up the short stairs in from the street, with the dining area spread out all around, back from the bar. This is definitely a comfortable spot to hang out with a beer or three on a warm afternoon in Bend.

As for the beer selection, there was the usual line-up of Ruby, Terminator Stout and Hammerhead, along with a pils I hadn't seen before, a couple of IPA's, a wheat, an ESB and maybe the black rabbit porter. For a McM's, I thought the pub had a fairly good selection, and I'm guessing having an on-site brewery probably has a lot to do with that. I got the pils to go with my lunch (the nachos with pulled pork), and as is fairly typical, it was a solid offering, but certainly nothing that would make me forget about the Heater Allen version or the Upright pils (the two best I've encountered so far in the NW). In any event, it went well with the nachos.

Service was prettty good. Our orders came fairly quickly, and I felt like our waitress was making an extra effort to make sure we were well taken care of, and were satisfied with our meal. The food here was much like the beer; nothing exraordinary, but decent, satisfying and filling otherwise. The tavern salad the GF got had plenty of veggies, and everything was very fresh tasting. Prices were fairly reasonable. I think my beer, the salad and the nachos came to around $27.

This is a solid place, but there is a lot to do and see in Bend, and frankly the food here paled in comparison to every other place we ate at over the weekend. Likewise, the beer here is decent, but hardly anything to write home about, and it's pretty hard to imagine picking any of the McM stable of beers over what you can find all over town from Boneyard. My guess is that we won't be back any time soon.