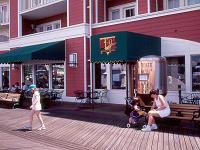 Stopped in on a Saturday afternoon during the holiday season at WDW with my wife and her dad. First the place is almost easy to miss if you don't know what you are looking for. It is located among the restaurants at Disney's Boardwalk Resort (you don't need a Theme Park ticket to visit). There is both outside and inside seating. The seating and the whole atmosphere was a little hectic (which was to be expected during the holiday rush); still, it was peaceful enough that we could speak to each other in normal voices. If you don't like kids avoid the place. Our server was excellent and either had a love for beer or was awfully well trained in faking it. We ordered a couple samplers (7 3.5 oz samples) and she was able to clearly explain each beer (almost too in depth for me but I listened carefully out of courtesy). The beers were all solid - nothing outstanding but certainly way above standard domestic BMC offerings. We had burgers and turkey sandwiches and they were both very good - no one walked out hungry. I was watching what others were being served and it all looked pretty good (the nachos that a family near us got looked like it could feed 3). Considering the total tab (including a 10 buck tip) for three lunches and two samplers plus an additional pint was 68 bucks the place is cheap by Disney standards.

Places like this serve as an excellent introduction to craft beer. Nothing extreme and the Southern Flyer Light Lager should satisfy even the most hard core BL fan.

My recommendation to anyone who may be visiting EPCOT would be to venture out the back gate to this place for lunch - it's only about a 5 minute walk and certainly far superior to any beer you'll get inside the park.

Big River is located on the Boardwalk in the Epcot resort area. There are several Disney hotels within easy walking distance from each other. At the Boardwalk you'll find shops, restaurants, water taxi dock, games, and entertainment.

Once you enter the Big River Grille, they have a bar area directly in front with monitors along with another "strip" type table and seating area between the bar and entrance, if the bar area is filled up, along with traditional tables and chairs. They don't carry guest beers, so the tap is Big River beers. I had a sour and Hefeweizen on two separate visits. Good beers.

Nice place to grab craft beers on the Boardwalk or if staying at one of the nearby Disney resorts. I enjoyed my visits here.

This is based upon a couple of different visits over the course of multiple years.

In all honesty, this is the kind of place that probably shouldn't be good. It's very close to being located inside of a Disney park, it's a brewpub chain, and they have to cater to tastes of all sorts from around the world. I fully expected Florida Beer Co level stuff at best.

Yet the beers are honestly quite good. They aren't boring or dumbed down either. The flagships are what you'd expect (red, brown, pils, weiss, pale) but they're very well made. In fact, they're better than anything short of say, Cigar City or Funky Buddha, that you'll find in that area. The pils is particularly good, and that's a compliment I don't give all that often. In addition to those beers, they also have a few seasonals that give the brewers some room to branch out. Those include a wonderful English Barleywine and a Citra IPA that tasted modern and would satiate a serious hophead. A quick glance at the equipment (and the Weyermann bags) shows that these guys are serious about what they do. I guess Gordon Biersch owns them, so that probably explains some of it.

The rub is that the food is actually holding the place back. As surprisingly good as the beers might be, the food is pretty weak. I'm all for bar food, but it's just not particularly good bar food. It's akin to something like TGI Fridays or Chili's, but probably not as good and about twice as expensive. Skip the food unless you just want a snack like some nachos. There's much better food to be had elsewhere on the Boardwalk, inside Epcot, or in Swan/Dolphin resorts. Beer-wise that's not necessarily the case, though.

Sit at the bar and grab a couple beers and maybe a small snack if you need. You'll be surprised just like I was.

Only 5 beers on tap, but the three we had were excellent. Only had the beer cheddar soup, but it was EXCELLENT. Scott also did a great job behind the bar. Overall, a bit pricey, but still a very good experience.

This place had great beer selection of there own micro brew ...got a sampler and there was not one bad choice ...great description of each beer on the menus ...the food was also top notch Kobe burger was great and the nochos were hands down the best I ever ate ... If you are in Disney resorts check this place out for sure .. In boardwalk Disney resort ..