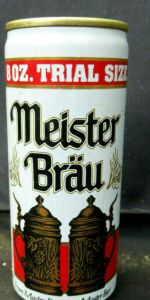 Notes:
View: Beers
Reviews: 27 | Ratings: 79 | Log in to view all ratings and sort
Reviews by tgbljb:

Watching American Beer made me fell like going back to revisit this beer. I had forgotton how tasteless it is. Poured a pale yello color with white head. Smell is a little sweet but not much else. Taste is difficult to find but is an adequate thirst quencher. Not summer afternoon beer.

Back in college, when you could get a case of these bottles for about $6, the only way you could consume them was via beer bong. That way, the taste could be avoided, allowing the alcohol to reach the bloodstream without being rejected involuntarily by your body.

Once, on a lark, I took a big swig from a bottle instead. This was 24 years ago, but I still remember what registered in my brain as this swill hit my taste buds: Purple.

A few minutes later, I was puking.

first beer I ever had, of course out of a can and maybe even a steel can instead of an aluminum can this was the first budget discount beer brand that I can remember being aware of

Mister Beer is pretty damn crappy. Had some the other day as some cheap bastard couldn't pitch in an extra buck or two to get Schlitz. Oy, what a mistake. The first sip flashed me back to playing a game of "pass-out" with this stuff where we all had to induce vomitting to drink more. Ah ... to be 18 and stupid again. Wait ... I just was by drinking it. This is a last resort drink.

Presentation: 12 oz can with a white back ground, two gothic looking steins and semi cursive letters &#8230; yikes! Never seen a can try to look to intimidating No freshness date.

Appearance: Very pale yellow in colour, a soda like carbonation races to the top selfishly to leave the brew and not help with the head retention.

Taste: Crisp none the less, light bodied to a t and an extremely thin mouth feel of slightly coarse grain. Quick flash of malt flavour, it comes through quick with a graininess in its trail. Hops are strained beyond recognition, hop flavour is totally muted. Raw grits or corn meal comes to mind within the semi coarse graininess. Clean all around with not much flavour to give anywhere it stays in the very dry range of American lagers.

Mister Beer. This just a terrible beer. Very watery with a slight bitterness. The mouthfeel is bizarre, almost soap-like (anybody ever get their mouth washed out with soap as a kid?). Not worth the effort to pick up, buy or drink.

Ahh. Good old "Mess Yer Trou." It takes me back to the days when Dad & I would head over to a little 1/4 mile dirt oval in Binghamton with a cooler of beer in cans. We'd try a different brew every week, just because. This is one of the few that managed to NOT get finished at the track. So when a friend (I use the term loosely) left a can at the house last week...

Aroma: Cheapass beer, straight from the barstool. Pours bright yellow (found this out by watching it come out of the can and into my piehole while looking in a mirror). Taste is pure inexpensive - yeah, there's some malt, but a lot of other things that cows eat as well, and nary a hop to be found. Finishes slightly sweet, with a "ten of these and you'll think that someone hooked up the song birds outside your window to Marshall stacks" hangover promise.

Don't do this to yourself.

Light very pale straw and almost crystal clear. Quick rising bubbles, almost no head. No lace. Smells slightly pungent and sweet with traces of corn. Taste is somewhat dry and crisp, almost seltzery. Very light flavor. Almost non-existent. Sweetens up sickeningly as it warms. Please, for the love of God, drink this cold or you will get ill.

After taking a quick look at the other reviews here I have to laugh. In college I thought this was the worst beer I'd ever had, and keep in mind, I was pretty familiar with beer at that point (Watney's Red Barrel, John Courage, Bass, Guinness, Whitbread, Mooshead, Molson, Labatt's, Bud-Miller-Coors, Heineken, Grolsch, etc.). I didn't mind cheap beer, but Meister Brau got to me. And, not unlike other reviewers, I find it the same today. I've probably had other beers that were just as cheaply made, but I can't think of any of them now (perhaps Old Style). So what is it? Well, it's just that there's so much adjunct in use. It's got that sweetness to it. And there are next to no hops. It's almost like the alcohol balances it. Well, at least tries to balance it. I recently saw someone question on-line "What happens if you make beer without hops"? "What's it like?" "Has anyone tried it?" ... I guess whomever came up with this one did! But that's not the real problem. The real problem is that it's clearly fermented pretty fast and hot. It's got a lot of yeasty fruitiness to it. And, I think, some higher alcohols. But on the up side, it's inexpensive.

I still remember the advertisement, "tastes like Bud, but half the cost". Now there's a marketing gem. It does taste like bud, aweful. And now that I don't have to stand in front of a package store and ask people to buy for me, I can afford Bud, not that I would drink it.

Not to bad for crap
Thin fizzy pale head gone in a flash.
The body was super clean almost clear plenty of fizz. The smell was awful almost stopped me from drinking it,
the taste was that of a mass produced beer. a faint taste of malt and hops but nothing to even think about. Aftertaste was a little skunked
but not to heavy.
This one is better straight out of the can the tinny taste covers up the crappie beer taste. Must be Ice cold!!

The German mug on the can, and of course the name, hint at a fine german beer. Not quite. It pours with a scant head, dark straw in color. Smell is of grain. Decent carbonation. Taste is of grain, corn (grits?) in particular, with mild to non-existant hoppiness. Flavor is of a cheap beer. This beer is hard to find even in cans, and I would like to try it in bottle if I can find it.

The beer has an amber yellow color, and a thin head that departs almost immediately. Almost no aroma. The flavor is hard to describe. It's bitter from start to finish, and leaves a horrible aftertaste. Are there even malt and hops in this stuff? I can't finish the whole can. I don't know if it's because I got REALLY sick and hungover on this stuff after a high school party or because it's just plain bad (okay it's just plain bad), but it has a flavor that I just can't seem to get down. If this is the "Master Brew," why do they brew a light version?

There's a reason my friend coined the term "Meister Chow". This is what you drink when you REALLY don't like yourself or the relative health of your colon. My fraternity used to stick by Beast, occasionally venture to Natty and invariably pay homage to the meister sheister. Actually, its not that different than any other cheap beer. It imparts more flavor, I think, than the other beers with an interesting rancid fruit taste and tanginess almost as if it has a touch of fortified wine in it. I might just be crazy. Pools of this stuff used to coagulate on the floor, and mosquitoes wouldn't even think about laying their brood in it. It's cheap, its somewhat elusive (I assure you it is available in the Lehigh Valley part of PA if you want to waste your time looking for it) and it contains alcohol. College kids and other assorted po'folk think that's a good selling point. And I suppose it is. Enjoy! and then enjoy again the next day via multiple routes of escape.

hungryghost from District of Columbia

Yep, its been while since I downed a container of this swill.
It may have taken a few times but I learned my lesson. Hangover in a can, guaranteed!
It is an artificial yellow color, with a weak and short lived foam.
Smell and taste are the same if that makes sense. Like the inside of a cheap aluminum can, subtle, stale rice notes.

Pours a clean/clear pale yellow color, some carbonation, with a one-finger white head, with some minimal sticky lacing. The nose is grainy/ricy at best. The taste is slightly sweet, grainy, and ricy. Light Body, not much going on here. What a waste of water.

Again, taking a trip back to high school. $1.99 a 12-pack. I should have know better. Funny, it still costs the same today. Open it up, and ouch, B.O. veggie and metal aroma blends to form vomit. Pours clear gold with a sad, bubbly white head. Tasting... and confirmed ass. Tart, sour, metallic, veggie-and-sugar concoction. I am an idiot.

Poured the palest and clearest yellow imaginable, big fizzy white head faded immediatly to leave just really nothing. Lots of chains of bubbles littered throughout, but this was just soo damn clear. Smell did not exist, at least I couldn't smell one, don't know if that is good or bad in this case, so thats really all I can comment on. Taste again was non existent, maybe a slight taste of corn or grain, but really I was dumbfounded as there was really no taste. Was slick, smooth going down. Tasted like ice cold water and I could see why people drink so much, they are trying to find the taste!

Pours a clear yellow color. Smell has grain and corn starch. Taste was very watery with slight bitterness a sweet cereal finish. Moth feel this with metallic slight bitterness. I like AAL but not this one