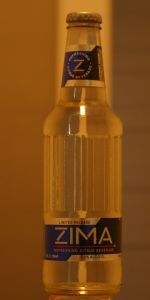 Notes:
View: Beers
Reviews: 18 | Ratings: 65 | Log in to view all ratings and sort
Reviews by BeerWithMike:

Tried this back in 1992 and it was horrible.. Now in 2017, the same result. Same clear bottle and lable but says "Limited Release". LOL! For you Millennials, you might love it! (wink)

OMFG! Zima has made a return! I was a young sailor aboard a pier-bound ship in the early-to-mid 1980s & once liberty call went down, we would eat chow & head to a local park to toss Frisbees, footballs, baseballs & each other around. On the way there, we would load up on cases of Michelob & a bottle (or two) of Jacquin's Blackberry Brandy (BBB). One evening, Voss-man suggests that we try Zima as something different. It was okay & it led to trying Bartles & Jaymes coolers, also, but nothing really replaced the ol' tried & true.

From the bottle: "Refreshing Citrus Beverage".

I hear the refrain from The Talking Heads' "Once In a Lifetime": same as it ever was. Same screwed-up, screw-off cap that screws me up tight every time. An aggro pour to vent my anger & frustration did nothing to help. It created a fizzy, foamy finger of bone-white head that quickly dissipated into wisps. Color was crystal clear (SRM = N/A). Peering into it, I was transported back to my stint at "A" school in Meridian, MS towards the end of 1985. I saw all of my old classmates, some of whom I had dalliances with, as we hung out in the base EM Club. Nose had a lemon-lime quality, very evocative of Sprite or 7-Up. Mouthfeel was thin and watery. The taste was a little more tangy than simply lemon-lime, making it more refreshing than drinking pop, but not by a large margin. I could see why we went to something like this at that point in time. It definitely breaks up the monotony, but to what end? I just purchased some Henry's Hard Seltzer today & had such a thing been available back then, we might have gone to that, instead. Finish was semi-dry, slightly tart & refreshing, but it just was not sustaining.

A timeless rerelease of a fairly bland citrus alcohol beverage. I found the alcohol content high enough to be helpful, but the taste rather like some kind of flat Sprite. Frankly, I’d rather order emphysema. That’s from “The Simpsons.” 2018/05/22

1.61/5: It's like a bad Sierra Mist with alcohol in it; lived up to expectations completely

12oz bottle at my a bottle share as a gag. It's crystal clear and highly carbonated. Tastes and smells like alcoholic Sprite. The most interesting aspect was that several women refused to sample because it brought back bad memories of drinking during their youth.

Look: Crystal clear and no head, like a lemon-lime soft drink.

Smell: Citrus with a very faint hint of malt somewhere in the background.

Taste: Same as the nose. Very mild citrus flavor, not too different from Fresca, with the tiniest hint of malt liquor somewhere.

Overall: This isn't really a beer. It's more like a soft drink to help teenagers get drunk.

This beverage pours clear and bubbly. It looks like 7UP. It has no head with no lacing.

It has a sweet citrus aroma.

The taste is candy sweet with artificially sweetened citrus flavors.

It has the consistency of pop.

It was good for a reminisce.

Beautiful crystal clear color with a fizzy white head on top that vanishes quickly. The smell has a sweet citrusy aroma to it reminiscent of 7-Up or Sprite. The taste has a very refreshing citrus flavor to it with a crisp sweet finish. The feel is more on the dry side with an acidic heat in the late finish. Overall, Zima is super nostalgic for me. It reminds me of being in middle school spending nights at a friends house and he would share some of his parents stash with me while we played ECW Wrestling on PS1 and chatted with girls on AIM all night till the sun came up. I wasn't aware at the time but if you get bored with the straight citrus flavor you can drop some Jolly Ranchers up in this and it's like a whole new experience all over again. Welcome back Zima!