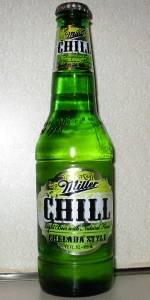 Notes: A Chelada-style light lager beeer with a hint of lime and salt added.
View: Beers
Reviews: 345 | Ratings: 765 | Log in to view all ratings and sort
Reviews by tbone1384:

Comes in a green bottle ripe for skunking. Can't comment much on the appearance -- didn't bother to pour (would have seemed weird to ask for a glass in that particular establishment, especially for Miller Chill). Sampled it just for the hell of it out of basic curiosity and out of lack of interest in the rest of the BMC canon at this particular place. It DID seem to be very pale, however, since I saw no variation in shading through the bottle above and below the beer line.

The aroma was a repugnant acridity with a hint of fruitiness. I'm not trying to be cliched here, but it seriously smelled like vomit after a night of margaritas. No joke.

The taste was "lymon" with an undercurrent of cereal grains. Kind of like I imagine it would taste if you accidentally poured Sprite instead of milk on a bowl of Crispix (or just mixed Sprite with an Old Milwaukee Light). Not really very beerlike to tell the truth.

Fizzy, seltzery mouthfeel -- about what you'd expect in a macro lager.

Not at all drinkable -- just a weird mix of tastes and a bad smell.

Appearance- A transparent yellow with a tiny head and a little lace.

Smell- A very overwhelming fake lime odor as soon as the bottle opened.

Taste- I know I should not attack a beer but this one was gross. Nauseating lime taste very much over flavored. It was kind of like green gelatin that never set and someone threw some beer in it. An obvious adjunct corn like aftertaste followed.

Mouthfeel- A little syrupy maybe. I can not but my finger on it.

Drinkability- I am drinking this beer never again.

Got a free sample of this at my local beer bistro.

Smell: A muddled citrus aroma dominated by a soda-pop sweetness. No malt or hop character whatsoever.

Taste: My first impression is that this barely resembles beer. Sickly sweet with an ambiguous lime flavor that's mostly reminiscent of an old can of Sprite.

Notes: Beers like this piss me off because not only does it try to completely disguise any actual beer-like flavors, but the fruit flavor used to cover any would-be beer flavor is nasty and artificial.

This was not a pleasant experience. I think that Miller tried to hard and put in little effort to change the Miller style into a beer that is far below quality and what I believe they could be capable of. It looks like a light beer but taste worse. Almost like sun warmed water that was later chilled and then a warm lime added. I actually like the concept of this beer, but nothing after that. "Plain ol Jane" gold in color with a beige-ish 1 finger head. A boring mouth feel with a lingering after taste. Just all in all a poor quality product

I am prefacing this with the fact that this is not a wonderful, complex beer. BUT, it is a good beer for the masses. I had one at a picnic this evening and succumbed to my curiosity. The color is typical macro lager, the smell is sweet and limey. The taste...well it kind of tastes like a lime Zima. It's very light and limey and very carbonated. I thought that it tasted almost nearly unlike beer BUT I don't really think lambics taste much like beer either. So it is what it is. It ain't purty and it ain't complex and it ain't smart, but it's the kind of cute girl at the bar that's fun to hang out with.

Pours a light golden color with a puny little white head with no body. The smell is probably the worst thing about this. It smelt like a wet mop.(seriously, you know how an old mop or dish rag smells like? that's it!) Taste is god awful too carbonated, and the lime is really weak tasting. About as bad as a corona with lime, or at least comparable. Not much for mouth feel, besides the bubbly annoyance of carbonation. I won't mention drinkability because it's not worth it. Not impressed at all.

Not sure why I ordered this tonight, probably because I had been bombarded like everyone else with the adds for it and had to at least give it a try. I figured it to be in the same vane as the Tequiza of the world, and I ended up being not that far off, however it does get points for the bottle which did look pretty cool, anyway...

A - Pale golden yellow, with a big fizzy white head that dropped down to nothing. Lots of carbonation, and no lace.

S - Overwhelmed by the smell of lime in this one. It almost smelled like a weak margarita which is where I think they were trying to go with this. No real detectable smell of the beer..

T - Wow, it is totally a margarita rip off. Lots of lime and salt like flavors. Some small hint of a grainy macro lager that had an entire lime squeezed into it, with maybe a touch of some kind of hybrid non alcoholic taquilla. Not impressed.'

Overall this was a decent novelty beer and went well with the chips at the bar but I would not bring home a six pack of this, nor buy another bottle anytime soon. give it a try if its around just for giggles.

Hmmm....doesn't start off with any sort of interesting characteristic. The body is practically clear, it kind of looks like putting a couple of yellow Skittles into a cup of water, when the color starts to dissolve... I don't know, that's the best way to describe it, yellowish in places, but literally clear at the bottom. Short, white head falls into a thin ring around the top of the glass. No body to the head at all. Severely disappointing.

The smell is pleasant, but not very deep. There is a lime scent for sure with sort of a sweet overtone, not much else. Smells like beer.

Well, the taste is certainly interesting to say the least. It tastes like lime soda. There is absolutely nothing in the taste that tells me this is beer. I can taste some salt too. Entirely sweet, are there no hops or what?

Light bodied, but highly carbonated. It's like drinking soda. I can see this being highly drinkable, but I will never get another one for myself. It's not bad, it's just lackluster. Nothing about it draws me in.

S- Citrus. Lime, but artificial. Like cleaner. Strong lime overpowers all other smells.