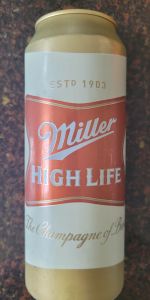 Notes: Miller High Life, also known as the Champagne of Beers, is a quintessentially classic, American-style lager. In 1903, Frederick Miller created Miller High Life because he believed that the good life, the High Life, should be accessible to everyone, not just the upper crust. To this day, Miller High Life continues to be faithfully brewed as a golden pilsner, utilizing light-stable galena hops from the Pacific Northwest and a select combination of malted barley.
View: More Beers
Recent ratings and reviews. | Log in to view more ratings + sorting options.
Ratings by wesbrownyeah:

Reviewed by wesbrownyeah from Florida

A- Pours a crisp and clear light golden fluid with massive tight and loosly packed bubbly head. One inch head falls to half inch and stays around thicker around walls of glass... decent lacing.

T-M- Similer to smell corn husk, sharp grainy bite with a little bitterness that almost comes off as a metal flavor. Mouthfeel is not that pleasing with tangy astringentcy and dry finish.

D- Miller drinkablity and gets the job done on the most basic level. Beer...GOOD

Reviewed by charleskimmle from Canada (BC)

1.82/5  rDev -33.1%
look: 2.25 | smell: 2 | taste: 1.75 | feel: 1.5 | overall: 1.75
Canadian canned version. Lots of small bubbles, a head that is solid almost like a stouts head, and extremely webbed glittering lacing from the head down the glass. It's good they clearly label that this has no preservatives or additives, because one might suspect additives in this due to the appearance, texture, and taste. Taste is crappy kind of sweet corny with some weird almost like perfume notes. Horrible warm, somehow the low % alcohol manages to come through, and the gross sweetness is more apparent.
Nov 16, 2022

Rated by bluestringer from Georgia

3.17/5  rDev +16.5%
look: 3.5 | smell: 2.75 | taste: 3.25 | feel: 3.5 | overall: 3.25
12oz can poured into a nucleated Pilsner glass.
Appearance is pale clear yellow with 3 fingers of white head. Retention is below average leaving light lacing and a thin cap.
Strength of aroma is medium-low. It smells like unsalted tortilla chips, something that smells faintly of rancid corn oil and a hint of yeast.
Strength of taste is somewhat below medium. It tastes like corn, it's sweet and it has a very light herbal hop bitter finish.
Thickness is closer to medium-high than medium. It's creamy. Carbonation is high and astringency is low. It's too thick and has too much carbonation for the style but I like the feel.
Overall, it's in the middle of okay. The sweetness is the biggest drawback with the faint old corn oil smell coming in second. I thought I would give this beer a much lower rating. For the price, I prefer Lone Star because it's less sweet.

Reviewed by mfnmbvp from Illinois

Poured to a Brasserie D'achouffe tulip, for science.

A - The same crystal clear yellow fizz that appears through the clear glass bottle. Twist off cap. Pours clear enough where I can see my thumbprint on the other side of the glass. White frothy bubbles for a head actually do hang out for a little while, leaving some ok lacing. Appears aptly carbonated. Doesn't look horrible, to it's credit.

T - Very plain. Extremely grainy & husky, with flavors of corn on the finish.

M - Huge lingering flavors of corn on the finish. Body is smooth, light, and easy to drink aside from that, I am just not enjoying the flavor on the finish.

Overall, probably best consumed straight from the bottle after you have already achieved a high buzz. Sad to see that Miller High Life Light was discontinued, as I would have loved to tick that one off as well.

Reviewed by Bluehamms from Pennsylvania

Reviewed by Kevinski from Ohio

2.39/5  rDev -12.1%
look: 3.5 | smell: 2.5 | taste: 2 | feel: 2.25 | overall: 2.75
Every six months I purchase a 40 oz. bottle of this beer hoping that maybe my taste buds were having a "bad day" the last time I drank it. I really want to like the High Life but just can't get past the greasy vegetable oil aftertaste finish this beer gives. Maybe its the Galena hops that they use. I tried to find other beers that use these hops but have had no such luck. Molson Coors has retired very drinkable & palate pleasing lagers such as Extra Gold & even Milwaukee's Best Premium. Hamm's and Banquet are the two most enjoyable AAL's that this brewery brews. Not being a "hater" I will buy and drink a 40 of MLH in hopes I will see and taste
something different.
Aug 22, 2022
Rated: 2.76 by Vapory

As with all Miller beers, this one looks gorgeous in the glass. It's a crystal clear yellow with a bright white head and bubbles racing up the middle of the glass. It leaves nice lacing on the way down. This is how my old man's beers looked when I was growing up in the 80s. But as with my old man's beers, once you go from eye to mouth, things start going downhill.

On the nose, there's a corny sweetness. It's not appealing in an age of tropical fruit bombs or rich, roasty stouts. There's no hop presence and in fact very little aroma at all. This won't scare off the beer's intended audience, though.

Taste is a letdown even after the nose. There's a minerally, soda water vibe going on. There's some sweet malt, but it's like the beer is produced with postmix and even then the beer syrup in the packet is on its last legs. There is utterly no hop body. The beer has some bitterness, so there are clearly hops in the beer, but maybe they were only waved in the general direction of the boil, rather than actually inserted.

Feel is ok. The carbonation comes through more strongly than I would have expected and it definitely overshadows what taste there is, so the sensation on the swallow again brings to mind carbonated postmix. I've seen a few reviews that point to the beer's excellent softness and generous mouthfeel, but I just don't get it.

I specifically requested some American macros in the trade/proxy that this beer came in, and I'm glad I did, and I will again. Even living in Australia I'm aware of the iconic nature of this beer and its tagline. I'm also aware that it no longer lives up to what a craft beer drinker wants in a beer, but then nor is it meant to. There's an audience for this beer, and it's not a craft beer drinker, but it is a craft beer collector who wants to experience the full gamut of the world's beers, and I'm very much in that camp. It's near impossible to get it through normal channels and I'm glad I went to the effort to get this one. I've loved receiving, pouring and drinking this beer, even though as far as beer goes, it's pretty ordinary. It'll get marked up a little in the overall mark because ultimately it's my overall experience I'm rating here, and in those terms it didn't disappoint at all.

Reviewed by Caldwan123 from Iowa

On the pour not a lot of head forms because there is so little liquid and I was a bit too gentle. Over a couple minute the head actually grows from the streams of carbonation rocking up the sides of the glass. Body is a light golden color just a touch darker than straw, leaves light lacing. Good looking beer.

Aroma is grainy with some skunked hops present. This is likely less present in the canned version, but the clear bottles will definitely be skunky. The skunk isn't overwhelming but present and verging on bad. The maltiness of this beer isn't completely covered however. Some corny vibes but it doesn't smell watered down.

Flavor follows the aroma and loses a bit of the skunk amd trades it for a sweet grainy crisp flavor. Some cheapness does come through but miller makes some pretty good cheap beer. The flavor profile is pretty soft and bready with some very very light notes of the hops on the very back end, however they do still provide some bitterness.

Feel is where miller shines the brightest. On the sip isn't feels big while still being refreshing and not too heavy in the stomach. Big carbonation on this one, but it's fine carbonation giving this one decent body.

Overall I think miller makes one of the best American mass market lagers out there, and so far they haven't let me down. Sweet without being too syrupy and bringing the malt flavor that not hoppy beer should have. Refreshing and not too many off flavors like some AALs.

Rated by KuhnDawg from North Carolina

Reviewed by JimboMontana from Montana

2.75/5  rDev +1.1%
look: 2.75 | smell: 2.75 | taste: 2.75 | feel: 2.75 | overall: 2.75
Most all domestic beer seems to be a disappointment nowadays..Most beer drinkers think that it used to be of much better quality. Miller High Life was at one time regarded as a quality beer then became a cheap trash beer of the 80ies and 90ies. Few years back they improved it with newer type shelf stable yeasts and the quality has actually came back and it's not too bad compared to the other domestic beers out there. With that said I still miss the quality that all domestic U S beer used to have and now lacks.The big breweries think beer drinkers are uneducated slobs and will drink anything because they can't tell the difference.
May 18, 2022
Rated: 3.54 by soarinsteven from Illinois