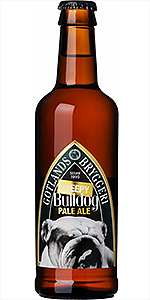 Not the most appealing to look at or smell, but it tastes pretty decent. Nothing that blew me away but its refreshing and fruity, mainly grapefruit on the palette with a hint of maltiness and piney bitterness. Pairs well with food.

I recently drank Sleepy Bulldog Pale Ale from Gotlands Bryggeri in a restaurant in the Old City Stockholm. I thought it was a pretty decent beer.

Taste: The flavor is fruity but not sweet, black currants, grapefruit, and a mild piney bitterness at the end.

Smell is herbal with notes of pepper, minerals, onion and some floral hops.

Taste is a bit oniony with herbal notes and some sweet malt balancing the mild bitterness.

Overall, a pretty good pale ale, nothing fantastic but drinkable.

I had this on tap in Gothenburg, Sweden, and definitely feel it was better than its ratings. Recommended.

Had this beer on draft at Bjork Bar (in the Marriott) in Stockholm. I wasnt expecting much, but I ordered a pint because there were only two beers on draft that day.

A - Amber-brown body and light tan head. Light lacing throughout.

M - Perfect carbonation from tap. Refreshing after a long, cold day of sightseeing.

O - I thought this was a pretty well-balanced pale ale, not too malty and not too much sharp hoppy notes. I thought I was just going to order just one, but ended up ordering about 4 pints before going to bed. Its not something I would seek out in bottle/trade, but I would definitely get if I see it on draft again somewhere.

A little boring and stale pale ale without having any excessively exciting flavors or aromas. It isn't nearly as tangy as some other beers in the same style but at the same time 4,8 is quite low ABV.

The taste is however pretty good for being such a easy beer to drink. Drunk on tap.

One of my favorites. In it's understated simplicity a fantastic beer. Neat, sorted and with a crystal clear taste profile. Loads of citrus, especially grapefruit. Clear, amber like liquid. Only 4,8% of alcohol. All and all a great summer and session beer.

Served on draught at Engelens in Stockholm.

Appearance is amber with a finger of a light tan head, one large finger tall, that soon leaves some lacing. The nose on this pale ale is nutty, citrus fruits, some grass. Its taste come through with malts, hops, apple and other fruit. Mouthfeel is medium, carbonation is present, a dry finish to it. All in all, a respectable pale ale, but nothing worth going out of your way for.

Pours nice. Clear amber brown with an eggshell colored head. Nose is sweet but seems a bit thin, kind of like the feel. Flavor is nice. Brings enough body to keep it interesting. Nice lasting aftertaste. Though as time goes on, too much of a metallic/dirty tone shows. Okay enough, I guess.

The colour is brass; the finger thick head is white. Some lacing occurs.

The smell is light. Some grapefruit notes and a metallic bitterness.

The taste is somewhat sweet with very mild notes of grapefruit and American-style hops. The short aftertaste got some sour hints, anonymous hops and a toch of cookie dough.

The carbonation is fresh, the liquid is light.

Sleepy Bulldog Pale Ale from Gotlands Bryggeri
Beer rating: 81 out of 100 with 39 ratings