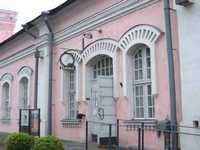 3.14/5  rDev -16.3%
vibe: 3.75 | quality: 3 | service: 3.25 | selection: 3 | food: 3
This vaulted brewpub is situated in a listed building (once an arsenal) at the former Swedish (later Russian and Finnish) military island stronghold Sveaborg (since 1918 Suomenlinna) near Helsinki - now a UNESCO world heritage site, historically very interesting. I liked their Coyet Ale very much, the porter was somewhat less appealing to me but still drinkable. Their pilsener was the third beer on, but I did not have it. Unremarkable food. Worth a visit.
Jun 03, 2021

Reviewed by sinkas from Australia

3.65/5  rDev -2.7%
vibe: 3 | quality: 4 | service: 4 | selection: 3 | food: 4
missed the ferry ,
so thought would give the restaurant a go,
didn't realise it was a brewery,
Food was probably the best we had in Finland,
and they were very helpful with young kids.
Beers were tasty I had,
Baltic porter,
Winter ale and possibly English IPA,
all above average quality
great way to finish up a day of walking around the island

Reviewed by johndawsonaustin from England

3.8/5  rDev +1.3%
vibe: 3.5 | quality: 4 | service: 3.5 | selection: 4
Get the ferry from the Market Place in Helsinki to the fortress island of Suomenlinna Sveaborg and about 15 minutes later you will find this unassuming building in front of you as you disembark. This holds a quite remarkable brewery and cafe.

Walking in to the place you would think you were just visiting a normal cafe, but a close look at the taps hints at something more interesting.

The Island is steeped in the history of the battles between Russians, Finns, and Swedes, which you can find out about by taking one of the guided walks from the Tourist Information centre which is about 400m away, down the other side of the island. The Brewery was built by the soldiers who offered to work overtime for free in order to get it built. They knew a cold winter was coming and a nice beer would make life all the more bareable. And Beer is still brewed on the premises now, albeit in a rather more modern plant which is visible in one of the back rooms.

Their taps advertised four beers - a bitter, a best bitter, a pils, and a Porter. The best bitter was not available, so I tried the bitter, which was quite palatable, and a fair representation of it's style, and the Porter, which was really quite delicious. But then, I'm a sucker for this type of beer.

The beer was quite pricey - at 5.90EUR for 0.4 of a litre, I found it hitting my pocket rather hard, but it's not so far from the mark for Helsinki.

Cider was also available, and seems to be quite commonly available in Helsinki.

Food was a available as a help-yourself buffet for 17.50EUR. It looked ok, but we felt that we didn't want to fork out that much and so didn't try it.

Definately worth the ferry trip.

Reviewed by scottum from Vermont

4.43/5  rDev +18.1%
vibe: 5 | quality: 4.5 | service: 4.5 | selection: 4
Wow! I did not expect to find a brewery on the island of Suomenlinna off the coast of Finland. Suomenlinna are the islands holding the sea fortress which guards Helsinki. This is a nice place. Signs guided us here from our boat's dock. The main room is long and high. Out the window is a beautiful view of Helsinki. Every table has lit candles and fresh roses. They have three of their own brews on tap: a porter, a pils, and an ale. They also have Up Cider on tap, both the regular and the dry. There were some sandwichs available for lunch, but they didn't look to good. Since the islands are a must visit when touring Helsinki anyway, any BA will certainly want to stop here.
Dec 11, 2004
Suomenlinnan Panimo Sveaborgs Bryggeri in Helsinki, Finland
Brewery rating: 3.19 out of 5 with 35 ratings