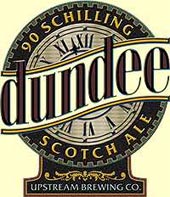 Notes: Our Dundee Scotch Ale begins with a traditional sweetness and finishes with a full, malty flavor. Don’t be fooled by the dark color—this beer is delicious and surprisingly easy to drink.
View: Beers | Place Reviews
Reviews: 13 | Ratings: 50 | Log in to view all ratings and sort
Reviews by TheLongBeachBum:

Presentation: Sampled during a visit to the Upstream Brewing Company, Omaha on 23rd September 2003. Served on draft, in a pint Glass.

Nose: Malts, malts and a more malts. Pretty one dimensional, not even a feint whiff of alcohol breaks the monotony of the Malts sadly.

Taste: Rich, toasted biscuit malts in a light caramel malt middle with a building sweetness. The ending is smooth, rich, sweet and very filling. A melted brown sugary feel on the tongue adds a warm Scotch malty feel in the back end of the Ale.

Mouthfeel: Smooth and malty, with a thick rich, but never cloying body. The alcohol, even at only 6.5% manages to muster up a very mild warming effect. But it lacks balls and a real warming alcohol mouthfeel to ever be a 90/-.

Drinkability: We planned to leave, but I quickly sneaked this Seventh Pint in. The last of the night, and even after 6 other beers and a large meal, it was a pleasure to finish with this mildly warming beer, rich malty beer. The alcohol is not that prevalent or dominating at all, as I first expected, but no way could I manage any more than one of these.

Overall: I had the great fortune to drink both Maclays 90/- and Broughton 90/- from the cask at Winter Beer Festivals in the UK many years ago. Both were 8%+, thick, alcoholic and heavy. It could be argued that the Alcohol by Volume of 6.5% is way too low for a 90/- Ale, and that this is probably more akin to a malty 80/- Scotch Ale. I imagine that if this were beefed up to about 8%, that it would be very good, but maybe way too Heavy for some. There again, 90/- was sometimes called Wee Heavy, so maybe that wouldnt be a bad thing.

That said, the beer is OK, above average, and a great Night Cap beer.

Served dark brown with an off-white, creamy head (almost nitro-like); the head had some retention and spotty lace. The flavors were mostly malty, yet spicy/bitter hops were noticeable. It is very well balanced, soft and chewy, and for a malty brew the hops make their presences felt. Tasty. Finishes dry. The nose is like a malty dry cracker. This a drinkable beer indeed I would recommend it.

Mahogany in color with a nice creamy off-white head. Solid malt aroma and flavor with a definite smoky character that was not present in the CO2 version. Nicely balanced and not really sweet in any way. Medium-full bodied and creamy smooth.

This was pure heaven compared to the CO2 version ... I had to ask a few times if it was really the same exact beer.

Dark copper to light mahogany color with a light brown head. Aroma is so low that I can't really discern any smells. Flavor is sweet malt with no real hop presence. Thin lacing dots the inside of the glass. Slightly above average flavor, but pretty drinkable.

It came to the table a dusky ruby with a lot of malt in the nose, with a tinge of hops lying in the background.

A sweet taste but a little watery.

No head, but not bad collar around the glass

A decent beer. Definatly one of the better ones on the line up. Give it a try.

It poured a thick deep brown with no head to see. Slight fizzing at the top but nothing stuck around leaving an almost oily finish.
Roasted almonds and slight coffee smell is present.
At first attempt the malt comes on thick and never lets go, smooth coffee and burnt nuts finish the drink. I swear I taste grapes at the last few seconds before its gone.
The Mouthfeel is as expected in this style; thick and chewy. As with all the other beers at Upstream its velvety smooth and coats the mouth in happiness.
This was a great scotch ale and I cant wait to have another the next time Im in town.

Draught: An interesting beer. It pours a dark copper color, that was a touch hazy. There was a light tan head that was fairly fluffy. It dissapated rather quickly. The aroma was fairly non-existent. If I sniffed way too hard I may have gotten a hint of peat with some maltiness. The taste was malty sweet, almost too sweet. There was almost nothing else discernable. There was no hops to this at all. It is good, but not complete. Re-rate: This was much better at a visit a few years later. It is more brown in color. The aroma is more pronounced with a slightly roasty sweet malt aroma. Nicely balanced malt sweet taste with some bitterness. Notes of roastiness and smokiness. Good.

I ended up taking a growler of this home from the brewery after savouring the cask-conditioned variety. This brew held it's own with or without cask conditioning.

Poured from a brown glass growler into a pint glass to a dark caramel color with a healthy head. The beer didn't lace quite as well as the cask, but it was served colder than the cask and after about 20 hrs. from the date of filling. It is still a sight to behold in terms of cascading head.

The smell is of rich caramel, slightly roasty, with a bit of an alcohol sharpness. Smells like it tastes. Very well mixed between sweet and bitter flavors. The body is medium, but has a kick to it from the ethanol. This is a very drinkable brew. I highly recommend the Upstream if you're ever in Omaha.

Sampled on location. The Dundee 90 Scottish Ale pours a rich dark amber color with some haze and limited visibility. Seems slightly darker then normal Scottish ales. The head retention, dressed in a slightly off white color, was decent but didnt stick around for the end. The lace was very limited from the beginning.

There wasnt much of a smell. Limited malt and roasted characteristics. Also I caught was walnut aroma, but very light.

The taste was much better. A stronger good base malt and smooth in texture. The overall taste of more English traditional malts with a roasted backings. Add a touch of breadiness as well. Some nut flavors are slight in the background. There also is a nice smokiness that really rounds out the beer. The hops are light but support the malt and have a more earthiness feeling to them.

The beer seems more per a English Ale then Scottish, but the good smokiness and slight breadiness I have to think more Scotland then GB. Overall a good beer with mid to full body. A good smooth taste and would recommend.

On tap. Poured a dark, black color with a very small, white head of foam. It smelled of roasted malt, toffee and earthiness. Nice smokey flavor with toffee, roasted malt and hints of peat.

A- Small silky head with good retenetion and nice lacing. The beer is a dark red brown in color.

M- Medium bodied with a light oiliness to it, also a crisp finish.

This is a pretty good Scotch ale, nice malty flavors and good balance.