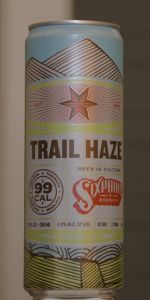 How about an IPA that won’t slow you down? We packed tons of hop character into this super juicy, crazy aromatic little hazy IPA, and dried out the body to make it easy to throw back on the go. If you want hype worthy haze you can take hiking, bring this one to the trails.

Pours extremely pale whitish straw. Very cloudy- opaque. Rocky head with nice lacing. Smell is bright citrus hops. Lemons. Watery. Mild citrus and herbal hop flavor. A little pleasant bitterness. You can drink this like water. It's basically a light beer, it's advertised as being 99 calories, and for a light beer it's great. As an NEIPA it's not's so great because it's so light. So it depends on what you're thinking of this as. It's going to be too light and watery for beer geeks but if you told me this was the future of light beer I'd be happy with that.

For a low ABV IPA this is a solid choice for doing something outside on a hot summer day. There’s lemon zest, orange peel, mild grapefruit, faint peppery spices, caramel, lime, biscuit and malty notes, but it comes off more like a pale ale than an IPA.

This is a light, session IPA regardless of what 6point or its customers call it.
a) Pours pale grapefruit turbid body with scant head and lace.
s) But you do notice the powerful grapefruit and floral aromas as you fill.
t) Taste follows, but is more lemonade, limeade too.
f) Thinnish, but cleansing, refreshing as promised. A bit like a spritzer or soda.
o) Suitable afternoon, first beer after sweating, and reminds me a little of CYTOMAX.

Spoiler: This one was a huge flop for me. And I mean huge. One of the worst beers(not the worst ever, that'd be Sam Adams Octoberfest, undrinkable rotten trash note). I don't know why it should be this hard to not mess up a session hazy. Sixpoint strikes me as a brewery with two strongly competing values. One value is making good beer. The other value is making as much money as humanly possible, to an aggressive, insane extent. They are after all the craft brewery that decided to switch to the tiny-cans and not adjust price-- something that has made me avoid their beers forever. I need to sort of add this backstory here to give you context on why I think this beer is so bad. I can only imagine they thought, "you know, we'll recycle some used hops, try to squeeze every last penny of utterly flavorless, off-notes from these recycled hops, barely ferment it so it's a 4% session, and bam, we've made money from nothing! We'll call it trail haze, put it in small cans, charge for big cans, cha-ching! We're Sixpoint!"

That's a bit sensational, but that's the *feel* I get from this. I can't imagine them fucking up this bad otherwise. Because I *know* for a fact they can make good beer. Resin is great. Crisp is a stellar Pilsner, which is not a style that tends to succeed when attempted by anything other than the masters of the style. I can only imagine some kind of greed went into making this beer, because that is what it tastes like:

It tastes like you took the scrapings off of the bottom of a supermarket trash bin, with rotting produce, and fermented that, and watered it down to 4%. That's what this tastes like. It is flavorless and revolting, simultaneously. It tastes like fizzy asparagus water with a hint of lemon pith. There's zero sweetness. Zero savoryness. Zero flavor. Zero malt. A hint of sewage and rotten veg and grapefruit pith. That's what this beer is. It is truly an awful beer worth avoiding. I'm sorry to anyone who a) has to drink this, and b) anyone who thinks this is something they would drink again.

355ml can. I don’t read it as an IPA, session or otherwise, but it’s fresh and lemony with a nice haze and a tangy finish that maintains interest. It’s thirst-quenching and light and sometimes that’s exactly what you want from a beer.

Beer poured a white gold with a very nice white head that has some really good hang time.

Nose is nice, fresh tropical and citrus are front and center.

Taste is an ultra light pale malt base that accentuates a very good use of the tropical and citrus hops used to balance this beer out nicely ; 4/10 on my bitterness scale.

Overall a really nice job by the brewing team to maximize the malts and hops with only a 99 calorie cost!

Pours a hazy yellow color. A modest foam head soon dissipates. It yields a thin layer of film and some lacing.

Light bodied with a mostly crisp mouthfeel and a crisp dry finish. Carbonation is moderate to lively.

This was a nice light drinking beer in the session/lo cal IPA style. Easy to drink, good flavor, and a nice option if your in the mood for something lighter.

Pours a very hazy pale yellowish white with about a finger and a half of white head. Decent retention, little bit of lacing.

Smells of pineapple, citrus and a bit of pine.

Taste. This is where it goes off the rails a little bit. Kind of like weak carbonated orange juice off the rails.

Looks ok. Smells ok. I get this is a lo-cal and won't have as much taste/body as the real thing, but man. This was a miss.

Sixpoint says "don't call it a light beer". And when you pour it, you understand why. It pours juicebomb hazy, and smells juicy too, filling the air with citrus. Taste is NEIPA juicy, but thinner, less robust, with a quickly disappearing finish. As the beer warms (drink it cold, and quickly), the flavor almost vanishes. So crack it open, bang it down fast, and get on with your adventure.

Served in a teku glass from the can.

12 oz slim can poured into a tulip pint glass. Pours an ugly turbid greenish-yellow. Not appealing visually. Aroma and flavor feature green citrus and a hint of watered-down wheat. Mouthfeel is thin. Overall not undrinkable, but also not something I'd want to drink again.

A hazy yellow lemonade color and a lot of carbonation. I was struggling to get scent off this, but let it warm and lemon with a hint grapefruit come through. Taste and mouthfeel follow with a lot of fizz, a little lemon, mild hops. Faintly bitter, gassy aftertaste. Good for what it's trying to do (low-cal session beer), but not one to reach for if you want to be overwhelmed.

These lo-cal session IPA’s will never be my jam, but this one’s not bad for what it is.

A: Pours a slime green, grapefruit/lemonade looking color :( One finger of white fizzy head which dies down to nothing almost as fast as it forms. No lacing. Mountain Dew looking.

S: Strong citrus. You can smell the hop bitterness. Some lemon and unrecognizable sweetness.

T/M: Light bodied. Crisp but a little watery. Lemon. Fruity. A little sour. Some hop bitterness. Not much balance. Flavors are weak.

O: Crisp and refreshing. Kind of like a less carbonated flavored hard seltzer. ABV is pretty low at 4%. Session NE IPA? Color is a little off putting.

Canned 5 months ago it's not a young one and that is likely an issue.
Pours light yellow, looks like lemonade. Aroma is onion and some citrus, not terrible but not what I would expect. Taste is mostly bitter with a bit of citrus. Feel matches look, thin and watery. Overall, if you're willing to say "yeah but it's 99 calories" or "yeah but it's 4%" it's okay. Brewed in collaboration with REI, makes sense. Keep it in the can so you don't see it and have after a nice hike, and it would be okay. Otherwise, Sixpoint makes many better options.

Actually a pretty decent lo cal IPA. I'm good with it for what it is.

Pours a pale hazy yellow leaning towards white with an off white head that quickly dissipates.

Sour fruit, musty earthy hops with a hint of cracker.

Taste follows the nose. It is a bit funky and all over the place.

On tap at Marilyn's on Main. Having after a 3 month covid restaurant shut down in Pennsylvania, so not sure how long this keg was sitting around..... If that makes a difference. Right off the top the aroma is delicious, light, sweet, slight coconut, peach and tangerine. Really enjoyed the sniff, unfortunately it goes downhill from there! From the get go it tastes like something is missing. There's a sharp bite and then a drawing of the mouth that turns me off. The flavor is mild lemon and wet dog. Sorry, this one's not happening.

Appreciate the effort to creat a tasty, hop heavy, low calorie and ABV hazie. But this is a swing and a miss. Watery, almost tasteless, plenty of grapefruit, but not much else. If you were making a hazy seltzer, this might be it. Pleasant nose (Ruby red grapefruit) and silkier than I expected, feel-wise. But what you get is kind of what you’d expect for a 99 calorie hazie. Just can’t compete with regular hazies.