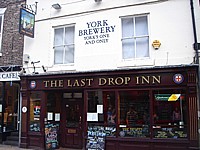 After a few brews at the York Beer Festival; then visits to the Ackhorne and the Three-Legged Mare, we decided to hit up York Brewerys first Tied House, the Last Drop Inn. Situated on Colliergate it is about a half mile from the Railway Station and was only opened in 2000, previously it was a Solicitors Office.

Outside it has a rather traditional feel, the lower floor is fronted with a dark wooden trim and several large windows, whilst the upper floors have a more staid cream painted exterior.

Once inside, the place is actually quite small but retains a pub feel. A single bar runs on two levels and has equal footing for Handpumps and multi-tap chrome fonts that dispense lots of brewery-conditioned offerings of no interest to me usually. It was immediately noticeable to me that there are no fancy flashing electronic distractions in here, the Brewery have a policy of keeping those machines that have those bloody annoying beeps and repetitive tunes OUT of their Pubs and it is one reason why I enjoy being IN them so much. This adds to the atmosphere, the Last Drop Inn benefits from a more Pub like interior which the Three-Legged Mare lacked. Pastel painted walls and lots of wooden fittings also add to the ambience but it does feel a little forced, such that the effort to convert to this to a Pub was a tad over the top in order to convince people that this has always been a Pub  if you know what I mean. The large windows at the front of the Pub offer some terrific views of the streets outside, and although it was late at night when we arrived, I would imagine that these windows make for some awesome talent spotting in the tourist crowds during the Summer months whilst enjoying a Pint in here!

Beers on the Handpump were York Stonewall Bitter, Yorkshire Terrier, Centurions Ghost Ale and a seasonal, I think it was the Progress which I had tasted earlier in the York Brewery Bar with BSF and LondonPorter. The 2005 CAMRA Good Beer Guide states that it also sells Guest Beers, but I never saw any, all the brews were from York Brewery during my visit. Of the other offerings, Bitburger Pils and Hoegaarden seemed the only palatable ones, they also had Guinness served at seemingly cryogenic temperatures  what is it with this craze of drinking almost freezing brews in England since I left? Guess Im getting old.

Service was great, and the barmaid was incredibly lovely. Has an outside drinking area which I never saw and the Last Drop Inn serves food until 4pm, the Menu looked good, but it was way too late for our party to have anything other than Bar Snacks, but the Salt & Vinegar Crisps were good.

A real back to basics boozer that has a terrific location, being situated slap bang right in the middle of the shopping & tourist heartland nearby to Kings Square, which itself can get very busy in the Summer months and weekends. This all makes for a lovely quiet haven and a great place to enjoy a few York brews far from the madding crowds.

Recommended when doing the tourist thing in York.

The Last Drop Inn is the outlet for the York Brewing Co. located near the traffic restricted pedestrian zone of York. There are 5 York beers on tap as well as about 10 guests, some on cask. One enters into a square room dining area and walks through to several stairs to an upper level where the bar and a few more seats are located. As with many English pubs there are no seats at the bar, but room for perhaps 8 to stand with drink in hand. Smokers can go out a back door near the kitchen to a tiny area that has a picnic table and a few seats. The bartender wore a York Brewing shirt and was quite enthusiastic about the York beers, telling me in great detail about each one. He encouraged me to visit the actual brewery, less than a mile away, but I pointed out that as a tourist I was time restricted. Maybe next time.

This place is right in the middle of the tourist district of York, near the shambles, which is how I found it. We were spending the afternoon seeing the sights of York and when I decided that I needed a beer, this was the first pub that we stumbled into. I thought that I might be on the right track when I saw the CAMRA sticker by the door and boy was I!

They had a significant selection of real ales on beer engines (six-plus taps) and they even offered a sampler of three 1/3 pints from any of the real ales.

The beer was fresh and served at the appropriate temperature. The bartender was more than willing to talk beer with the patrons, which included both locals and tourists. The locals were quite friendly as well and were more than happy to give advice on both beer and what sights to see while we were in the UK.

Overall, I was really pleased with this place. The beer was local and quite good and the atmosphere was friendly and lively. This is the sort of place that you really must experience while in England and I will make a point of going back there if I am ever in the region again.

The "shop frontage" looks more like a cafe or coffee shop, but inside its pub! Bare floor boards with seating area in the windows, then a raised section at the rear with the bar and hand pulls, and further seating.

At the time of visit they had 5 York Brewery beers on - Guzzler, Pure Gold, Terrier, Stonewall and Centurian Ghost, plus lagers and cider on tap. The two beer's we tried were excellent and the service was good, and the bar staff knowledgeable and enthusiastic about the beers they had (as in The Yorkshire Terrier on Stonegate) The atmosphere was good, though a mixed crowd at the lunchtime we went, with many having food - which looked good, though did not try ourselves.

Another little gem in York, though can be very busy with tourists being in a popular part of the town, but definately worth a visit for the great York beers and pleasant relaxed atmosphere.