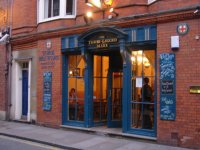 After a super lunchtime session at the York CAMRA Beer Festival, and a few beers in the legendary Ackhorne, it was time for our mixed party to seek out some York Brewery Pubs.

The Three-Legged Mare is located on High Petergate and as such is very close to the Minster. Named after a device (Mare) once located in the nearby Knavesmire which was used to hang three criminals at a time; a replica of which can be found in the Beer Garden. Converted from a Shop in 2001, the bare brick exterior lacks a Pub feel and even though it has a traditional swinging Pub sign, it does tend to look more like a trendy Café with its dark blue painted windows and entrance.

Once inside the interior betrays its youth and hides behind its rather modern refurbishment and pastel painted walls. The Bar lies to your right and has a good selection of York beers. York Stonewall, York Bitter, Yorkshire Terrier and Centurions Ghost Ale are regulars, as are York Seasonal brews; on my visit they had the excellent single varietal offering, York Hallertau, as well. Sometimes offers a Guest beer though there wasnt one available whilst I was here. In addition to the Cask Ales there are many large chrome taps dispensing Guinness at seemingly every known temperature known to man, as well as several trendy Lagers, Ciders and even Hoegaarden. Several bottled beers are on offer in the Cooler behind the Bar, I noted several Liefmans bottles, some high end Euro Lagers and lots of sweet fruity Timmermans for the girlies.

The flirtatious Service made an old Man very happy and raised a few smiles. The Three-Legged Mare is quite a small affair, basically a single bar free of Juke Boxes and Fruit Machines. A small Conservatory sits at the rear as does a rather tidy Beer Garden. Still, its a pleasant enough place to enjoy the York beers in somewhat modern surroundings whilst chilling out and avoiding the tourist hoards. Take care when heading downstairs for the pissers though, the tight spiral staircase can become a major hazard after a lunchtime spent at the York Beer Festival.

The Three-Legged Mare is the second York Brewery Pub which opened in 2001. Overall it has a rather modern feel throughout but it is a good place to grab a brew or two before, and/or after, touring the highly impressive York Minster.

The three-legged mare (aka the Wonky Donkey) was the second York Brewery pub to open, after the Last Drop Inn. Inside is a bit weird, the front area up to just past the bar is in normal wood and brass styling, then there's a conservatory style section which is much lighter, which leads out to the tiny beer garden (a recurring feature of York Brewery pubs). At the bar, stalwarts Guzzler, Terrier and Centurion's Ghost have been joined by Blonde and Otherside IPA, along with four more taps of guest ales. The service is efficient, the pub is dog-friendly, and if you're in after 7.30 on a Friday, you get the resident piano player.

This is a tied house to the local York brewery. It's a very nice clean pub that has one of the most ghastly namings I've encountered. The three legged mare in question not being a physically challenged horse, but an ultra-effective method of hanging criminals three at a time. It's since been outlawed due to health and safety issues, but I digress. It's also known as the wonkey donkey. This pub was very close to where we stayed and was also where our hotel bartender worked on his off-nights! We tried pints of their terrier ( a nice bitter), centurion's ghost ( a scarily easy to drink 5.4 abv beer), and their guzzler (a very tasty session ale at 3.6% abv) Highly recc.d