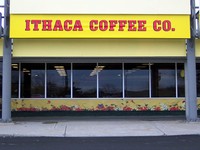 View: Place Reviews
Reviews: 7 | Ratings: 9 | Log in to view all ratings and sort

This is the bar to go to if you are really into beer. Constantly rotating selection of around a dozen brews on tap at any given time. They occasionally do hop-rocketing, which is pretty awesome! Weekly tastings at both locations and any beer on tap can be had as a 4 ounce "taste" for a reasonable price as a build-your-own flight option. You can also "sample" any beer on tap for free (they are great about this, so don't abuse it). If you are lucky enough to be there when James is there, he will easily match your beer knowledge, however good you think it may be. The rest of the staff are very knowledgeable and friendly as well.

They don't have a beer menu, just the big board, because it always changes. No sheets for flights when you order one, so you're an your own there keeping track of what you order. But... it's fine, really.

Not only are they a tavern, but they are a shop. They offer the second best craft beer selection in town (and in the entire region) and offer a crazy amount of stuff as singles! So, throw a few back, shoot the shit with the other beer geeks, then browse and build your self a six pack (or a 5 pack, or a 10 pack, whatever you want). Unless you go to Finger Lakes Beverage Center, you won't find a better offering! Prices are more than fair.

To top it all off, they sell brewing supplies, and have a great selection of fine cheeses, gourmet import and specialty foods, and baked goods and candies. The only place I know where I can get a fresh pint of amazing craft, pick out a few singles for the night, and grab a Vosges haut chocolate bar and a pint of Jeni's Ice Cream for dessert.

Just don't bother with the coffee. Go to Gimme Coffee if you want that! Seriously, the coffee is sub par. Any place that claims to be coffee geeks and stores their coffee in those transparent, non-air-proof, self-serve bulk bins along with pre-ground bags... I mean, even if it were the best beans in the world (it isn't), it wouldn't stand a chance. Where they fail in coffee, they succeed in beer (and food).

Food? Yup, they do that, too. They offer some basic sandwiches and baked goods, which aren't great, but are good enough. They also have a build your own cheese plate option, which is cool. There's plenty to eat here, really... go browse the store and find a bag of some delicious thing you never knew existed (or know about but can never find) and munch on that.

OK, so what about wine? Surprisingly, they offer wine and a half way decent selection. OK, I should qualify that. If you're a real wine geek, you're not going to be impressed and you'll probably turn your nose up. That's OK. It's the wine equivalent of having a Sam Adams seasonal, Stella Artois, and maybe a Sierra Nevada on tap... does that make you an awesome craft brew bar? Surely not. But... it's not half bad. And beer bars are usually BAD when it comes to wine. But, ICC have about half a dozen to 8 (guessing) wine offerings by the glass that are decent (to me) and they have a really cool, super fancy vacuum pump, climate controlled dispenser thing. Yeah, really. That's pretty sweet. So go ahead and bring that friend that says they "hate beer, and they only drink wine" and at least they'll know they aren't being served some oxidized motor oil that was opened God knows when.

Seriously, this is the best bar in town! Easily. Hands down. And it's usually where I go for all my beer needs, unless I need an even wider selection, in which case I go to the Beverage Center.

If you can't get down to fingerlakes beverage center or just happen to be in the triphammer mall this is a good place to stop. Ithaca coffee have a pretty decent craft beer selection, 5-6 different beers on top for growlers, plus excellent coffee. The staff is always pleasant and helpful. As a previous post has stated since this location is a little less traveled they tend to have a few beers that the beverage center has sold out of. Overall I like the store, their prices are decent, and I usually pick up a few beers when I go in to get wine next door or pick up coffee beans

I will choose to go to the ICC only when I'm close to it. I'd much rather make a trip to the Finger Lakes Beverage Center but as some competition? This place isn't half bad.

In fact, it's probably much less traveled than FLBC so if you are looking for something that has sold out of FLBC, you might be able to snag it here.

I was able to find Ken & Fritz stout from Sierra Nevada and Red & White from Dogfish Head long after FLBC had sold out of it. So that was pretty cool, actually.

The one time I went to fill a growler, they were out of CO2 so I wasn't able to but they do have 4 or 5 lines with a pretty good rotation.

An ok beer selection in a very nice and large gormet store (along with a coffee bar). They fill growlers with about 6 lines. The selection was decent: IBC, Southern Tier, Ommerang, along with some farther away selections from Colorado and California. On a different rack are the Belgiums, and a small selection of other Europeans (Youngs, Murphys).

Lots of people around to help you out- when I checked I was asked if I wanted a cold bottle of anything I was getting.

Great value for a store that's pretty near my house and adjoined by a liquor store, but the selection pales in comparison to FLBC so I can't see going there too often.

Go on, read a few of the other reviews to check out the layout of the place - they're telling you what the deal is. Me? I'll tell you about my experience there... So, I take my kid to the Y for swimming lessons, see? Well... ICC is pretty darned close to the Y. Heck, it's almost on the way home! So, what the hey, since I'm not going to FLBC any longer (my fault), I've gotta see what else is available locally, don't I?
I don't think the selection is really big. There are a few local breweries, a few Colorado breweries, a few other US brews and a smattering of Belgians. They've got a setup for growlers and a cold room in addition to storage on the ~3 double racks they have set up. Maybe they hide additional beer in the back somewhere, but on display there are only a sixer or two of each kind of beer.

I was helped within a minute of showing up in the beer section then that guy went away and another came over. Both of them commented on what I had already taken and had questions or suggestions based directly on those. Suggestions included maybe taking a bottle out of the cellar instead of off of the shelf (a pretty good suggestion). Heck, each of these guys noticed that I had a lot of bottles and offered to get a box for me.

I bought 7 different kinds of beer and each has been perfectly fresh and perfectly drinkable.

If you're up on the hill, this is a perfect place to get a beer for a special event. It seems a bit less likely to be where you'd shop for your everyday stuff.

Altogether pleased with the experience and I will be back. More comments to follow.

I had always thought that there was just gourmet food and coffee here, very suprised to find some quality beer as well. There have recently added 4 or 5 taps for filling growlers. They had Brooklyn Chocolate Stout and a couple Ithaca beers for a while, they've added an Otter Creek selection recently. They sell two growlers one is a nice flip cap type for $20 and a screw cap "jug" for a couple of bucks.

The beer selection is good. All the beers are available as singles as well as six-packs so you can sample a bunch. They have a number of Stone bombers, and a couple Smuttynose Big Beer series beers that I haven't seen elseware. The number of beers isn't huge, which seems mostly limited by space, but what they do have is solid.

Another plus to the store is the gourmet cheeses that they offer, makes for a great one stop evening of entertainment.

Here's a nice little find in a city that is rapidly becoming a beer haven. This gourmet store is located in Triphammer Mall, one of several little plazas and malls near the intersection of Triphammer Rd. and Rte. 13 in Ithaca. The store shares an entryway with Triphammer Wines and Spirits, a fins wine store.
Although the name says Ithaca Coffee, the store sells much more than its namesake. It also carried a wide variety of cheeses, chocolates, sauces, spices, teas, jams, jellies, etc., all of which were gourmet. But on to the good stuff...
The selection of craft brew here is nice -- obviously nowhere near that of Finger Lakes Beverage Center, but nice nonetheless. Several local and Northeastern brews, such as Longtrail, Ithaca, Southern Tier, Wagner, etc. Also a nice mix of some of the easier to find, but quite tasty West coast microbrews like Stone, North Coast, etc. Good little selection of English and German ales, as well.
Most importantly, they have growlers. About six tap lines. When I was there, they featured Brooklyn Black Chocolate stout as the most impressive, with a few other brews that it would be nice to find at your local watering hole from time to time (I think there was a Paulaner or something like that, and maybe a Sierra Nevada and a Southern Tier... can't remember the rest).
The real great thing here is the prices. $4.00 to buy the growler jug, or a refill (of Brooklyn) for $7! All the other beers were approximately the same or lower price. Bottles were good too. A 22 of Stone Smoked Porter was about $3.50, pretty cheap I think.
Also, the store lets you mix and match singles into your own six packs, at pretty much the same cost as a solid six pack. Overall, a nice little beer store that can't compete with FLBC, but is a good place to check out for its growlers and prices from time to time.


Ithaca Coffee Company in Ithaca, NY
Place rating: 4.11 out of 5 with 9 ratings