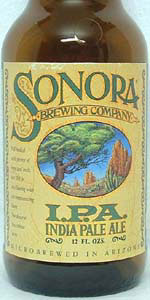 Notes:
View: Beers
Reviews: 8 | Log in to view all ratings and sort
Reviews by TheLongBeachBum:

Weird, I note that are few reviews for this Brewery - and none for this beer. So for the first IPA one, here goes.
Well it's different. Head is more voluminous than the last bottle, and it leaves a nice lace pattern on the glass walls. Flowery sweetish hops in the aroma, quite a fruity nose. Smells hoppier than it tastes. The beer is a dark peachy-orange color and quite cloudy, as indeed it was last time. Sweet initial mouthfeel, quite prevalent but subsides to make way for a gentle bitterness. The finish has that annoying acetic vinegar after-taste that I also got with the Sonora Pale Ale. It's a fresh sample, and from a specialist beer store that I have not had any problems with so it's definitely something with the beer = Not good.

Not to my liking to be honest, too much of a jumbley beer, unbalanced and not what I expect from an IPA.
As I said last time - it might taste better when it gets to India !!!

I have had 2 Sonora beers, and the IPA twice now - both times it was a disappointment, and the lingering acetic finish is really off-putting. The last 4 fl. oz. was dumped. I will not buy this again, save if I want something to put on my Fish and Chips with the Salt.

I need to wash that lingering vinegar taste away, wheres my Stone IPA gone???

Mustard from District of Columbia

Appearance: Pours a dark, ruddy tangerine hue; off-white, batter-like head; retention is only decent, but lacing is quite plentiful.

Notes: Somewhat derivative, but nothing bad; rather enjoyed it, actually.

Pours from the growler a brilliant copper-amber color. It is topped by a frothy tan colored head that is initially two-fingers thick. The aroma is sharp and pungent a mix of pine, menthol and perhaps a hint of sweet citrus fruits.

The taste of the beer is sharp and pungent as well. There is a nice maltiness here that is lightly sweet, with a touch of caramel and a dry toasted malt note in the finish with a bit of biscuit-like notes thrown into the mix. The beer is light enough on the palate to be quite drinkable, but still has a richness and fullness to it that accentuates the hop character. There is a solid bitterness throughout this beer as well; starting with a gripping raw hoppy bitterness, moving through to a long herbal bitterness in the finish. The really striking thing about this beer is that there is a striking mintiness to this beer. It is quite noticeable and really dominates the flavor profile.

While this does not have the typical flavor profile of an IPA, the mix it does have is striking, and atypical enough to make this a really enjoyable beer. I was pleasantly surprised by this beer and definitely recommend it heartily.

Enjoyed on tap at the brewery showcase restaurant. Hoppy aroma, cloudy grapefruit colour with white head and lacey. High carbonation. A bitter that is more than a regular IPA although not at a double IPA level. A bit above average for the stle if not for the carbonation.

Medium brown color. Small white foamy head. Aroma is fruity and a touch spciy. A medium bodied IPA. Malts are fruity and sweet. Hops are mild for an IPA and not very bitter. Nice flavor. Mouthfeel is full. Finish is clean. Aftertaste is slightly bitter.

Well, the color is nice, a nice American IPA dark orange, with a head that retains fairly well. Kind of a strong aroma. Citrus, rind-like, and floral hops. However, it's very sweet, both from the hopping and the malts, and I find that a bit undesirable for this style. As for the taste, it's not as hoppy as I would expect, but it is reasonably hoppy. Mostly rind-like hops, a little citrus. Malt is sweet and grainy. Like the nose, it's very sweet where it shouldn't be. However, it does improve as it warms. The sweetness is toned down a bit. Overall, it's not a bad beer, above average, but just give me Stone IPA instead, and I'll be very happy.

A slightly cloudy amber color, the head is "mountainous", frothy, beige, long lasting as is the lace. Nose is floral, malt, sweet, and a nice "Sniffing Beer". Front is malt, sweet, the top light, the finish is appropriately hopped, acceptably dry, and satisfactorily carbonated, a good drinking beer, not great, but darn good actually.

Had some of this down at the Sonora Brew House in Phoenix. Nice creamy head that left a generous lacing. This has an orange hue, much like other America IPA's. It had initially a nice hoppy smell to it leaving you with a noticeable fruit finish. The taste is not overly hoppy with a very evident grapefruit finish. Overall this is a very drinkable beer, one that satisfies after a hard day's labor.
I have also recently had this in a bottle which seemed to be better than the on-tap version but perhaps my palate was altered by the cigar I was indulging on. Sonora is a fairly small brewer and the quality can change from batch to batch. You cannot give up on this brewery as they seem to be getting better with time!