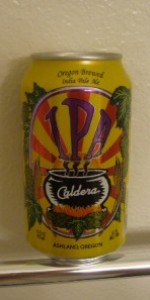 Bought in 12 Oz can in okc. Poured into a glass and enjoyed in Amtrak sleeper car en route to Chicago.

Aroma is a full mix of hops and malt.

Flavor is a bit muddied to me. A bunch of hops, but too many bitter and enough floral for my taste. Very rich but not in balance. The different notes don't play well together.

I would have liked this one better with more sprucey and floral notes.

Appearance - Golden orange color with some small debris (looked like hop stems)
Smell - Piney, a bit of grapefruit, a vegetal quality to it
Taste - Diacetyl, grassy, hint of grapefruit
Mouthfeel - Light carbonation which makes this beer a little heavy and sweet for the style
Overall - I have had much better IPA's than this. Not terrible, but not nearly my go to IPA either. I thoroughly enjoy the cans though!

Nice west coast IPA. Dark color, slightly lighter than an amber. The smell is actually a little more antlers than I expected. The taste is relatively mild for a west coaster, with slightly less citrus/grapefruit and more generic bitterness.

Poured 12 oz can into standard pint glass. This beer is very clear, and is amber/orange in color. A beautiful, foamy head with substantial lacing. The aroma is toasted malt, licorice, orange, and grain. The flavor is malty up front with some hops bitterness in the finish. The mouthfeel is on the watery side, but it's clean and the bitterness is not too intense. The malt balances the hops well and make this an excellent IPA.

Lots of hop aroma. Mostly citrus but I get some woody variety too. There's a caramel malt underneath with a hint of esters but it's pretty much hops.

Nice orange color and very clear. Started out with a big off-white head that fades immediately to a little layer of wispy foam over the top of my glass.

Very pleasant right off. It started out very bitter with citrus hop oils but there's a solid caramel malt flavor that fights through. Each sip has a great bitter/sweet interplay of hops and malt. I get a hint of roast malt in the aftertaste but then there's a lingering hop bitterness.

Good stuff in a can. A nice well balanced IPA.

once again, thanks to Jaap for sending me this one!

A: pours a deep dark orange with some brownish hints to it. pours a nice 1/2 fingers worth of head formation that dissipates rather quickly, but with a couple swirls of the glass, it quickly rises again.

S: awesome citrus (orange peel and lemon zest), some grapefruit, pineapple and even mango. terrfically balanced with a blast of hops. i also pick up on a sweet caramel backbone that holds this brew together.

T: big earthy hop bitterness, sweetened malt and a subtle peppery spice in there as well. the fruits aren't as nearly prominent here as they were in the nose, which is probably the most suprising aspect.

M: big carbonation, solid medium bodied, the palate is left with the dry hop bitterness and a slight touch of citrus.

O: if you like big bitter hopped up brews, this one is a must try. the aroma of this brew is amazing with the big tropical fruits, and I wish it carried over into the taste. Instead, as previously mentioned, the hops become the dominant player and the fruits take the back seat. Nonetheless, this is a great beer, that is has fairly high drinkability.

Thanks to Kegatron for hooking me up with a can of this.

A-Bright golden copper with a thick light tan/off-white head that reduced to a thin cap and left copious lace.

S-Sharp spicy citrus and pine hop aroma with a bit of apricot. Backed up with light sweet biscuit malt.

D-A hop forward, every day drinking IPA that has plenty of flavour to make you happy. Good job, could use a touch more citrus----&gt;or maybe I need a fresher can? Will certainly visit again.

I picked this up today over at The Beer Dispensary in Apex. It has been a rainy, cruddy day and I just felt like picking up an IPA or four, so here we are. I have never heard of this Oregon brewer so I'm hoping for the best.

I love the color; an electric orange with a cloudy, almost opaque body. The head dies a little early for my tastes and the lacing doesn't look exceptional. The nose is very fruity for an IPA, with grapefruit, pineapple, and the ubiquitous pine.

Plenty of flavor up front here, mostly of the withering hop variety, but something seems a little off and the finish seems to fizzle rather than pop. The mouthfeel is thick and (I never say this) could probably benefit from additional carbonation. Not bad at all, but slightly disappointing. Definitely glad I gave it a try, however.

12oz can poured into a pint glass

Pours a pretty amber-golden with a nice head a very pretty lacing. Smells delicious -- fresh and hoppy, citrus and floral and more hoppy.

Taste is some honey up front and floral throughout with a strong hoppy bitter aftertaste.

Mouthfeel is medium bodied, very slightly filmy, very slightly sticky. Very drinkable. Very pleasant. Nice to have a good beer in a can for those occasions where you can't use glass.

A friend of mine brought this beer for me from a trip to Oregon.
It poured a hazy amber orange and produced a about one finger high, white bubbly head. It dissipates fast and leaves good lacing.
The smell is very intense flowery hops, with a nice combination of orange, peach and citrus.
The taste is just like the smell announced. Fruity citrus flavors up front, great hop character in the middle and a bittersweet finish, where some carefully measured orange balances a slight bitter end. Great beer and something I would love to try on tap.

Acquired from Tiklmelmo courtesy of the Hometown BIF, so a big "Thank You" goes out to him. Poured from a 12oz can into a US tumbler pint glass.

A: The beer is a light golden brown color, with a large off-white head that fades slowly and leaves a thick lace on the glass.

T: The taste starts out sweet with flavors of citrus and caramel that are quickly followed by strong but not over-powering and very complementary hops bitterness. The malt character is hearty but not too heavy and provides a very good balance. The after-taste is slightly sweet and slightly hoppy.

D: Very tasty, goes down quite easily, not too filling, decent kick, very good representation of style, this is a very solid IPA that is worth drinking for a long time.

copper or amber in color. pretty clear with an off-white hop head forming on top.

smells of pine up front and a hit of citrus zest toward the back.

taste is refreshingly hopped. malty sweetness amongst the pine, resins, and citrus.

mouthfeel is crispy with a slight bite. definetly drinkable.