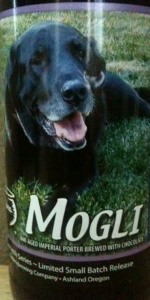 This was poured into a snifter.
The appearance was a black color with a rim of of a tan cap of a head gently allowing minimal lacing after dissipation.
The smell had a ton of milk chocolate, dark chocolate, a good amount of coffee and a warming booziness underneath.
The taste was mostly sweet through the chocolate and booze. Coffee lends to some light bitterness and roastiness. A light mostly sweet aftertaste accompanies a boozy finish.
The mouthfeel was moderately medium bodied with a nice sipping quality about it. Carbonation felt right for an imperial porter.
Overall, this was a really nice imperialized porter, though not a true style, still a stellar offering, I'm looking forward to having again.

Mogli was a chocolate lab and the beer that bears its name is also brown (and no more transparent either, it's pretty opaque stuff). The foamy, off-white ring of head and splatters of lace remind me of the kind of slobber you'd expect from a big dog. Maybe that cute picture on the label is to blame, but I just want to cuddle up to this thing...

And the aroma makes it even more tempting. The huge block of bakers chocolate is complimented by bourbon-soaked oak chips which contribute nuances of vanilla, toast, caramel, and pantry spice. Usually where there's chocolate there's coffee but not here - there's not a trace of astringency or roast. It's superlatively satiny and sweet.

Mogli is very much a chocolate beer, as advertised. Each sip reveals an abundance of light brown, milky, silky-sweet fine chocolate taste and a few big, fluffy marshmallows on the side. For all this we have to thank "added flavor". I'm not a fan of this tactic and view it as cheating but, hey, you can't argue with the results. The flavours is truly delicious.

I love dark chocolate flavours in beer. The bitter or bittersweet, chalky, roasty, earthy tones it provides are natural fits in things like porters and stouts. Milk chocolate, however, not so much. Of course, there are exceptions to every rule and Mogli, with its Cadbury candy bar-like flavours, is definitely an outlier. 8.5% porters aren't normally so approachable.

I'm a dog guy - not a cat person - but would have great things to say about Mogli whatever the name or label. It is luscious, balanced, and deliciously dessert-like. Sure, it tastes a lot like Ovaltine and Hershey's powder (such are the effects of "added flavor") but it maintains enough malty depth and body to still qualify as a serious, substantial porter.

Thanks to Tim for bringing this one to share. Hadn't heard much of Caldera, but I'll never turn down a beer that I haven't had before (especially from Oregon). The pour was mostly black with a super deep, ruby-red only showing itself when held directly in front of the light. The nice, khaki colored cap sits pretty foamy around a half-inch and lasts for a decently long time.

Very nice, "porter-like" aroma up front - I know, such a great description, right? Light coffee beans, tons of sweet chocolate, and seemingly heaps of cocoa powder. I thought the absence of bourbon was strange, but then I realized that this was merely "oak aged" and not necessarily from a bourbon barrel. Still, the oak notes were fairly subdued and could easily be missed. Some dark raisins reside in the back, but chocolate is the real star of the show. The more this warms up, the more it begins to smell like pure baker's chocolate. So sweet, rich, creamy, and savory. I was smelling the empty bottle long after this one was gone.

It came as no surprise when I took my first sip and was hit with an insane amount of sweet baker's chocolate. The aroma actually lead me on that the beer would be a bit sweeter than it actually is, but that certainly isn't a bad thing. The level of roast is somewhat low, but it's still present; lightly roasted malts and creamy coffee. The roast is a bit more noticeable in the aftertaste, that's for sure. The oak is still pretty mild, but it adds another complexity to the beer, no doubt. Just the same as the aroma, the taste seems to get more and more engulfed by chocolate as it gets warmer until eventually you're sitting there with a glass full of melted baker's chocolate. Definitely sweet, but manageable nonetheless. Medium body, not quite thick enough to be called thick, low-medium carbonation and a lightly silky mouth feel.

Wow, definitely surprised by this one. A very nice and easy drinking porter with seemingly no distinguishable alcohol at 8.5% ABV. Super-chocolate heavy, so cocoa haters won't like this one. Despite the sweetness, it was very refined, manageable, and extremely far from cloying. A very nice treat.

This review is for the bourbon barrel-aged version of Mogli imperial porter.

Draft pour into a dubbel goblet at the Caldera tasting room in Ashland.

A: Uniformly opaque black, with almost one finger of beige foam head. Moderate lacing remains on the glass.

T: Toffee, dark fruit, and vanilla to start with bourbon and bittersweet chocolate emerging later. The finish is smooth and full with bourbon. Bourbon flavor deftly asserts itself without being overpowering or intrusive. The presence of alcohol is also handled well here because alcohol flavors are not detectable.

M: Medium viscosity with low to moderate carbonation. This beer is very smooth and gently warming on the palate. While a heavier texture would not be out of place here, nothing about the mouthfeel of this beer is wrong.

D: This beer is both drinkable and delicious. Despite its spirit-infused imperial pedigree, the palate is not fatigued over the course of drinking a glass. Compared to a Ballast Point bourbon barrel-aged Victory at Sea sampled recently, this beer is more drinkable but less extravagantly flavored (and likely also lower in abv). This beer was sampled by three other beer drinkers unaccustomed to barrel-aged beer and each was impressed by it.

Smell is sweet chocolate. Like liquid malt balls. Hints of vanilla and oak.

Lots of cocoa and chocolate.Tastes like Whoppers and Tootsie Rolls in a blender. Some oak, burnt sugars, and roasted grains follow, with a strong chocholate aftertaste that is pretty bitter. I also get a peat moss flavor like a Wee Heavy would have.

It seems like I should enjoy this a lot more. Especially reading through my description. There is just an out of place musty/mossy taste in there though that I dont care for. The bitterness also lingers too much. Still a very good beer, but not what I hoped for.

Poured into becker pint glass; pure black with a nice two-finger tan head that fades slowly leaving a topping of foam and nice chunky lacing.
Smells of chocolate, coffee, oak, brown sugar, vanilla...lots of sweetness and aged character, definitely different than the average roasty porter.
Taste is...hmm. It's huge milk chocolate, not much coffee at all. Very sweet, like a chocolate milkshake. Lesser hints of things from the oak aging, oak and vanilla and bourbon and that, but mostly it's all chocolate. None of the roasty flavor I'd expect from a porter, even an aged one.
Mouthfeel is very full and creamy, surprisingly so.
Overall this is very different from the porters I'm used to...this comes off almost as a milk stout. I can't tell how much of the sweetness comes from the aging and how much is the beer itself. Stouts are porters, but porters are not stouts...but then again the American tradition is to break the rules. So what that gets us is a creamy, very sweet porter that drinks like a milk stout instead of the bitter, roasty style it usually is...but it's still delicious.

A: pours a dark brown, nearly black with mahogany color around the edges when held to the light. Thin beige head that quickly reduced to a bubbly beige collar along the edge of the glass.

S: very sweet with woody undertones! Sweet milk chocolate dominates, a good dose of vanilla adds to the sweetness. A slight woody booziness really enhances the aroma and balances out the sweetness so its not overbearing.

T: once again milk chocolate and vanilla dominate but a little better balance than the aroma suggests. Heavy milk chocolate with a bit of vanilla upfront, a hint of oak. Roasted malt/chocolate malt give a dose of breadiness that balances the sweetness. Finishes with a nice dry oakiness.

Wish this was a little easier to find because its a fantastic brew. Only complaint (and this is not picking especially with a porter over a stout) is that the mouth feel is a little light. If you want chocolate, no reason to look anywhere else.

Super chocolaty notes, with a mild coffee undertone. Strong effervescence mouth feel, and solid color and head. Porter bordering on texture and taste of a stout. Good from start to finish, leaves you wanting more. Tough find certainly worth the price.