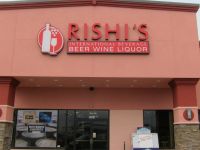 View: Place Reviews
Reviews: 51 | Ratings: 81 | Log in to view all ratings and sort
Reviews by fredmugs:

OMFG...this place is the schnnizzle....If you want to find the motherlode of beer in the Grand Rapids area this is the first place to visit....

One of the best stores I have ever been to

Tier one store so they get all the limited and new to market beers you are looking for with an already large and ever growing selection of year round and seasonal beers from around the world.

One of the top two bottle shops in Grand Rapids. The owner is super friendly, and the store carries an excellent selection of local, national, and foreign beers. However, Rishi's prices are about a dollar higher per bomber or six-pack than the other stores. Until more discounts are offered, I'll continue to start my beer hunt in the other places.

I went there today for the first time and I'd say it was a pleasant experience. Friendly atmosphere and nice employees who are helpful with any questions. They have a nice selection of a lot of things, i found a popular Japanese beer that I couldn't find anywhere else, among other beers I have never heard of.

Their pricing though, seemed a bit high. Like other reviews stated, and I was prepared for, paying a little extra than I could elsewhere if I could find some of the same things.

But overall, because of their large selection, and friendly and seemingly knowledgeable staff (only one visit so far and judging from my interactions today) this place is nice. Just be prepared to spend a little or a bit more than elsewhere.

I've been in to Rishi's more than a few times, being that I live about 20 minutes away. While the selection is great, the pricing is far from it. The markup here compared to other stores is typically 15%+.

Today was honestly the first time I've been in there and actually found what I came for (Short's Batch 5000). I actually called the store after another BA clued me in to them having the beer in stock, and was told "we don't have any yet, but we should shortly." Interesting, because said BA's Wife had just left with bottles of Batch 5000 prior to me calling Rishi's.

I was told $22 for that bottle (so I could only assume my other 2 bottles brought the total to $38). After returning home, I learned that the $22 bottle actually cost me $25. Mind you, Rishi is the one who told me this, not one of his employees.

The majority of the beer in here has no pricing on it, so be prepared for a shock at the register. The service is always friendly and helpful, but for the prices they charge, that should be expected.

I'd definitely stop in here more if they were more fair with their pricing, and also more upfront/honest about what they have.

I'm don't even live on this side of the state where this store is although I do make visits often. This is the BEST store in the state in my opinion. Nevermind the amazing selection of beers from all of the US, the wall of liquor and the section of wines is top notch. Craft kegs are always in stock in the cooler too. Rishi's allows you to take a single 12 oz from anywhere in the store, not just the singles section. The service is top notch. Rishi and his staff are always greeting you as you walk in the door, are eager to make suggestions and thanks you for your business. Great selection of meads too. I'm always glad to make a visit to this store. You won't be disappointed.

Phenomenal selection. Great music playing in store. Very friendly and knowledgable staff. Downside is individual beers are not labeled with a price so it's a surprise when you check out. Overall great place to buy your beer and liquor. I wouldn't have found this gem without beer advocate app.... Just sayin

This is my home store. The best beer selection I've ever come across.