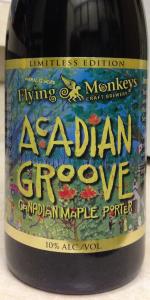 750 ml bottle allowed to warm for about 20 minutes then served in a Porter Bar goblet. Improved with further warming.

Pours with a dark red-brown body that's very slightly hazy and topped by a thin, weak head that soon reduces to a thin ring.

Aroma: wow -- smells like a multi-grain waffle covered with a lot of maple syrup and a touch of maple liqueur (I just checked; there is such a thing).

Flavor: quite sweet but with some obvious bitterness that keeps this from being cloying. In fact, the aftertaste is more bitter than sweet. Very flavorful, with toffee, sweet malts, and far more maple flavor than I've previously encountered in a beverage (I generally restrain from actually drinking maple syrup despite the temptation).

Feel: smooth; light carbonation; quite warming but not hot.

Overall: if "maple porter" sounds appealing, you'll be pleased with this one.

All I can say is: PANCAKES! This beer smells and tastes exactly like 3 things.... PANCAKES, maple syrup, and butter. This is not a beer, this is liquid pancakes.

That being said, I truly enjoyed it, and hope to buy a few more bottles soon. I'm into it.

This is a polarizing brew, some will fall in love while others wont.

It pours a fine dark caramel colour with two fingers of head that lingers around the glass.

Tastes just the same. It is like drinking a batch of maple syrup. If you want a very sugary, maple drink, you will deeply enough this.

Feels good, a decent amount of carbonation, but creamy. The maple flavour lingers for a long time. The higher alcohol content is not present.

Overall, if you're wanting to drink maple and alcohol, this beer is for you. Otherwise, carry on. It's not subtle.

Many thanks to @TurkeyFeathers for sending me this beer. Flying Monkeys distributes to Michigan, but I hadn't seen this beer anyway. It sounded too delicious to pass up. No matter how delicious this is it probably won't match my expectations, I'm about to find out.

Appearance: Pouring down the center of the glass quickly gave a two finger slightly orange-brown colored head. After a minute or so it becomes a thin layer on top of the beer. Acadian Groove is a deep amber color that looks like, sure enough, maple syrup. I don't get any lacing on my glass. (3.75/5)

Smell: Maple syrup bomb. I could smell this easily once I poured and set it down a couple feet away from me. This really just smells like maple syrup, and with the malt and slight alcohol in the nose, it manages to also smell a bit like pancakes. To my nose, it's essentially liquified pancakes loaded with maple syrup. I can also tell this is a Flying Monkeys beer -- if you've had Chocolate Manifesto, you'll smell this beer and likely find remarkable similarities. With Acadian Groove though, instead of getting a bunch of chocolate, it's maple syrup. (4.75/5)

Taste/feel: The comparison again -- it reminds me of Chocolate Manifesto quite a lot in terms of flavor, just with a maple syrup sweetness and flavor over chocolate. There's a very distinct "this really tastes like pancakes and syrup" vibe. I think the maple syrup may be more apparent on the nose, but it's still easily tasted. It comes in with some syrup, then quickly hits with that delicious base beer. Alcohol creeps in and dries up the tongue, and I'm left with sweet maple syrup and a very slight roast flavor. As this beer warms up, I get the slightest doughy flavor so, to me, this starts to taste like doughy pancakes. I know, call me an idiot, but I tend to get a dough/doughnut-like flavor in some big porters or stouts when they warm up (or if they're barrel aged, especially). Somehow, this beer doesn't ever quite come off as intensely sweet for me, and I'm not sure why. It's a very sweet beer, but I keep coming back for another sip without thinking it's cloying, even though I feel like it should be. Maybe the mouthfeel helps with that, as it's more medium bodied than full bodied to make it a little too drinkable (despite really being a sipper), and has just a subtle prickly carbonation. (4.5/5, 4.5/5)

All-in-all, I feel like this is simply the same recipe as Chocolate Manifesto, just with maple syrup in place of chocolate.. and I LOVE it. Because it's so similar, I'm going to give this beer a nearly identical rating. This is a can't-miss beer and is one to be sipped by anybody who likes the flavor of maple syrup... which is pretty much damn near everybody.

Cheers, and thanks again @TurkeyFeathers !

(P.S. This beer pairs phenomenally with bacon. Seriously, make sure you have some with this beer.)

A- Opens well and pours a HUGE 3" brown head with an aggressive pour. Very dark brown color and filtered clear.

O- Very good brew overall. Nice balance and blend of sweet and malt. The only reason this rating comes down a notch is price. It's expensive at $12.00.

This wonderful brew went well with...... Pancakes with, yup you guessed it! More maple syrup!

The beer pours clear and dark brown. Almost Cola-like with a two finger high, fluffy, beige head that leaves a lot of lacing.

I’ve heard a lot of people that dislike this beer becaus the high sweetness of it. But...
I confess! I’m a sucker for sweet stouts/porter and of course this will cloud my judgement...

Mahogany in the glass with minimal head that dissipates very quickly. Syrupy appearance that belies its flavouring. Very strong maple aroma. Sweet natural maple flavour with a big hit from the alcohol that does mellow with time in the glass. Expected porter "flavours" are almost imperceptible. Medium body with very limited carbonation. like other beers in the boxed special release line-up from Flying Monkeys, this is a very heavy handed beer. The maple in this is as strong as the chocolate in Chocolate Manifesto and the cedar in El Toro Bravo. Too much for me, but other might love this.

Flying Monkeys Craft Brewery's Acadian Groove is one of the worst beers that I have ever tasted. The brewery's combination of maple and porter is without any doubt, a complete and total hot mess. Very disappointed and I hate that I wasted $14.99 on this particular beer.

Pours to give a black body with a ruby tint and a thin beige head. The scent is huge on maple syrup, with a bit of roasted malt kicking in the back there too. The taste is very sweet and syrupy though with an oddly pleasant bitter backbone that sort of saves it. It has fairly low carbonation with a nice warmth that isn't too overpowering on the way down. Overall I can't say I'm too into the whole sweet beer concept though this is probably among the better ones I've tried.