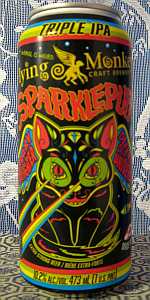 Notes: Exploring reams of deep, dank space with the Rule of 3 in its DNA, Sparklefluff launches with a payload of smashed summer peaches for cushions of fierce malty fluff behind a force field of hops. Three times dryhopped, triple the hop flavour and thrice the aroma, the 10.2% alcohol by volume of this unfiltered adventure glimmers with the epic glory of Sparklefluff, Galaxy Star Fighter Defender of the Universe. Note: Please be prepared for lots of special treats in the bottom of the can. Give it a good shake 15 minutes before consuming.

473 mL can from the LCBO served slightly chilled; the date stamp is illegible. Consumed last night and reviewed from notes.

Pours with a turbid, muddy golden-amber coloured body that is chock full of flaky, flocculent sediment. I get that this was dry hopped three times, and thus hop debris is to be expected... but this seriously looks like liquefied marmalade. Situated atop is one finger of loose, white-tinged foam that barely manages to hold together for two minutes; a thin collar with minimal lace are the only leftovers. Smells fruity and a bit juicy - peach and apricot definitely come through, mingling nicely with hints of mango and pineapple, but overall it's not what I'd call especially aromatic. Slightly floral and grassy too, but without much malt presence.

It's tasty, but it's also about as straightforward as a triple IPA can get. Some grainy malts do come through at the front end, but these are immediately marginalized in favour of orange, peach, apricot and tropical fruit flavours. It finishes with some resiny, pithy bitterness and muddled tropical fruits lingering into a slightly boozy aftertaste. Medium-full in body, with average carbonation levels that lend a crisp bite to the brew's smooth, satisfying mouthfeel. Far more drinkable than it has any right to be - the alcohol is quite well-integrated, which is enough to make this a dangerous beer. I could drink two or three of these in a row, but I'd regret it the next morning.

Final Grade: 4.15, an A-. Flying Monkeys' Sparklepuff TIPA is one of the higher calibre releases that this brewer has put out in recent memory. For "every day" drinking purposes, I'd obviously prefer their Juicy Ass over this one, but Sparklepuff would certainly make for a fine night-capper. Recommended - it's something I'll be returning to in the near future, and as an imperial IPA it's much better than their old Supercollider, which was downright harsh compared to this smooth-sipping devil.

16oz can poured heavily into my libbey imperial stout glass. date on bottom of can is smudged but all i can get out is /29/2019.

Appearance- a hazy straw color with an off white head that dissipates quickly and leaves minimal lacing. don't know if it's the peaches or yeast but there's tons of sediment and floaties.

Taste- just like the aroma. malt is there but very mellow. almost graham cracker like. abv is well hidden. bittereness is very low for the style.

Drinkability- one and done.

Overall- i thought this was an ipa? if anything it's a imperial peach pale. would i drink this if there's nothing else yeah but it's completely meh... that's how i feel about this brewery. it's overpriced and somewhat hyped. i asked the guy at the beer store for his hoppiest beer and gave me this. deschutes fresh squeezed is hoppier than this (and much cheaper too). i get it their labels look cool. I guess that's what you gotta do to sell mediocre beer. 17.99 a four pack come on... i also tried their chocolate manifesto brew and thought i got gypped. would rather just grabbed a six of bell's kzoo stout. so far flying monkeys are high priced semi- average beers.

Hands down one of the best triple IPA’s I’ve ever had. Hands down no bitterness whatsoever. The taste is beyond perfect. But be careful if you have more than 2 you’ll be in trouble. So drink responsible. Overall an amazing IPA.

A rather interesting beer. Pours bright tangerine orange (Tang?) without any real kind of head or lace. And yeah, a insane amount of sediment. Delightfully fruity nose with peach, tropical fruit, a touch of citrus. Similar taste profile. Bright aroma and flavours. A bit of pithiness from the hops, but nothing overpowering in anyway. Nice lingering peach flavour. That 10.2% alcohol is almost completely hidden away, nothing boozy about this one. Thin bodied, but with sharp edged carbonation. Overall very drinkable, flavourful.

Great pour, fully opaque with a great colour. Very impressed with flavour and look but the can is a bit over the top. Look past the label and give it a try if you're into IPAs and high ABV beers.

I was REALLY intrigued when Rieker Bottle Works here in Lancaster, PA announced this one's arrival in their shop. A glitter beer?!? I had heard of them, but never tried one. They had some other intriguing arrivals, so I hied over after work on Tuesday to score a CAN for The CANQuest (tm). A CANadian craft CAN?!? Even better!

From the CAN: "Exploring realms of deep, dark space with the Rule of 3 in its DNA, Sparklepuff launches with a payload of smashed Summer peaches for cushions of fierce malty fluff behind a forcefield of hops. Three times dry-hopped, triple the hop flavour, and thrice the aroma. the 10% [ABV] of this unfiltered adventure glimmers with the epic glory of Sparklepuff, Galaxy Starfighter Defender of the Universe."

I chilled the CAN just enough to make it cool enough for my liking, but that was about it. I did some light in-CAN agitation per my local purveyor to ensure that everything, especially the glitter, was back in suspension before I Crack!ed the vent. I CANtinued with an inverted Glug until the foaming action rushed up in an almost unCANtrollable fashion, forcing me to back off. I wound up with two-plus fingers of dense, foamy, rocky, tawny head with great retention. Color was a murky solid-Amber (SRM = > 7, < 9), evincing loadsa floaties. I have not had a sparkle beer before so this was uncharted territory for yours truly. Nose was very soft, more like a vanilla mango-orange smoothie than a beer. Hmm. This, with so high an ABV?!? Mouthfeel was medium-to-full, but very soft, like soft-serve ice cream served directly onto my tongue. The taste was like peaches & cream, but the ABV was so well-hidden that it was about as dangerous as I have latched onto in a while. Phew! I really liked the creaminess of the mouthfeel throughout. Dang, I CAN almost envision drinking this routinely until a glance at its ABV brings me back to Earth. Finish was semi-sweet, about as sweet as I CAN brook, but very tasty. Phew!

Can, LCBO - Pours a roily light gold ...totally unfiltered, with little "floaties" in it...gorgeous...2 finger puffy white meringue cap..aroma is pungent with both earthy and floral hop notes, grains i the background, NO hint of alcohol...flavor stats with a miraculous balance of big juicy hops and chewy malts, some mid palate complexity(grape skins, pit fruit, musty sweetness) ...has a wet but moderately bitter-fruity finish...NOT A HINT Of ALCOHOL!!This is Juicy ass on steroids and be careful 3 of these will make ya walk funny

Pours orange with a huge amount of yeast particles floating around and a patchy, smallish head. Orange, peach, mango hop notes in the nose. Citrusy, tropical, orangey, floral hops explode in the first sip. Light biscuity malt backing. The mouthfeel is full bodied with light carbonation and a hop mouth coating effect. The finish is medium to high bitterness for a long while.

A nice Imperial IPA with lots of hop complexity and booze is in check for the high gravity. Worth a try.

Slightly hazy gold in color with a myriad of floaties visible. Small head with little retention and no lacing to speak of.

Aroma is fruity led by stone fruits. the triple hops are noticeable on the nose, and overall this is a very pleasant aroma.

Taste follows the nose, fruity flavors, including peach, apricot and melon. The hops bitterness comes in mid palate, and the finish is fruity again with a nice peach.

Feel is nice, not as heavy as I would expect for a big beer. Alcohol, while present, is not overpowering. Finish is dry and fruity.

A good beer. My main complaint is the look. While floaties cause no harm, they are detracting seriously from the look and initial perception of this beer. The flavor and feel make up for this a bit, but not enough to make this a great beer.


Sparklepuff, Galaxy Starfighter Defender of the Universe from Flying Monkeys Craft Brewery
Beer rating: 90 out of 100 with 61 ratings