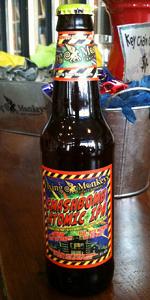 Disappointing. Didn’t see a canned date so don’t know how old this beer was but it seemed like the hops were overwhelmed by the malt. Pours an amber color with some fluffy white head and some spotty lingering lacing. Smells rather faintly of some piney hops, malt, caramel, vanilla and bread. Taste follows the nose, but again the overwhelming sense was of malt and maybe some bread, much less of the hops. Mild, decent, smooth mouthfeel and good carbonation. Would likely not try again.

Very pine forward IPA. Perfectly hopped and nice level of carbonation. Enjoyed this one on a memorable vacation night in toronto and it was the perfect choice.

Yeah, there's a lot of hop in there, but the bitterness and pine are the main contribution. I've grown to prefer those which coax out the nicer, fruity flavours of the hops.

Poured from a standard 473 ml Canadian pint can. It's Good, but not really great. Frankly, I expected a lot more hop flavor/bitterness with the 72 ibu. This beer is surprisingly smooth.

It is a nice citrusy malty IPA. Not exactly a IPA hoppy bomb. But it is good.

The other Flying Monkey (Juicy Ass) was much better IMHO. After that one being that unique, juicy and tasty, this one is quite an average with lots of malt and hop bitterness. Not BAD at all of course, quite well crafted that I can tell but somehow not an outstanding piece, quite like one out of many. Flying Monkey could do much better.

I thought this was inoffensive and generally OK. Had it in Buda so it was quite flat. Unsure if beer or location. Kept below 150 for said reason.

A: poured from a 16 oz can into a pint glass, deep orange amber with a large off white head that lingers leaving good lacing, clear

T: pine up front with grapefruit and a hint of garlic, middle does not sweeten heavily, finish is more pine

O: picked this up at an LCBO in Niagara on a whim, not bad but not as epic as the print on the can implies

I seem to rate higher than the average person (strange, since I usually score things lower than most), but my rankings are in line, so I will continue what I am doing. The colour was a good dark rich colour, with reasonable head. A good balance of the citrousy flavour from the Citra hops and the bitterness, with a clean, slightly bitter taste left over. Overall, I quite enjoyed it.

The words that do not mean beer is the label, too forceful. The beer is balanced, built with great skill and rpofessionality. I enjoy more convincing and complex beers but this one really is.

light and pale looking, medium carb, head mostly dissipates but a little remains for well over a minute.

Taste is sweet, followed by a strong blast of bitterness. The after taste is great. This is really bittersweet! Its a really interesting flavour, very fruity and quite powerful. Its nice, the feel is a medium light thickness.
3/5 hb
Would certainly love to experience again!

I had a taste of this at a recent brewfest, but when I saw it as a bottle in a Mix-a-Six cooler, I jumped all over it out of an inherent sense of curiosity & wonderment.

From the bottle & packaging: "Man Made! Madness Crafted! Barely Under Control!"; "Normal Is Weird."; "Smashbomb Atomic IPA flares with flavor from the bizarre Citra hops. Brewed with strong Crystal malt backbone, the fiery body of this brilliant ale gleams with light."; "Pick Me up!"; "A brewer gone mad! In his newest and most daring beer! Can't stop the hops! Release the Flying Monkeys! Something has gone terribly wrong ... to make a beer so very right!"; "Smashbomb Atomic IPA is the first in a series of Flying Monkeys beers that will start to challenge the minds and palates of Ontario drinkers."; "We're giving reign to the Revolutionary Spirit of the Ontario 'Brewingistas' who are fighting the Craft Brewing misconception that the tamer fizzy yellow beers are what the market demands. We'll stop just short of calling Smashbomb an extreme beer, but it's a wicked hoppy creation using the bizarre Citra hop that's moving us there."; "Warning! Take Cover! This Is Not a Test! The first aroma shockwave that hits your face is full of the rare, explosive Citra hops. With alpha acids clocking in at 11%, Citra's cacophony of flavours dominate this beer. Packing a real fruit punch, Citra adds passion fruit, lime, melon, grapefruit, mango, and papaya notes to the Smashbomb Atomic hit. But don't be fooled. An IPA needs a strong malt backbone, so mad additions of Crystal and Victory specialty malts ignite the fiery body of this 6% ABV ale making Smashbomb Atomic gleam with its own golden energy."; "A Wild Hop Experiment -- Unleashed! We bombarded Smashbomb Atomic IPA with hops at an insane 8 different stages in brewing. Why? Well, why not? Then we took our experiment in harnessing the Hops one further. We unleashed our dry-hopping Secret Creation, the Hoppopotamus, upon this brew. This monkey-made beast circulates fermenting Smashbomb through a bed of whole leaf Citra and Centennial hops stripping all the aromatic oily resins from these juicy buds. Result: we get that aromatic hop explosion and those titillating tropical flavours while still controlling the residual hop bitterness."; "The Flying Monkeys can't stop the hops! The Flying Monkeys Craft Brewery is locally run by a few beer-lovin' friends and a family of unwavering Beer Disciples. Our philosophy? Keep the microbrewery revolution going - there's always room for more fresh and different beer in the 'Brewscape' of Ontario. We started a microbrewery so we could craft the kind of beers we, ourselves, have always wanted to buy and drink. So Heads up, Fellow Beer Geeks -- and release the Flying Monkeys! Peter Chiodo Founder & Brewer Hop Squad, Chief Experimental Hoptological Researcher"

I pried off the cap, but to my surprise, no Monkeys, Flying or otherwise, appeared. I went with a gentle pour since I was busy queueing up Blondie's "Atomic" to listen to during my review. I have been a fan of theirs since 1978, so I continued with an in-glass swirl that raised just under two fingers of dense, light-tan head with decent retention, leaving behind nice lacing as it fell. Color was Amber to Deep Amber/Light Copper (SRM = > 9, < 13) with NE-quality clarity. Nose was certainly explosive with a hoppy fruitiness! My hophead mouth instantly began to water. Mouthfeel was medium. The taste was clearly hop-driven with an abundance of fruity flavors, especially grapefruit, but also with passion fruit, lime, melon, mango, and papaya notes as advertised. I was kind of surprised by its relatively low bitterness, but it was eminently quaffable as a result. Finish was dry, but subtle, still very easy-drinking. I'd like to see this in a CAN!

CAN POURED INTO GOBLET STYLE GLASS.
Appearance is very good. Amber orange colour with good head and retention. Lots of lacing.
Smell is fresh malt and hops but not discernible.
Taste is a little unbalanced. Bitter is great but needs more malt to balance. Hops are pine bitter but lacking flavour.
Mouthfeel is good with medium body and good carbonation.
Overall not bad IPA but not a favourite.