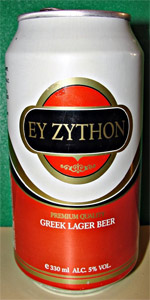 Notes:
View: Beers
Reviews: 1 | Ratings: 2 | Log in to view all ratings and sort

"Ey Zython" Premium Quality Greek Lager Beer. 500ml aluminum can with a red and white label acquired at a supermarket in Kardamena, Greece, and served into a generic stangenglas in my hotel room. Reviewed live. Expectations are average given the brewery. 5% ABV per the label.

HEAD: Two fingers wide. White in colour. Okay thickness and creaminess. Decent complexion and consistency. Leaves no lacing as it recedes. Retention is average - about 2 minutes.

Overall, it looks standard for the style. It's certainly not unique or special, and nothing sets it apart from other pale lagers.

AROMA: Helles malts, generic barley notes, and some cereals & grains. There's no real noticeable hop profile, and I don't pick up on any yeast, alcohol, or off-notes.
A bland aroma of average strength. Nothing about the aroma of this beer is particularly intriguing.

TASTE: Clean barley, cereals, some graininess, and some generic helles malt sweetness. It's a bit too sweet, lacking sufficient (or actually any) hop bitterness to balance the malts. It's a bit malt extract-y, but doesn't come too close to really tasting like homebrew.

No yeast character, alcohol, or off-notes come through.

Average depth, duration, and intensity of flavour. It's a pretty bland and boring flavour profile overall, and lacks any unique or special characteristics. Not a complex or intricate brew, nor is it nuanced or subtly executed. Largely uninteresting.

That said, as a drinkable budget lager, it's not bad.

TEXTURE: Smooth, wet, crisp, and fairly clean. Sticky from the ubiquitous residual sugars. Overcarbonated. Just a biteen syrupy. It could be softer and fuller, but it's not the thin watery garbage so often propulgated in this style.

This texture doesn't complement the taste any more than average, but it doesn't clash with it either. At least it's not boozy, oily, buttery, gushed, astringent, hot, or harsh...

OVERALL: It's the cheapest lager I found on the island of Kos, and as such I think it succeeds at being a low-cost drinkable brew which is intended to get British tourists drunk. Not a bad table beer by any means, and for this market category it's respectable. But the discerning drinker will not be impressed and I wouldn't recommend it to friends.

Not worth seeking out, but worth picking up if you need a cheap Greek brew to bring to the beach. Below average overall. We've all definitely had worse.

Ey Zython from Mythos Breweries S.A.
Beer rating: 2.83 out of 5 with 2 ratings