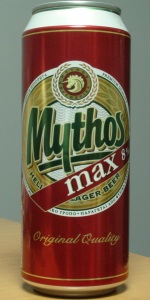 Notes:
View: Beers
Reviews: 2 | Ratings: 4 | Log in to view all ratings and sort

The last of my Greek beers that I brought back from our summer holiday in Skyathos (May 209).

Poured into my 'la Chouffe' tulip glass: Orangey hue to the beer, not the normal golden yellow I expected. Good looking white head on top.

A faint malt aroma, but nothing else apart from a sickly sweet fairground candyfloss smell.

Sweet malts dominate the taste, the alcohol doesn't sit well, too 'in your face'. This is the sort of beer Greek alcoholics must drink to get a quick fix.

As the beer began to warm it did change its mouthfeel somewhat. The alcohol started be become less prominent overall and although it didn't disappear the malty flavour began to assert it's self even more.

Not the best Greek beer I've had or reviewed and closer to the worst.

Arguably the worst un-damaged beer I have ever had. Purchased for novelty value at Bodega Mi Amiga in Panama City.

Pours straw yellow, decent head. Nose is adjuncts (despite can stating only malted barley as malted ingredient), not quite as corn-oriented as local beers but clearly some crappy adjuncts involved or a sub-standard barley I have not run into previously. No hop character at all in nose OR taste.

Taste is pretty much what you expect from the nose, but worse. Initial adjunct-character is covered in mild sweetness doing very little to mask the alcohol. horrid combination. Aftertaste is a strange heavy slightly sweet taste, reminds me of uncooked flour in bread.

Maybe the worst of the crappy euro-lager 8%er's I have had here. Use for comic value or serve near freezing. Only one possible purpose to this beer, and it ain't enjoyment.