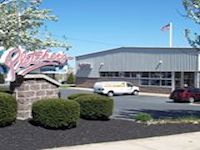 View: Place Reviews
Reviews: 13 | Ratings: 17 | Log in to view all ratings and sort
Reviews by dtivp:

Great Distributor, the store is a big warehouse style, clean bright and the beer is displayed openly and easy to find. Plenty of parking close to the building and the staff helps carry the cases to your vehicle.
The employees are very friendly, helpful, have a knowledge of the beer and show pride in their jobs and the store. The owners do a great job in hiring staff. You do not not typically see this great service at a beer distributor.
Very good selection of beer and reasonable prices.
Wish you were in existence during my time at Penn State and now a little closer to West Virginia.

Pletcher's is a little hard to find off of N. Atherton but worth visiting. It's probably the best place to buy beer in State College right now unless you're looking for really rare stuff.

There are 2 long aisles full of cases, all of which are clearly priced right below, and then an entire wall of cold six packs and cases. There's about 20 feet with 4 shelves that includes warm 6-packs of OK stuff, and the about 10 feet with 4 shelves that's exclusively warm big bottles. Why they're not kept cold I don't know, but the prices were good so I took advantage. Beers from Otto's in the 22 oz. bottle cost $2.61 (except for the Double D IPA which is $3.30) which is less than you can buy it at Otto's and/or Wegmans. In fact, if they've got it there at Wegmans, a single bottle of Ottos in the mixed-six section is still $2 so $2.61 for a 22 oz. is a great deal. Beyond that I picked up several beers from Victory, Stone, and Weyerbacher that are well overpriced in my hometown of Philadelphia. The Weyerbacher D'Tango Unchained that I bought for $5.92 would run me $10 or 12 at home. Additionally, Pletcher's was the only place that I was able to find beers from Elk Creek.

The store (including the parking lot) is clean, neat, and well organized. They currently carry mainly basic stuff except for the large bottles,but that's determined by the customer so if you stop in and ask them to bring in something for you that might help to expand their selection or at least improve it.

Without a doubt I'll be stopping by Pletcher's the next time I'm in State College.

Great selection of Dogfish, Victory, Weyerbacher, and VooDoo. I always check here for new releases, imports, and limited availability beers. If they don't have it, chances are likely that they can point you in the right direction. Hands down, best distributor in Central PA.

heard a lot about this place so i stopped in to check out the selection. its a warehouse style of distributor, which is nice. everything is easy to see and find and is clearly marked. the staff was plentiful and very helpful. case prices seemed to be right about where they should be, maybe a little lower than i expected, which is always a good thing. the variety was pretty good for what is available in the area. there was cold and warm stock, which you don't always see either. overall, a great distributor, which i will frequent when i am in the area.

Before moving to State College I was a bit worried about getting good beer. I was spoiled in Philly with great places like The Beer Yard and The Foodery.

The quality of the beer is good, you can definatley get the standards here. From Stoudts to Dogfish Head to Bell's to Stone to Oskar Blues. You get the idea. The selection is pretty good, about a third of the store is craft beer.

Prices were very resonable. I picked up a case of Stoudts Gold for 25 bucks, I am used to paying around 35 in Philly. Go figure.

Service was good but nothing to write home about. I can't imagine finding a better selection in State College.

My kind of beer store. Nice staff, always helpful & friendly. Stock on display, so it is easy to find things. The "good stuff" located together for price comparisons ... and in the coolers to tempt on the walk back. These guys seem to care about beer & know about what they sell. They are slowly adding more good brands (Legacy, Southampton, Stone, etc) & doing a good job getting product to the retail outlets & getting people excited about what they carry so they'll make the drive out. I've never had old product, I've never had bad quality product, I've never had unfriendly service, absolutely no complaints, ever ... it's the place I want to go when I want a case (or more) for home.

Pletchers is located a few miles north of downtown State College, past the frenzy of College Avenue but situated right in the middle of a new frenzy that includes Best Buy, Walmart and the rest of the development along North Atherton.

Quality: Nice, wide selection of beers, from your macro big boys to relatively obscure German brewers to East Coast micros, this store has enough to please.

Service: I've never ordered a keg, so I have no experience with most of the staff. My experiences at check-out were never bad, but they were taking my money each time.

Selection: Nice micro array, with an emphasis on PA craft brewers. Lancaster, Troegs, Weyerbacher, Penn, Victory, Stoudt's and Stegmaier line the micro area. I've also seen Dogfish Head, Unibroue, Brooklyn, Lindeman's and Ommegang. This is where I bought a Red Bell Variety case maony, many years ago that featured a Cherry Stout and an East India Pale Ale that I found to be far too hoppy at the time (ah, how palates change!).

Very clean and well kept, warehouse style building. Lots of beer but it is easy to get around the place. Very good selection of imports, local micros, and macro-swill for the PSU crowd. Staff was pleasant but nothing over the top and it wasnt even that busy being a non-home game weekend. Prices are reasonable with nothing that seemed out of whack. While this place has nothing to offer me that I cant get back in Harrisburg it is most likely your best choice for beer distributors in the State College area.

Without a doubt, the best of the three distributors in State College. They have a large selection of imports, divided into Belgian, German, and UK. The Belgian selection is fairly sparse, with only Chimay, Lindemans, and Ommegang (American, but grouped there). However, the German grouping is pretty nice: Franz, Spaten, Paulaner, and some other less favorable brands. UK consists of Young's, Sam Smith, McEwans, Belhaven, and a few others. They used to have Tom Hardy's by the case - if I'd only known what it was at the time! They really shine in PA and regional breweries. Virtually the whole Victory, Penn, Stoudt's, Troeg's, Weyerbacher, Erie lines, with each having usually one variety case (this is PA, remember). They also carry a very large portion of Unibroue's line, in both 12oz (variety case is king!) and 75 cL. A fair selection of other US craft beer such as Anchor, SN, SA, and much of Stone's line, this time taped up into groups of 2 cases of bombers. That's right, if you want to buy stone, you've got to buy 2 whole cases at a time. It's nice that they have it, but that's a lot of Stone. Finally, there's a large cooler section, which includes its fair share of the good stuff, and there's no additional charge for it. I've never gotten mishandled beer here before, hence the 5 for quality. Also, much of the staff seems to favor the craft beers, based on conversations I've had. I once asked for a suggestion on a local hefe, and was immediately pointed to Weyerbacher's, which one of the staff "swears by." It was well worth the money. Generally, I'm always asked if I need the help when I wander around the craft section long enough.

Again, the only place worth going in State College. Now, if they tracked my cases per semester...

This distributor is in my opinion the best distributor for the state college area. When my roomates and I have a party, this is where we buy our kegs. The service is really friendly and whoever owns this place should be damn proud to own it and have the empolyee's that are currently there. The selection is very good and the prices are reasonable. I enjoy searching through stacks of beer until I come across the right one. The selection of domestic and even imports is very good. If you like borrowsing the store like me, this place is for you.

I like a beer store where you can do three things:

This place provides all three. It was my favorite of the SC beer distributors.

This is one of the few beer distributors around State College, and one of my favorite. I never knew much about it until a friend of a friend insisted we go there to get Straub...I was young and unaware. But they had cases of good ol' Straubie 16oz. bottles for dirt cheap, and the bottles were refundable. You got a few bucks back with each returned case of bottles, and of course, we used ot throw that in the jar for the next case. It basically paid for itself. But, I digress.
It does have many different kinds of beer, the staff is helpful and knowledgable and it's not too far from campus(behind the Wendy's on N. Atherton). Definitely check it out, compare prices, get some Straub. Mmmm Straub.

There are 3 beer distributors in State College, and I feel that this one is the best. They don't have drive-thru service like the other 2 do, but that doesn't bother me since I prefer going in and taking my time perusing the selection instead of just getting the same-ol same-ol all the time. Virtually every macro you can think of is there, plus a very good selection of micros and an impressive selection of imports that blows the other two away. The owner (at least I think hes the owner... or at least manager) is pretty knowledgeable and friendly and willing to help you out with any questions. The rest of the staff is fine, no complaints. If I havent been in there for a month or two, its most likely theyll have a beer I havent had before, so that makes me happy.