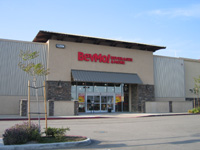 4/5  rDev +3.4%
vibe: 4 | quality: 4 | service: 4.25 | selection: 3.75
This BevMo is smaller than other ones I visited before, but I enjoyed my experience with this location because the employees were engaging and friendly.

Granted I haven't been to BevMo in some time, I was pleased to see beers I haven't seen before. They even had some limited releases that tend to fly off shelves.

The selection is not as diverse as Total Wine nearby, but it's nice to have choices.

Reviewed by PintOHops from California

4/5  rDev +3.4%
Ive been to this place a couple times, they have a very friendly staff & the store seems to be kept up nicely. This particular Bevmo is on the smaller side, you would think it would be bigger standing outside looking at the building but once your inside it's pretty cluttered & it's somewhat easy to bump into someone or something.

They have a decent selection of fine brews from around the world but nothing like the competition (Total Wine & More) that's down the street on Day Creek Blvd. There a bit pricey compared to others, I found them to sell there beers between 1-3 dollars more per 6-pack than Total Wine. What I really like about Bevmo though is there online ordering, it's prompt & you can just swing by after work & presto, there's your order waiting for you in the front of the store!

Good place especially because of the super fast online ordering, the selection is lacking though compared to, ahem, the other place, and I have gotten old beer from them before, not years old but up to 5 months. Overall good & I might be back there sometime.

3.85/5  rDev -0.5%
I have now been to 4 different BevMo stores in the last couple of months, and this one is clean, new, and nice at this writing. Actually it seems to be somewhat smaller than the other stores (based on square footage). The beer is about half domestic craft and the other half mixed from the UK, Germany, Belgium, and some other various spots. But the best selection is for domestics. I am still working my way through Belgium's incredible offerings, so I was a little disappointed (one set of shelves on a rack only), but not too much so, because there's a lot of other choices here.

Generally the atmosphere is pretty stale in this chain- kind of industrial warehouse store feel that I don't really care for. They try to make up with it by painting fun beer-wine related quotes in the wall...

A good selection, and even after only a couple of months being open, they had some beers deeply discounted as though they were going stale (and we are talking Belgian blondes, etc. that can sit on a shelf for a while). I bought 'em and they were fine- gotta like that!

A small to moderate logoed glass selection- my favorite find was Samuel Smith's half-pint glasses. A lot of non-logo glassware (mostly for wine) that looks to be pretty good quality.

The other thing about this chain is the wonderful cheese and chocolate selections to go along with your beers!

Service was ok- nobody really around to help except at checkout, but they were helpful. They have a card-based membership setup like a lot of the grocery stores do- I signed up but haven't really seen any value out of it. Just another way for them to track you, I'm sure.

Reviewed by MiScusi from California

3.5/5  rDev -9.6%
This BevMo is located on the north side of foothill right before the 15 freeway in Rancho Cucamonga (right by the Victoria Gardens mall). I can only compare it to the Chino Hills location, and in comparison it is a little cleaner and better organized. The store is devoted 3/6 to Wine, 2/6 to liquor, and 1/6 to beer. That 1/6 includes a heck of a lot of beer though. They carry every craft brew that its possible for them to buy. There is also a nice section of imports which are sorted by country. Most of it is on shelves at room temp, but there are some beers located in a freezer along the back wall. I shopped here constantly for a few years, and it's worth going to if you're trying to find a good craft beer, but for better service go to the one in Glendora. And if you happen to be going to the one in Glendora you may as well ditch those plans and head 1/2 mile up the street to Lone Hill Liquors.
Feb 26, 2005
Beverages & more! in Rancho Cucamonga, CA
Place rating: 3.87 out of 5 with 5 ratings