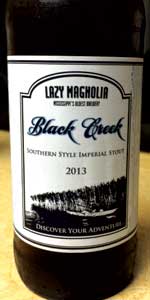 Notes: Black Creek is a Southern-style imperial stout producing aromas of dark chocolate and coffee, with a complexity of roasted barley and caramel flavors on the palate.
View: Beers | Place Reviews
Reviews: 23 | Ratings: 112 | Log in to view all ratings and sort

12 oz bottle. Pours deep black with ruby highlights and a small firm tan head. Aroma of the roasted malt is most dominant, with a bit of toffee. Flavor is rich and malty.

L: Poured from a bottle to a pint glass. Had a black color and a thick consistency. There was a two inch, creamy / fizzy, tan-colored head that lasted an average amount of time. Not much lacing.

S: A pretty good aroma of coffee, malt, and some chocolate as well.

T: Tasted of a good amount of coffee, a bit of dark malt, a hint of chocolate (not quite enough), and some caramel in the finish. The flavor here is a solid one, but it isn't quite as potent as it should be. The coffee takes center stage, but could have been more pronounced. Nonetheless, it's a decent taste.

F: A well-carbonated beer with a smooth finish. Medium- to full-bodied.

O: Black Creek is a likable enough stout, but it has its flaws. Worth a look, though.

Taste: Pretty good, like what Guiness used to be. Roasted malt with little hop influence, richly flavored in the dark chocolate sense without actually tasting like chocolate. There is a sense of sweetness mid palate that is overtaken by roasty malt which lasts through to the finish with a lingering roast malt bitterness.

Texture: Not as heavy as one might expect but certainly no lightweight.

Overall: Likeable without being memorable. It has the heft of flavor one expects from an Imperial Stout and should please fans of that style. Good candidate for the buy local ticket.

Pours a deep brown with a slight reddish tint. The head pours out massive; too much so, actually. It's light tan and loosely foamy. It has good retention and leaves a nice sheet of soapy lacing that slides back into the glass. The aroma is light roastiness with a little boozy sweetness. The taste is good, nothing mind blowing. It has sweetness initially but it's quickly replaced with deep roasted malt. The body is thin and a little tingly.

Aroma is lightly boozy and roasty, with a touch of sherry. Moderate nutty malt notes surface.

Flavor is chocolatey and roasty, with a nutty, toasted malt backbone and rounded with moderate sherry oxidation. There's a touch of a buttery finish.

Overall a decent beer - nothing special, but good.

A: This poured an opaque black with thick tan head.
S: It smelled like milk chocolate and coffee and cream, with a little copper and pumpernickel.
T: It tasted like roasted coffee and cream, with some dark chocolate and copper. It had a clean bittersweet aftertaste.
M: It was somewhat thick with a lot of carbonation. Bubbly body.
D: This was a nice sweet imperial stout. The scent and taste were fairly basic but enjoyable. The body was ok, but the finish was super smooth with well hidden alcohol, so it was really easy to drink. I would drink this again.

I got a couple of these from Alcohol Paul as a free sample. My last experience with Lazy Magnolia was horrendous, so my expectations are low. I also have very strict requirements for stouts, as I have had many very good examples of the style. Side poured from the bottle into a custom Boulevard/Deschutes snifter.

Appearance - Pours as black as motor oil, with a small mocha head that displays a few minutes of retention and good lacing in the meantime. I actually like the label art. Very good presentation!

Smell - Deep roasted malts, some coffee, toffee, and some sweet sugary aromas. There is some chocolate and vanilla notes in there as well. Complex and delicious.

Taste - Much the same as the nose, very complex and tasty! The chocolate and vanilla plays much more of a role on the palate than it does on the nose, but the roasted malts are there for balance as well as the sweetness and coffee notes.

Mouthfeel - Nice and thick, rich. Finishes big and milky, just the way I like an imperial stout. Smooth and rich.

Overall - This is actually a surprisingly good example of the style, and I thought Lazy Magnolia would fall on their face with this one. I am happy they got it right, as I was really looking forward to a good stout tonight. I would absolutely recommend this beer to someone, especially a fan of stouts!

Appearance: Pours a pitch black color. The head is a finger high and lighter tan in shade. A soft, frothy texture is aided in appearance by decent retention. A sticky ring of lacing is left on the glass. (4)

Smell: A bit on the weak side for an imperial stout. Having said that, I do pick up hints of roast, brown sugar, and chocolate. It also seems a bit salty, almost as if some umami elements are poking through. Still, just like I said, the aroma just isn't intense enough for the style. (3)

Taste: It opens up with touches of vanilla cream and chocolate, leading into a subtle roasted flavor around the middle. A very faint hint of hops finish it off, along with a bit of caramel sweetness. This drinks well, I must say - my only real problems are that it's not only a bit muddled in flavor, but low in intensity. It tastes closer to a regular stout (a good one, in fairness) than an imperial. (3.25)

Mouthfeel: Medium in body, perhaps erring slightly toward lightness. Despite a little lingering sweetness (perhaps necessary for the gravity), it's surprisingly crisp...and I'll even say refreshing. Not impressively so, but still more so than most other imperial stouts. Carbonation creates a small tingle on the palate. (3.25)

Overall: I don't know why, but I expect a southern-style imperial stout to be a little lighter and crisper than a regular one, and maybe even a bit refreshing. This hits those expected parameters nicely. The problem is, it drinks more like a normal 6% stout than an imperial one. Decent, and a solid effort, but it can hardly compare with the best imperial stouts on the market. (3.25)

Coffee comes through stronger in the taste. Definitely taste the chocolate throughout the mouth. Nice roastiness. Creamy mouthfeel with light carbonation. Sticky afterfeel.

This is a pleasant stout. It doesn’t really pop in any way but it has some nice flavors with a bit of bitterness to complement. Probably wouldn’t buy this again simply because there is better out there.

A bit thin and one dimensional. It seems like a much smaller beer than it is, could be a robust porter. Needs heavier roast character and more body.

Pours an effervescent dark brown, looking black in the glass, with a huge head. Good retention but limited lacing.

S: Dark roasted grains, a little booze and hints of coffee and toffee. Seems a bit too sweet and, perhaps, contaminated.

Taste: largely follows the nose, but better, being less boozy and having more smoke and char, and a stronger dark roasted grain component.

Pours a deep opaque black, producing a huge (to the point of being difficult to pour) pillowy foam, tan, somewhat lasting (but unusually shortlived for its size) head that leaves little streaks & motes of lace. Aroma is earthy dark chocolate with a vinous hint, toasty pumpernickel, strong coffee, roast & burnt notes with hints of caramel, raisin & slight alcohol. Taste is burnt caramel, bitter dark chocolate, with notes of roasted & burnt malts & thin hints of coffee, prune & molasses with a lively carbonation spice bite in the finish. Aftertaste is earthy, burnt & lightly bitter chocolatey/caramel. Mouthfeel is medium bodied with high carbonation that gives a lively prickle throughout becoming fairly intense in the finish. Overall the taste & body are a little disappointing after the promises of the pour & the nose.

Looked and smelled pretty good. The taste was rather flat. Nothing really jumped out. A serviceable stout. I may not have had a great bottle/batch, as everything else I have had from this brewery has been great.

T: Follows the nose, smokeyness as well along with dryness up front, a little caramel as well. Carob, some woody hops & dark chocolate as this warms. Finishes with caramel, a hint of raisin, dryness, roasty grain & dryness, plus some taffy & roastyness

Very drinkable for the style, not upper rung, but well worth a go. Got better as it warmed...

Nose is kinda weak, especially early. Warming brings something to the nose, and what I can get seems to tend towards roasted malt bitterness, with maybe a light hint of chocolate.

Taste is straightforward and follows the nose. The hop bitterness at the end is a tad strong, however, giving it more of a porter feel to me. The body is a tad under medium, carbonation evident.

To me, this was just an okay beer. Nothing turned me off about it, but not was I turned on to it.

Poured from a brown 12 oz. bottle. Has a black color with a 1 inch head. Smell is of roasted malts, coffee. Taste is the same, only with considerable bitterness, some hops, slight bit of alcohol as well. Feels medium bodied in the mouth and overall is a solid beer.

A - opaque black with thin beige head. Dissipates rather quickly with minimal lacing
S- smells of roasted malt, almost burnt, with a slight coffee ground aroma. A bit of dark chocolate as well
T - you get the coffee grounds right way with more of the burntness. The roasted malt is in there good as well. Not getting much hop except for a tad bit bitterness on the back end.
M - medium-weighted with a sort of creamy feel. Dry finish
O - not a bad brew. Reminds me an awful lot of Tin Roof's Parade Ground Porter.

Lazy Magnolia Black Creek has a thin, beige head, and an extremely dark-brown, almost black appearance, with almost no lacing left behind. The aroma is of sweet, dark-roasted barley malt, coffee hints, chocolate hints, and brown bread crust. Taste is of sweetness, char, dark malt, some cherry, vegetable, cream, and a low hop bitterness. Mouthfeel is thick and syrupy, and Lazy Magnolia Black Creek finishes semi-dry, powdery, easy drinking, and not the least bit alcohilic. Overall, this is an outstanding beer!

A: Obsidian black with cherry highlights. A tan one finger head that lingers to medium bubbles. Light lacing.

O: One of LM's better offerings. Bet this would rock on draft. Glad I bought more than one. Recommended.
(added 1/19/15) I finally got to try Black Creek on draft. Fan-damn-tastic. Everybody was impressed with the smoothness. Now try a bourbon barrel aged, Lazy Mag!


Black Creek from Lazy Magnolia Brewing Company
Beer rating: 88 out of 100 with 112 ratings