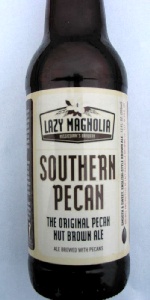 Notes: Southern Pecan Nut Brown Ale is the first beer in the world, to our knowledge, made with whole roasted pecans. The pecans are used just like grain and provide a nutty characteristic and a delightful depth to the flavor profile. This beer is very lightly hopped to allow the malty, caramel, and nutty flavors shine through. The color is dark mahogany. Southern Pecan won a Bronze Medal in the 2006 World Beer Cup in the Specialty Beer category.

I think this beer is underrated. Not a lot of head, but it has a deep mahogany color. You can smell the pecan and it has a subtle nutty taste. I'm a fan!

12 oz bottle into a pint glass. Big thanks to deepsouth for including this as an extra in a recent trade.

Pours a clear, dark amber with 1 1/2 fingers of off-white foamy head. It posesses a thin, fizzy retention that enventually dissipates into almost nothing, leaving some smallish lacing behind. The aroma is fairly pleasant, being a mix of caramel sweetness, some nuttiness, and of course...pecans!

The taste is rather full, with caramel and toffee sweetness, roasted pecans, a lively spice character, a touch of dark fruits, and a smattering of tingling hops in the backend. The finish is sweet with a twinge of bitterness. The mouthfeel has a full, medium feel that is surprisingly beefy for the style but still maintains a slick, creamy feel.

Nice! I was suprised by the richness and full body of this Brown Ale and I must say that this was one of the better ones that I've had lately. Good stuff from down South.

Thanks to duff247 for this one.

Mouth is fairly light, with lower but decent carbonation.

Drink is pretty good, very sessionable, would be a pretty good spring beer. In fact, a little too light for my tastes, but a decent beer.

sometimes I get so hungry
think about pie all day
just a little whipped cream
honey, I'm on my way"

Beautiful cherry-bronze with a healthy infusion of orange that results in bright tangerine trim along the edges of the glass. I have to believe that the roasted pecans give the beer such a unique color; I've never seen another brown ale that looked quite like it. The pale caramel crown isn't very large and is a little too soft to result in much lace.

The aroma, while a little weak, is still pleasant. It's toasted brown malty and I'll be hanged if it isn't a little nutty. It's no more nutty than a few other browns that I could name, however, and there's no way that I could have identified the nuts as pecans.

Southern Pecan is a fairly simple, lighter end of the spectrum American brown ale. Ordinarily that would keep the flavor score down to at least one notch lower than the one I've granted. The reason that it's better than that is that I can actually taste roasted pecans, which are one of my favorite nuts. In case anyone is wondering, the malt bill consist of Maris Otter, caramel and wheat.

Granted, the pecan nuttiness isn't that prominent (Edit: it does become more noticeable with warming and the beer becomes more enjoyable as a result). With a more substantial malt load, this would be a killer, one of a kind offering that would be an instant classic. It's hard to imagine a better brown than a full-bodied, moderately sweet, roasted pecan ale. It's a shame that Lazy Magnolia doesn't brew that beer.

There doesn't need to be an abundance of hops (Magnum, Tettnang) to offset the somewhat flimsy malt backbone... and there isn't. I can appreciate a modest bitterness, especially on the back end, that balances the earthy caramel sweetness just enough without overtaking it. Sweet needs to win out over bitter in a brown ale as far as I'm concerned.

The mouthfeel, as already alluded to, is light. I'm becoming more tolerant of light browns though and will cut it some amount of slack. It's saved by the fact that the fine-bubbled carbonation is neither too much nor too little, but is juuust right.

I'm sitting here drinking my second glass from a growler of Southern Pecan, a Southern classic (or at least a Mississippi classic) out of my own gen-u-ine Lazy Magnolia B.C. pint glass and am having a grand old time. This is a wonderfully drinkable beer and should go well with whatever I decide to eat today. Thanks go out to barefootbrewer for making this possible.

Not sure what to say about this beer. Has little flavor. Do taste and smell pecans. Dark brown. No head. Light. Drinkable but nothing memorable. No hoppyness or bitterness. Thought it was bland and unfulfilling. Just there. No bad, not great either.

Somehow, I expected more pecan flavor. Regardless, this is a very nice Brown Ale that shares some similarities with Amber Ales and Vienna Lagers.

The pour brings a medium viscocity with deep amber, nearly brown colors, off-white foam that initially rises but quickly settles to a lacing across the glass. No real lacing. Maybe a bit light in color for a brown; more akin to a rich Amber.

Medium flavors of toasty and bready malts give a lot of richness and texture to the beer. Caramelized malts also deliver a bold sweetness and richness. Light fruity esters give a subtle complexity to the yeasty bread tastes. Nuttiness boarders on toffee notes with a light buttery/butterscotch flavor. Quite nice.

Mostly malty textures with some caramel sweetness lingering on the tongue. No slickness or stickiness to the mouth. A mild grainy texture persists into the finish.

A nice little Brown Ale that, with some hoppiness and a brighter malt character, could be an awsome Amber Ale. But the maltiness (aside from the caramel sweetness) could make for a great Vienna Lager.

A - One finger of off-white head on a clear, amber-brown body. The foam recedes quickly and leaves little lace in its wake.

T - Sweet caramel malt up front with a subtle nuttiness that intensifies into a candied pecan flavor in the middle. Finishes with a rich, caramel note and a hint of lingering roast.

D - A very nice, malty brown ale. There is a very convincing roasted nut quality to this beer; a combination of candied pecans and peanuts. The sweetness is a bit much and sticks to the palate, but nonetheless it is a unique beer that is well worth trying.

The last of the four new brews from my latest beer club shipment. We don't get this Mississippi brewery's products distributed in my state.

a; Clear reddish copper with a pillowy two inch thick white head which receded to thin surface foam and a little spotty lacing.

o: A pleasant, easy-drinking brown, perhaps slightly light for the style, and any pecan tinge escaped this drinker.

I had this at the Atlanta airport. Pours light brown with white head. Taste is nutty, earthy. Nose has some brown sugar, root beer, bread crust, but artificially sweet. Flavor is the same, frankly. Artificially sweet, brown sugar, root beer, root veg. Sweet finish.. I was hoping for a nice nut brown type flavor, however, I thought this was not good. I would not drink this again.

Acquired as an extra in a trade with theghost3.

Served in a pint glass, poured from a 12 oz. bottle.

A - A very clear dark amber with a thin yet strong head. Lacing falls quick.

S - Nuts, coffee and yeast on the nose with a slight alcohol bite.

M - smooth, light on the tongue, subtle carbonation. Not bad.

overall - There's not a lot of pecan, but there's just enough to compliment this well done brown ale. Good for casually drinking after a long day, when you just want something simple and slightly dessert-like.

T-Toasted malts and toasted nuts are prominent but not indulgent. Hard to identify the pecans but there is a nice nutty dimension to go with the base toasted malt.

M-Medium to light medium...a little slick...low carbonation but I think it works well with this but does make it seem a little thinnish at times..

D-I was very excited to try this beer. About what I expected. A little more body would do wonders for this beer...not much..just a little...not saying it needs to be porter like or anything but it comes off as a little watery....great aroma...that is the highpoint...reminds me a little of the old Longshot Hazelnut Brown of about 1996 or so...

T - Much like the smell sweet malt stands out

Mississippi tick, thanks to spycow aka Chris.

A - Brown beer that gets a little red on the edes with a small head that didn't stick around for very long.

S - Malts with some nuts, brown sugar. Pretty sure that is a pecan thing going on there, and it's decent enough.

T - Caramel, toffee, some pecans, little bit of dark fruit. It's malt forward, but there's a little bit of hops there on the end. Has a decent amount of flavor for 4.25%.

O - Not a bad beer, better than what I was expecting coming out of Mississippi. Easy drinker.