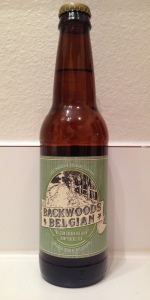 Appearance: Pours a clear copper color. The head is a finger high and white in shade. Poor retention and a less-than-fluffy texture makes me question how 'Belgian' it is. No lacing sticks to the glass, either. (3.25)

Smell: Hrm, I get little Belgian characteristics. Maybe a touch of bread and white grape, and that's it. What redeems it somewhat lies in the tea characteristic. It's subtle, but it creates a subtle herbal sensation that I enjoy. I also get caramel and honey notes. In terms of aroma, it's closer to sweet tea than Duvel - that's nice, but the Belgian part of this brew is really disappointing. (3)

Taste: What strikes me the hardest are the tea flavors - it's very herbal and even a little sprucey. I do like this note in particular...too bad the rest of the beer seems imbalanced. I'm surprised by how alcoholic this seems to be at first, though I get used to it eventually. The rest of the flavors are a slightly muddled collection of white grape, caramel, bread, and apple (these all pop up more briskly around the mid-taste). This just does nothing to excite me. (2.75)

Mouthfeel: This doesn't have the bone dryness or lively evaporation I expect from a good BSPA. In fairness, a lot of American breweries struggle with this part. The whole thing seems heavy and a bit syrupy - even worse, the alcohol isn't perfectly concealed. It drinks okay, just without the nigh-effortlessness I expect. (2.75)

Overall: I like Lazy Magnolia for fighting the good fight down in Mississippi (a state that makes Maryland look like California in terms of distribution), and the fact they brew with such a distinct Southern-fried flair. However, they don't really nail everything they brew, this being a prime example. With or without the tea flavors, this is a slightly subpar example of the style that lacks balance and depth. I'll be sticking with Southern Pecan or Timber Beast from these guys in the future. (2.75)

2.84/5: This isn't giving me a reason to leave civilization

Appearance: BB presents a golden pour, with an ever so slight haziness to it. Has not more than a very, very slim white head.

Smell: With a top note of honeysuckle, there are various tangy fruity esters swirled up with aromatic spice, bready malts, chewing gum, and a drip of alcohol.

Taste: Scantly bready pils malts drizzled with simple syrup ramp up to a range of fruity hints, tasting of orange rind, lemon, apple, and banana dosed with a shot of Prosecco. Cracked clove and a taste of bubblegum follow. On the back half, there's a little honeysuckle, a little alcohol, a little acidity. Fastly drying approaching the lightly crisp finish.

Mouthfeel: A bot over medium-bodied. Medium-plus carbonation. Just a bit of stickiness to it.

Overall: Fairy decent. While not as seamless and graceful as others, it is a solid shot at a honeysuckle infused Belgian-style offering.

First let's take care of business: brewers REALLY need to stop using White Labs Abbey. If they didn't use it in this I'll bite myself. It has become the cliche' of the craft brewing world and it takes over EVERYTHING. I am guessing they were looking to make a lawnmower Belgian and... they got there. Watery with, yet, that slightly abrasive to the roof of the mouth Belgian white sugar sense. and plenty of prickly carbonation: it's just not that interesting, Boring. Watery.

NOW... if they added some spices: zest, coriander. whatever, that might make it more interesting. But still more body would help. I know: abv laws may be the problem. HEY, it's Mississippi. Pilsner malt WAY in the background.

Basically it's that, prickly carbonation and a dominate Abbey yeast-like sense.

It's not bad: just very one dimensional.

Poured from a 12 oz bottle into a hand glass.

T: Tastes like it smells. Yeast is very prominent, a little agave nectar, and some grapefruit pith.

M: Thick and syrupy feel. Filters up into palate and infiltrates the entire nasal cavity. A little bit of sweet hint in the front, and a bitter acetyl finish. A little hot.

Atmosphere is decent. Nice hue, lots of effervescence, slight head, but no real lacing. Floral and yeasty nose. Very strong yeast character with touches of sweetness and grapefruit. Kind of a synthetic feel. Overall, this is an okay quaff.

Aroma, quite a bit of banana, clove. Some sweeter nutmeg and malt. A little spice, pepper, some herbal like hops.

Taste, swetter malt and some grainy wheat type malt. Clove and bubblegum. Some yeast and the lightest barnyard flavors. Finish is fairly dry, light herbal hops in the finish.

Pretty refreshing and easy to drink. Carbonation is lively, about right body wise, in between light and medium. Maybe a tad watery. Abv is certainly well hidden.
Wish it was a little more pale, but this was pretty enjoyable. More like a big blonde ale.

A: Poured from a bottle to a tulip glass. Had a golden yellow color and a clear consistency. There was a small amount of foamy head that quickly dissipated. Not a whole lot of lacing.

S: A largely sweet aroma of citrus, honeysuckle, and yeast.

T: Tasted of Belgian yeast (a lot of it), some citrus, a bit of malt, and honeysuckle in the finish. Not bad, with some interesting aspects to it (the honeysuckle is a good addition), but it is a little on the thin side.

M: An average amount of carbonation with a somewhat flat finish. Medium-bodied.

O: This is definitely an uneven beer, but certainly worth checking out to compare with other BSPAs.

12 oz bottle from Tower in Atlanta. No date despite a place on the label. Served in a Belgian snifter.

Pours clear, gold, with 1/4 inch head. Plenty of sediment is present. Taste is honeysuckle and tea, banana, wheat, and Belgian spices. To me this is about as good as it gets in this style from an American brewery. I would have several six packs of this beer in my fridge if I could get it regularly. Worth seeking out.

Bottle from 4-pack. Pour is beautiful clear light gold. Small fizzy white head dissipates quickly. Aroma of peach, bread and yeast. Tea is subtle. Taste is lightly sweet with a grainy overtones. Moderately dry finish. Effervescent mouthfeel. Body is medium. Better on the cold side where it maintains a crispness. Warming it is a touch sweet. A nice brew. Satisfying and delicious, although it does not lend itself to sessioning.