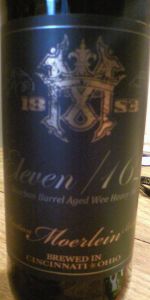 3.92/5  rDev +11.4%
look: 4 | smell: 3.75 | taste: 4 | feel: 3.75 | overall: 4
22 ounce wax capped bottle, no dating that I could find on it. Served in a thistle glass, the beer pours a reddish/brown color with a couple inch light tan head that stayed around for a very long time. There's a decent amount of lacing. The brew smells like caramel, toffee, dark fruit, toasted malt, vanilla, wood and bourbon. I think the taste is pretty much the same as the aroma, but there's also some earthiness and tea noticeable. It's a mostly sweet tasting brew, with a subtle booze kick. The bourbon/barrel character in this isn't strong, just enough that you know it's there. Mouthfeel/body is medium, with a moderate amount of carbonation. I thought this was good, I'm glad I picked up this one!
Jul 02, 2015

Rated by stickydankhop from Ohio

4.06/5  rDev +15.3%
look: 4 | smell: 4.25 | taste: 4 | feel: 4 | overall: 4
As a beacon to all the malty magnetically inclined, The Christian Moerlein brewers devise a lavish malt bomb with the boozy warmth to appease the bourbon lovers, and with an earthen component to attract all those to the "less manicured" character. Their eleventh anniversary "craft beer-centric" taste is one that's worthy of decadence and opulence.

As the malty-sweet and boozy taste seeps deep into the tastebuds, notions of bouron, oak, kiln barley and toast give up their savory and sweet taste. Its slight boggish earth give the late taste an earthiness that's best associated with perfumy cigar with a kiss of peppercorn and peat.

With the malt factors trailing toward a malty-dry finish, its bourbon warmth takes hold and strengthens the pepper, earth and toast. Yet, the honey and caramels persist and give its finish a kiss of butterscotch and smoke.

The ABV's not apparent. Too easy going, the bourbon stands out but the Wee-Heavy's held back. Beer with dark, kilned malts but not anything in particular. Not offensive, just on the boring side.

Rated by drdiesel9483 from Ohio

3.88/5  rDev +10.2%
look: 4 | smell: 3.5 | taste: 4 | feel: 4 | overall: 4
Enjoyed from the 22 oz bomber in a snifter. This interesting Wee Heavy pours a dark murky brown with tinges of red and a HUGE off white head of sudsy foam that dissipates to a thick layer and soapy thick lacing. Nose of bourbon, brown sugars, and a hint of peat malt. Flavors are up front sweet brown sugars, bourbon flavors of barrel and vanilla to the middle and back, and a moderate bourbon aftertaste with modest warming and a light dry finish. Smooth, moderately carbonated mouth feel. Very drinkable. Pretty nice. Give them time, they are getting better with every batch and this is a great step forward. While some would call it heresy I would like to try it blind with a bourbon barrel Innis and Gunn to compare. Need to make a note of that....

Reviewed by nlmartin from Ohio

A- The beer was a gusher a glass of foam no matter how I poured it. This was my first warning the beer was infected.

F- Your kidding. I feel I got screwed.

O- If you are going to make an upscale beer and sell at an upscale price you have to deliver. Moerlein can brew competently do better.

Reviewed by UrbanCaveman from Ohio

Appearance: Pours with an initial burst of carbonation so intense the color appears to be "bubbles", and forms a colossal head of very slightly off-white foam that dissipates swiftly. Once the initial carbonation rushes up off the sides of the glass, the color becomes a deep red-brown, almost garnetlike, clear and dark.

Smell: This was definitely barrel-aged, with an aroma of oak and booze. Beneath those notes lurks something toffee-like, and an odd, almost sour tone of dark fruit.

Taste: Well, that's jumbled and harsh. Alcohol heat takes the forefront, loud and proud, concealed about as well as a white cat in an empty black room with black carpet lit by blacklights. Underneath that, woody oak dominates, with a supporting cast of toffee and something vaguely like booze-soaked cherries.

Mouthfeel: Medium-bodied, though it finishes lighter than it begins, and oddly less carbonated than expected given the initial pour.

Overall: This is not a good BA wee heavy, at least fresh. Age might take some of the edge off the alcohol, and allow for more fruit character to develop. There's nothing particularly sweet to be found, no caramel or vanilla to round out the profile. If you have a bottle, try giving it at least six months before you crack the wax.

Reviewed by jsurfs82 from Ohio

3.62/5  rDev +2.8%
look: 4 | smell: 3.25 | taste: 3.75 | feel: 3.5 | overall: 3.75
Bourbon Barrel Wee Heavy is right up there with my favorite styles of beer. Great examples include Backwoods Bastard, Wulver, BA Big Sound, and BA Wee Heavy from AleSmith. This one doesn't contend with those beers and putting it up there with those may be unfair considering they are world class. Overall it's a good beer but lacking that vanilla and caramel flavor, aroma, and complexity you'd expect from the style. I didn't pick up much Bourbon in this either. A little disappointed with this as I felt like it was a chance for Moerlein to really nail that Imperial Small Batch release. The price point was great and I encourage those guys to continue to go down this path of releasing these styles. It just might take a little refining, almost tastes to me that it didn't have enough barrel time or potentially aged in a barrel used multiple times. I will revisit this beer especially in later releases.
Mar 04, 2015
Eleven/162 from Christian Moerlein Brewing Company
Beer rating: 82 out of 100 with 20 ratings