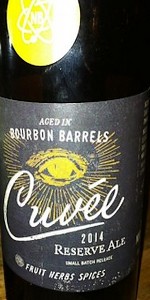 750 mL wax-sealed bottle picked up at the LCBO about a year ago; dated Nov 18 2014 and served at cellar temperature.

Pours a deep brick red-amber hue, rife with tiny black specks of sediment that slowly hover throughout the liquid. Two fingers of frothy, khaki-coloured head are produced on top, which then proceed to steadily wilt down to a foamy cap and collar over the next five minutes. Lots of beautiful lacing, and good effervescence; a year in the basement doesn't seem to have done this one any harm. The aroma is complex, and includes some funky, borderline sour-like notes. Dill weed, zesty orange peel, fruity fig and bourbon make for an oddly enticing combo, alongside sweeter notes of molasses, ginger and herbs. Not getting most of the spices listed on the back, but it's still a thoroughly intriguing bouquet.

Wild-tasting; this is unlike any beer I've had to date. Sweet flavours of demerara sugar and doughy, biscuity malt are quickly overshadowed by this beer's exhaustive list of adjunct ingredients. Fig and raisin fruitiness do actually come through nicely, with the latter half of the flavour profile consisting of a cavalcade of spices and herbs, including cardamom, vanilla and just a touch of cinnamon and pepper heat. Woody oak and bourbon flavours are most prominent at the end of the sip; there's also a slight suggestion of funky, vinegar-like sourness that really synergizes with the spicy, boozy aftertaste. Nearing full-bodied, with light carbonation levels and a soft, smooth, well-aerated mouthfeel. I was a little worried that this one wouldn't hold up after a full year in the cellar, but in fact it has managed to weather 2015 almost perfectly.

Final Grade: 4.27, an A-. Nickel Brook's 2014 Cuvée is an outstanding spiced winter warmer. Last winter I was wavering on whether or not I should purchase this - after all, the 11 dollar price tag is steep - but in the end, I'm exceedingly glad that I broke down and nabbed this bottle last January. The combination of spicy and herbal, sweet and sour flavours is just exquisite, and the bourbon/oak notes are the icing on an already-delicious cake. You can bet your bacon that I'll be picking up a bottle of the (now available!) 2015 vintage for safekeeping.

750 ml wax sealed bottle. Thanks to Sara and Dash for this fine looking one from Nickel Brook.

Appearance - Hazy dark shade of honey brown beer. Tons of carbonation and a lasting finger and change of ivory head. No clarity and the appearance of a dense filling beer. Even some pretty lacing left behind.

Smell - Plenty of spices, dark fruit, ginger and bourbon all make their presence felt. A Unique spicy / sweet interplay between the ginger and the fruits. something earthy about this whole beer as well with additional medicinal herbs.

Mouthfeel - Smooth, creamy yet light body, no suggestion of the 7.5% ABV.

Overall - One of two beers I've ever tried that I've thoroughly enjoyed, couldn't find anything really wrong with it (giving it an overall rating around 4) and yet probably would never seek out again, as I can't think of a time when I would prefer a beer or one very similar to this in style quality and character when there isn't something else I'd rather try, Although maybe that's harsh as this warmed up on me even more as the beer warmed. FWIW, the other was Nogne's Underlig Jul, so maybe it has something to do with Winter Warmers or Spiced Beers for me. Nonetheless, should you happen to come across a bottle for a good deal or for free in passing, absolutely give it a shot as it is a very well crafted winter warmer / spiced beer.

half pint at the brux house, jan 14 2016. murky mahogany. herbal, spicy, tart-fruity (mostly raisins), with a prominent bourbon character somewhere in the mid-palate all the way to the finish. medium feel with a bit high carbonation. the barrel aging here is great, but i don't like the base beer very much

Enjoyed very much. I will be buying again. I like the hint of bourbon. Has a sweetness to it.

This is a lovely beer. Dark fruit, chocolate malt and a bourbon tinge that makes you remember you are drinking something that has been crafted with care. I would love to have a bottle or two of this for Christmas eve, beside the fire. Thanks to Coronaeus for setting me up with these drops of happiness.