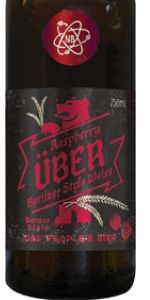 Notes: Our brewers decided to have some fun and the took one of our most scientific creations and made it even more amazing! Nickel Brook Raspberry Uber Berliner Weisse uses our refreshing sour style of wheat beer which has then been aged on local Ontario raspberries. The result is a massive raspberry flavour explosion that still maintains the incredibly unique qualities of our Uber Berliner Weisse. You're going to love this! It's a scientific fact.
View: Beers | Place Reviews
Reviews: 23 | Ratings: 76 | Log in to view all ratings and sort
Reviews by LanceH:

Pours bright pinkish red with a pure pink, frothy cap. Fresh raspberries and some lactic acidity in the nose. Tart acidity, wheat malts and light berries in the first sip. Raspberry and cherry notes and a touch of stale milk in there. Prickly carbonation. The finish acidic and lightly fruity.

A nice berlinner weisse that's more tart than I anticipated. Fruit is there but understated.

This beer pours almost like beet juice. It is deep purple and topped with a pink head that leaves sparse lacing.

The aroma is fruity with raspberry and a nice tart smell.

The flavor starts out with raspberry and is followed by a tart flavor. The finish is dry.

Light bodied with a dry mouthfeel

This beer is light, fruity, bubbly, and tart. It is a nice beer to have on a warm spring day.

Bottle: Poured a hazy bright pale red color Weisse with a small pink head with minimal retention. Aroma of fresh raspberry notes with some light tart notes is pretty refreshing and enticing. Taste is a nice mix of fresh raspberry notes with light residual sugar notes and a tart finish. Body is about average for style with good carbonation. Solid beer with good refreshing notes and some complexity.

Interesting brew. Not super sweet like a lot of other raspberry beers. Downright sharp and metallic to some degree, but that's offset by a ton of fruity raspberry goodness. Look? Looks like red Hawaiian Punch is what it looks like, so no glory there. But big fresh fruity nose and a ton of fruit flavour so that's all good. Mouthfeel borders on harsh, could stand just a touch of sweet to balance the sour, but overall an interesting imbibe, if a bit uneven. You'll love it or hate it.

Deep raspberry red, bit of pink head on the pour, but it dissipates an doesn't lace.

Tart raspberry aroma is one dimensional, but it's awesome.

Raspberry is upfront in the flavour (they must've used quite a bit of fruit), but it's backed by a little bit of cloves from the yeast. There's a nice tartness as well... I wonder if a little wild yeast came in with the fruit?

Light to moderate body has a crisp finish.

375 ml bottle, no dating on it that I could find. Served in a chalice, the beer pours a hazy dark reddish/pink color with about an inch pink head that stuck around a while. There's also a small amount of lacing. Aroma is nice, the brew smells like fresh raspberries, raspberry syrup, tart berries and some wheat/grainy malt. I think the taste is similar to the aroma, but there's also some tart lemon noticeable. The aroma is sweeter in comparison to the flavors of this brew that are more tart. Mouthfeel/body is light/medium, it's well carbonated and refreshing to drink. I thought it was a good overall brew, I wouldn't mind trying this again in the future. $4.99 a bottle.

Let's start with a disclaimer. I have been known to enjoy fruit beers, and I love raspberries. Your mileage may vary.

Deep cerise pink. Light pink head, 2 fingers wide. Head dissipates fast. Great colour though. Assertive raspberry aroma with gentle floral notes. On the palate, it leads with sour raspberry followed closely by a squeeze of lemon. Tartness lingers long in the finish, joined by a gentle earthiness. Not particularly sweet. Light bodied and bubbly. This feels puckering but not overpoweringly so, with a pleasantly astringent finish. Simple flavours and aromas lent some degree of complexity by finish and mouthfeel. Very nice.

Pours a hazy purplish-magenta colour, initially throwing up nearly a full inch of fizzy pink-hued head. It fizzles itself out within 30 seconds or so, however; a soapy collar of foam remains, along with some bubbly, filmy patches on the surface. Given such flamboyant visuals, I was expecting the aroma to be a little more assertive - but nope, it's pretty subtle. Grainy wheat husks and crackers, with light notes of raspberry, grass and sort of a "stinky feet" funk. Good so far.

Very nicely constructed. Wheat malt sweetness and some grain husk flavours are more of a background presence, but as expected it's the raspberry that takes centre stage. Moderately sour (not puckeringly so), with citric/lemony notes and raspberry seeds mid-sip, but these are followed by a lightly sweet raspberry juice tartness which develops at the finish. Off-dry aftertaste with just a hint of berry skin. Light in body, with zippy carbonation levels featuring tiny bubbles that continuously prickle the palate, remaining crisp until the last sip. Highly refreshing and quite enjoyable.

Final Grade: 4.01, a well-earned A-. Nickel Brook's Raspberry Über is a step up from the unaltered base Berliner Weisse, but as an unreserved raspberry lover I'm probably a little biased. Regular Über was fine, but the addition of raspberries really makes this soured light wheat ale pop. Easily one of the better Ontario-brewed Berliner Weissbiers I've tried thus far, and definitely the best one you can find at the LCBO. Worth a try, though at $4/bottle I don't think it'll become a staple purchase for me.

375ml bottle - scientific people's beer, got it! No messing around with woodruff, just yet, eh?

This beer pours a clear, medium pink spawning salmon colour, with four hefty fingers of puffy, finely foamy, and somewhat creamy cotton candy pink head, which leaves a bit of streaky coral reef lace around the glass as it quickly blows off.

The carbonation is quite aggressive in its fanciful frothiness, the body a so-so middleweight, and sort of smooth, as a certain thinning effect starts to cause the bottom to fall out of the mouthfeel. It finishes trending dry, the fruitiness still capable, but in its tart and acrid guise, alongside some lingering neutered cream of wheat character.

Overall, a pleasant enough raspberry-flavoured tart brew, the base Berliner Weisse maintaining much of its inherent goodness in the process. Maybe not quite as heady as the DDC Solstice variant, but still worthy of a go for the imminent summer patio season, IMHO.

Poured into a pint glass. A hazy pinkish orange with a very pale pink two finger head which soon diminished to a thin layer which sticks around. No lacing to speak of.

Yeast and sourish fruit in the nose.

Taste is mildly sour and quite dry. The lack of sweetness allows the raspberry to shine through.

Overall, very smooth, refreshing and light. Good example of the style. Nice to see real fruit and not just syrup.

Pours bright red, ring of white head and no lace. Smell is full of raspberry and tart berry, some acidity, nice but a fairly straightforward nose, light plastic points at times. Taste is full of raspberry and ripe berry a moderate acidity follows, tart with a bit of a puckering sourness, lingering fruity aftertaste. Highly carbonated, medium-light body. Quite nice, but lacks something that would make this exceptional.

I picked up a bottle of Nickel Brook's Raspberry Uber for $5.79 at The Lager Mill. I've been wanting to try this one for a little and I'm interested to see how it will turn out, so lets see how it goes. 2017 Vintage. Poured from a brown 375ml bottle into a tulip.

A- The label looks nice, it's got a classy look to it and it's a little eye catching. It poured a nice red color which took on more of a brighter ruby red color when held to the light and it had a finger and half worth of off pink head that died down to a thin ring that eventually faded away and it didn't leave much lacing behind. This is pretty nice looking example of the style, but I wish it had a little better lacing and heat retention.

S- The aroma starts off with a medium amount of sweetness with the raspberries being the first to show up and they impart a raspberry jam like aroma and it's followed by a medium sour aroma. Up next comes some doughy yeast which goes into the malts which impart some pale malt, grainy, bready and light biscuit like aromas. This beer has a pretty nice aroma, the raspberry shows up just enough.

T- The taste seems to be similar to the aroma and it starts off with a medium amount of sweetness with the raspberries still being the first to show up and they impart all the same aspects that they did in the aroma, but this time they are just a little lighter. Up next comes a slightly higher amount of medium sourness and that goes into the malts which are a little lighter than they were in the aroma, but they still impart all the same expects. On the finish there's some lingering sourness with some light malty and raspberry flavors. This is a pretty nice tasting Raspberry Berliner Weiss, but I wish the raspberry showed up just a little more.

M- Fairly smooth, a little mouth puckering, slightly crisp, on the lighter side of being medium bodied with a lower amount of medium carbonation. The mouthfeel is pretty nice and it works well with this beer.

Overall I thought this was a pretty nice beer and I thought it was a nice example of the style, all the key aspects that I looked for showed up and they were nice, but they were just slightly rough around the edges. This beer had nice drinkability, I could drink a couple glasses of this when it's hot out. What I like the most about this beer is how true to style it is, nothing showed up that shouldn't be there. What I like the least about this beer is that the raspberry flavors didn't show up just a little more. I would buy this beer again and I would recommend it to anyone looking for a nice Raspberry Berliner Weiss. All in all I liked this beer, I don't have the best history with this brewery, but this one turned out to be pretty nice and I'm interested to see what else they can do when it comes to the sour beers. It's my new favorite beer from this brewery and it's a nice example of the style. Nice job guys, this is a tasty beer, keep it up.