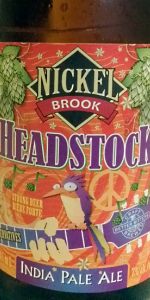 beerluvr from Canada (ON)

A: Poured a cloudy darkish orange into a Duvel tulip, substantial eggshell-colored head leaves a nice collar as it slowly settles.
S: Bracing nose of fresh Nugget hops and firm maltiness as an afterthought...but that nose is all about those hops!
T: Sweet candy-fruity yeasty maltiness then POW!...hops all up in your face, flowery and quite bitter, very well balanced but in the end the hop takes precedent.
M: Firm malt base, sweet yet non-cloying makes for great mouthfeel before the hoppiness takes the stage.
O: Fantastic take on an American-style aggressively hopped IPA. One of my faves up here in Ottawa and a great bargain at $2.85 (Canadian) for a tall boy can. Great find for this hop head...gotta keep my eyes open for some other offerings by this outfit. Recommended without hesitation.

Bought at the LCBO on the main drag in Peterborough, Ontario. After a few Canadian IPAs that I tried, I became a Canadian IPA cynic. This beer has brought me back into the fold. A hoppy, orangey, decent brew that stays with you between sips. Just the right amount of bitter vs. taste. I'd buy more than one of these if/when I get back to another LCBO.

Appearance - Golden-ish, dark orange color. 1.5 fingers if head leave a creamy white cap that is slow to disappear, Tons of sediment is readily visible in the glass which may detract from the appeal for some.

Smell – Hops! Piney scents as well as some earthy aromas.

Taste- Quite hoppy with the earthy elements and a piney citrus fueled aftertaste. Maybe a touch of lime thrown in.

Mouthfeel- Balanced as the hops are quite strong enjoyable for someone who likes this but not so overbearing that complete balance is broken. Nice creaminess as well that may be unexpected.

Overall – Quite a delicious beer, one that the hopheads will like, plus it has good ABV and other than the appearance has a refined plate that is creamy and decadent. A favorite in the IPA class.

EDIT(s) - Just had this beer again and was the same as before except for the fact that it was crystal clear and had no chunks of sediment floating around. Much improved appearance in my mind has meant a bit of an adjustment in scoring. Lately, I find myself enjoying this beer frequently, as I compare my top three IPA's I drink on a volume basis, which are Central City's Red racer, Nickel Brook's Headstock and Boneshaker by Amsterdam. I think I was selling Headstock short given that I buy a lot more of it than Boneshaker (although not as much as Red Racer) and yet it's scored lower. The 10 cent difference in price isn't making the difference. SO I've upgraded this beer to 4's across the board, because quite honesty I feel that's where it deserves to be. Maybe it's better consistency and excellent freshness that has brought me around, but Headstock is a winner for the Ontario craft beer scene.

Look: The beer looks likea dark honey with a one-finger head. The head dissipates quickly and leaves its foam on the glass as you drink. The body is also cloudy thanks to the yeast.

Smell: The nose is akin to lemon and grapefruit upon being smelled twice. The notes of pine woods are absent.

Taste: The palate briefly tastes like lemon then shifts quickly to the notes of pine woods. Because of the malt, you can sense the imprint of grapefruits on the pine woods.

Feel: Despite an IBU of 80, it is a rather light IPA. Although I appreciate the attempt to balance the bouquet of flavours, I would have loved to taste the grapefruit first and the lemon along with the pine woods altogether later.

Overall: This is an interesting take on an American IPA. My only reservation is about the weird order in which the different flavours come in play. Nonetheless, the beer has a voice of its own and I would drink it again.

Peachy fruits on the nose, melon, then musty and grainy. No citrus, this is more dank.

Fruits are more fermented than in the nose, slight sourness of lemon. Resiny and piny hops, some citrus peel. Background mustiness is present. finish is dry and bitter, but quite earthy, even swampy. Pretty unique and definitely stands out a bit to the typical profile in the genre. Med-light bodied and thick on the tongue, leaving a film. Carbonation is good.

Overall a bit of curve ball here, surprised me with the flavours. More pine earthy and dank IPA than fruit and citrus bomb. Above description says nugget hop was used which is described as earth woody and herby, which matches the taste well, but the can says Amarillo Simcoe Mosaic Equinox, which are more usual suspects in citrus forward IPAs. Simcoe is listed first so perhaps thats the earthy dominance. Really nice and much fuller than their American Pale Ale.

Frothy head that is unique and does not go away easy. A bit hazey.
Very unique, smells of apricot hops
Very sour (grapefruit) bitter taste and unique but a unfriendly long lasting heavy hops flavor in the end and after taste.

Taste is not to my liking but it is still a quality taste. That said however due to personal dislike of the taste style I can’t give full marks here.

A solid, bitter IPA, with a lot of complex flavors.
Nice copper tint to it, slightly hazy, and a good tight white-ish head on it.
It smells fabulous. Leaves and pine needles. Very outdoorsy.
It tastes even better than it smells. The bitterness comes through but the aftertaste is malt and more of those pine notes, rather than strictly hop bitterness.
Nicely carbonated, for the style. The alcohol level is well-covered, so you don't get a burn from that.
I'll be having another of these, for certain.

Mousel from Canada (ON)

One of several brews we picked up while staying in Ontario. This one obtained from LCBO, in a 473mL can, poured into pint glasses obtained on the Steam Whistle tour. We couldn't resist a local beer that calls itself an "American Style IPA" and follows the American West Coast trend of proclaiming its IBU prominently (80). Challenge accepted!

Pours a cloudy copper with a ruby tint, one-finger white head, with average lacing. Retention is average, eventually becoming a thin white layer. There is grapefruit peel in the nose, accompanied by a bit of floral pine and a hint of earthiness. Hits the tongue with enough carbonation to be noticeable, and the medium body has a good feel. Hops are assertive, on the piney resin side of the hop coin, an earthiness complimenting the malt. Relatively short finish, with more resin and just a hint of grapefruit citrus.

Pretty interesting interpretation of the style, opting for pine and earth as opposed to citrus. Quite quaffable, and one of the better brews we've had on this trip.

portwood from Canada (ON)

Can: Poured a deep orangey color ale with a large foamy head with good retention and some lacing. Aroma of earthy and bitter hops is dominating. Taste is a good mix between some earthy hops with a medium bitter finish. Caramel malt backbone provides a nice balance to the hops with some light residual sugar. Body is quite full with good carbonation. A bit too sweet for my taste but still enjoyable nonetheless.

Good head but doesn't add a lot to the enjoyment. Great hoppy scent, floral with minimal bitterness. More bitterness in the taste leaving the floral notes by the wayside. Malt is very well balanced with the hops... Meaning in this case that there isn't a lot of malt flavour. Average mouthfeel. Perhaps a tad watery. Overall a solid IPA that doesn't quite manage to rise above the pack. Definitely above average tho.

Edit: prematurely rated this. About halfway through the glass you get accustomed to the hops and the balance between bitter and floral becomes perfect and delicious. With this added revelation I think this beer does rise above the pack. Will buy again for sure

Hazy red under a moderate head that settles to a heavy film and gives spotty lace.

Nose is hops and a hint of alcohol. Sweet on the palate to start, finishes with lingering bitterness. Grapefruit hops and alcohol to taste, not a lot else. Kind of one dimensional as IPAs go. Drinkable, but unremarkable.

Enjoyed on tap at Bar Volo, IPA day. Neutral aroa, malting A lacey beer with a reddish tinged body. Above average carboantion and lighter than average outhfeel. Some bitternes, not all that tasty, the bitter flavour more in the finish and chalky on first sips, as filler.So-so drinkability.