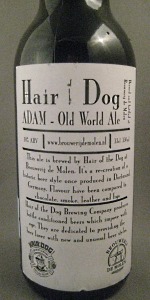 Notes: Collaboration with Hair of the Dog Brewing Company
View: Beers | Place Reviews
Reviews: 15 | Ratings: 29 | Log in to view all ratings and sort

Poured to a snifter glass.

A: The body is extremely hazy having a dark brownish colour and an opaqueness that seems so sweet and velvety. Head fights to be unnoticed but shows medium retention to the side of the glass. No lacing.
S: The aroma is very strong with burnt toffee, dark berries, dried fruits with alcohol on top.
T: Taste starts off with burnt toffee again and dark berries like an heavy quadrupel-style-like beer, making it look like a fusion of styles. Right after there's peaches, there's dried fruits and in the end there's an alcoholic end with a licquour-y end of high alcoholic content and bit citric bitter tones.
M: Body is high. Carbonation is great. Alcoholic content is huge but terribly noticed. Bitterness is low and sweetness is mild.
O: Amazing Old Ale. Great beer.

Murky brown, pours a little head, but no retention or leg.

Flavours of chocolate and cherry and raisins as well, but it's interrupted by a charred smokiness and hint of leather. Alcohol is warming. A little more balanced as it warms, with a figgy fruitiness coming forward, and almost sherry-like.

Lots of smoke and bacon here. Roasted malts and some chocolate. Hints of tobacco, leather, and dark dried fruits.

Solid, but too much bacon and smoke.

Poured into a Fremont small snifter. Pours a dark orange brown with a thin head that dissipates to tiny patches and a thin ring around the glass. Aroma of dark and light stone fruit, bready malt, light Belgian yeast, orange, a little oxidized. Profile more like a barleywine than old ale. Flavor is dark biscuit malt, dark dried fruit, dark stone fruit with light orange marmalade. Finishes with nice old ale style dry biscuit malt and residual fruit. Medium bodied with light creaminess, good mouth feel. The Hair of the Dog Fred is much straightforwardly malty, with classic deep biscuit malt and dried rather fresh fruit, in contrast there are much brighter fruit flavors in the De Molen version, with suggestions of English barleywine fruit. The finish returns to the drier malt and fruit. It must be the Belgian yeast that provides the lighter fruit flavors, and they are not unwelcome, although it is slightly disconcerting (but interesting) to have light fruit and the orange flavor mixed with the old ale malt and preceding a malty finish. Although this is not a traditional old ale, it is a very pleasant and inspired Belgian take on the style. Except for a little tartness in the finish, I like this nearly as much as the original Adam, which I liked very much. My second of this collaboration series, and both are so different from the originals (although incorporating elements) that I'm curious about the intent of the collaboration. If verisimilitude were the plan, this did not work. If the plan was to use similar ingredients, but with De Molen's yeast, this is was great. I like this a lot. I stumbled on a bottle of each of these on a visit with relatives, and so far have been very pleased to have found them. A nice collaboration between two breweries I really enjoy.

Pours a muddy dark brown with a thin ring of foam around the edge of the glass that leaves little splotches of lace.

Verdict: Highly recommended. Doesn't look like much, but it's a highly enjoyable sipper.

Appearance: Pours fudge brown and is capped by a frothy ecru head that contrasts in color; fading somewhat quickly, the head is leggy and leaves a squiggly trail down to the liquid

Taste: Scorched tobacco, molasses and fig forward, with leather and licorice building; very warm and boozy through the middle, with a burnt cinnamon character wrapping up the finish

Mouthfeel: Full bodied with low to moderate carbonation; a lot of warmth in the gullet

Overall: A beer to contemplate and, while I find it fascinating, I don't think I would care to re-visit as the flavors are overly harsh

Such a big raisin and dark fruit nose on this one along with some great bunt sugar. Taste is the same. Sweet, big, and delicious with a touch of smoke and woody leathery tannins. Thanks, bruv.

A: black, with an amber hue, no head

M: thick. probably the thickest beer I've had to date. at 10 abv this one bites just a bit, dry

O: a very fun beer this was. it was certainly old, as I believe this was purposely aged. I got this at Corti Brothers in Sacramento and there were other beers of the Hair of the Dog/Brouwerij collab and now I deeply regret not getting the others ;~; had I paid more attention I would've grabbed the others..

Well, I've been disappointed by Adam the last two times I've had it. First at the brewery (extremely buttery) and now this one. It's an average beer, but gone are the leather notes, dark molasses, black plum and roastiness. This beer has a sour cherry note to it. Oxidized? Perhaps, but that's two in a row with defects from different brewing locations. The yeast on this is also too apparent. Old Ale? Nerp. American Strong Ale? No. More like a Belgian Dark.

Dark ruby brown colour. No yeast particulate is visible within. No lees.

O: Something of a sipper. I expected better given Adam's reputation, but it's not a bad brew. I wouldn't buy it again. Underwhelming.

crazy beer, my second of the several these guys have teamed up on, and so glad they did too, since we dont see the normal hair of the dog beers here in denver. i have to wonder how different these are. they dont seem so de molen to me, with the yeast sort of less apparent, but they are awesome, and this trumps the fred for me by a long shot. fashioned as an old ale, its as much englsih barleywine or strong as anything else, with all the normal elements, but also with a few that set it apparent. its thick as taffy in the glass, i swear if it spilled it wouldnt run. its nuts, the texture of honey almost. surprised it isnt even stronger than it is, booze burn on the nose and back end, but seems almost concentrated to me, ice beer to the max. heavy barley malt, deep crystal type with english overtones and toffee and butterscotch running through it. i get raspberry jam too, quality organic farmers market stuff, but i get it. tangy and sweet, hard to not notice after i pick it up. yeast and sweet though, like they should make a brittle out of it or something. stupidly sugary, but thats the style. more carbonated than expected too, i thought these were supposed to be flat? a beer of amazing depth and complexity, and one that really doesnt need more barrels or fruits or anything. i know they do a ton of versions, but this is right on for me as it is. hard to drink quickly, but it gets better with temperature so whats the incentive to do so anyway? well worth the asking price, dying to have the original now...

A looks like dark cola, even the foam fizzes out like pop, no lace but a little color and legs try to form on the side

T a hint of coco, just a touch of soy, everything I smells still there in one form or another, more caramels, some booze but its mild, again I get just a little band aid holding this one back from greatness

M syrupy, sticky, some heat but it works, very low bubbles but to be expected from the style, dark toffee lingers with brown sugar

O complex brew with plenty going on, a few tweaks and I could see this being amazing, maybe some age would make a big difference with this one?

This one makes me want to try some HOTD stuff from the source, somehow I've only had one from them in the past. Solid beer for sure but now I need an original for comparison.

330ml bottle - apparently this is the same recipe as the one brewed in that hipster (shit, aren't they all) district in SE Portland, Oregon, except at De Molen. Different brewery, different beer, I always say! Even the styles here are different - but that's a whole other can of worms I shan't get into right now.

This beer pours a murky, dark mahogany-highlighted brown dishwater colour, with one chubby finger of puffy, loosely foamy, and somewhat bubbly beige head, which leaves a bit of pockmarked iceberg profile lace around the glass as it eventually bleeds off.

The carbonation is decent in its more or less supportive frothiness, the body a solid medium-heavy weight, and tacitly smooth, with the musty and besotted essences perhaps looking to cause a bit of fuss. It finishes still fairly sweet, the big caramel/toffee malt seeing fit to linger like a boss, while the other more ancillary players fade into the well-worn woodwork.

Well, I suppose that my best qualifier to my opening conjecture is comparing this to my review of the actual HotD Adam from 4 or so years ago. I'm not gonna do that here, but suffice it so say, deltas abound, though hardly in a bad way. Still big and very old-ale in its orientation, without the hoppy affectations of yer typical Pacific Coast craft brewer, maybe. Anyways, this is very good, and should stand on its own merits.

The brew with a strong malty character. The taste is complex, with similar notes to the nose. I guess it looks very much like successful hybrid of Belgian quad and Scottish "wee heavy". Not overwhelming and well harmonized.