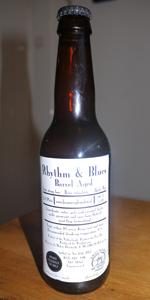 Small ring of head clings around the glass. Body is orange and sort of bourbon looking which leads me to the aroma...
Big bourbon to it, caramel, raisins.
Taste is not that great...astringent...bourbon, some woodiness, caramel sweetness, bitterness.
Body is kind of thin.
I don't know what's going in here. Love a big ol' barrel aged Barleywine and de Molen in general but this is not so good. Thankfully the pour is really small.

A hazy amber, suspended tiny particles being moved around by slow bubbles, massive foam that I have trouble fitting glass, it goes nowhere and has some of the best retention I've seen in a beer. partial rings all the way down and I'm left with a little foam brain at the bottom of my glass

S apple, pear, citrus I can't place, loads of soft caramel, vanilla, marsh-mellow, some wood, and honey, not sure where the booze is hiding

M thick and syrupy, bubbles cream it up a bit, a little sticky on the lips but I expected my lips to be stuck together after smelling and tasting so much sugar, a little booze going down and wood and caramel lingering

O I rather like this one, I'm guessing a bourbon barrel, almost has a year on it and i could see it improving with some age

label says brewed exclusively for Torst but I bought this at a Calgary Co-op in Alberta? I'm not complaining or anything like that, let the good times roll!!

This beer pours a hazy dark golden amber hue, with two fingers of lazily puffy, foamy, and somewhat bubbly off-white head, which leaves a decent low-lying wall of landward-ho lace around the glass as it steadily sinks away.

It smells of astringent, grainy oak staves, juicy citrus peel, bready caramel malt, some latent vanilla from the wood, which with the snappy alcohol really turns the mind to Bourbon. The taste is much more, but at the same time less of the same - edgy Kentucky hills barrel wood, laid-back, sort of musty caramel malt, a touch of saltwater taffy, pithy, indistinct citrus, a mild, leafy hoppiness, and some rather subdued warming alcohol.

The carbonation is quite understated, not a perceptible peep, really, the body an unsteady medium weight, those barrel characteristics tending to have that effect, and equally marred in its otherwise pleasant smoothness. It finishes off-dry, with the woodiness, blotted hops, and muffled caramel all contributing in kind.

Huh - a low-sweetness, restrained in its woodiness, and well-disguised boozer of a barleywine. My only truck with this is, one, the lack of overt hops, if you're going to ship it stateside, and two, naming it after an American musical institution. So, adorable English cask-treated barleywine it is.

12oz bottle into a De Molen tulip shaped taster. The brew appears a clear copper color with rising bubbles that maintain a thin film atop the brew that fades fairly quick. Some strings and spotty lace sticks to the glass.

The smell is sweet and floral with a combination of hops and alcohol. A hint of citrus smells almost like raspberry that fades into more of a generic fruited aspect that is minorly perfume-like. The more I smell this, the more jammy it gets.

The taste is like dried fruits...maybe raspberry or apricot coupled with a strong alcohol character thatbis somewhat fusel. A hint of cardboard like oxidation is noted across the back along with an herbal to medicinal bitterness.

This is a medium bodied brew with a modest amount of carbonation. It is quite a boozy bugger which is fitting for the style. The fruited quality certainly makes it unique but I was really confused as to whether or not I liked it. It wasnt bad, but wasnt great either.

Bottle from Etre Gourmet. Served in a snifter.

A - White foam settles to a thin collar, wisps, and a few specks of lace. Hazed marmalade-colored body.

T - The taste is quite similar, with loads of oak, toasted grains, and a light kiss of bourbon. Again, low sweetness for the style, with only a touch of caramel and stone fruit that pops up when the beer warms. Alcohol is quite well-hidden.

D - Solid beer, but nothing particularly memorable. I wish the base beer was a bit sweeter, although it's not totally out of character for an American barleywine. Might be worth a spin if you're at Tørst, but I wouldn't actively seek this out.

Had on tap at Tørst Brooklyn.

Thin white head with a bit of lacing. Aromas of toffee and vanilla. Well integrated bourbon along with a pretty rich base beer. Solid malt bill and it only get better as it warms. Good carbonation levels which compliment the taste. I am really glad I had a chance to try this on tap. Gotta love the BK.

Got this one from the De Molen bottle shop in Bodegraven. Apparently it was brewed exclusively for TØRST. Awesome.

From a bottle into a snifter
Bottled 15 November 2012

APPEARANCE: Pours a cascading one finger, medium looking, bubbly, white head with good retention. Head fades to a wisp and ring. Hazy burnt orange in color with no carbonation evident. A faint wisp remains until the end leaving a few dots of lacing down the glass.

SMELL: Caramel and toffee notes with some light bourbon barrel. Oak, vanilla and cocnut with some touches of red berries. Decent, though too mild perhaps.

TASTE: Caramel and toffee sweetness with some leather flavors up front, then some barrel and a burst of spicy alcohol after the swallow. Milder yet lingering finish of oak, vanilla and coconut from the barrels, as well as some caramel, butterscotch and leather from the base beer. A bit of spicy booze plays a roll as well. Flavorful and complex, though not quite as bold as hoped.

PALATE: Medium body and medium levels of carbonation. Semi-creamy on the palate, goes down smooth with no bite and finishes slightly dry. A bit of heat lingers.

OVERALL: Besides a weaker than average nose for these guys, this is a pretty good beer. Both the base beer and barrel are somewhat milder than we are perhaps used to from De Molen, but this is still a complex and well balanced barleywine. While I'd take a Weer & Wind nine times out of ten, this one was still a pleasure to drink.