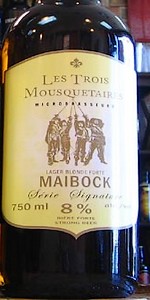 Now in 16 ounce can.
Pours a cloudy yellow to pale golden with finger and a half of puffy white head that dissipates shortly.
Grainy malt, strongly floral on the nose - distinct notes of honeysuckle, yeasty - almost saison like.
Malty on the palate with lager yeast - again almost saison like - sweet and floral - honey and a touch of alcohol hit.
Medium mouthfeel with modest carbonation - remains sweet with that honeysuckle note hanging.
Decent but not my favourite Maibock.

I have only previously tried Berliner Weisse from LTM which I really enjoyed, decided to try some more from this brewer. Got a 750cl bottle for 7$ poured into a flute glass. Poured my first glass at almost room temp as I forgot to fridge it earlier. Date bottled is a young 2017, only one month old. Had a very hard time removing the cork with my bare hands. Corkscrew recommended.

Smell: Acid, sour, almost urine-like, wheat, maybe some apricot. Not unpleasant at all.

Taste: First notice the smooth maltiness. A bit of hop after a few drinks. Maybe a sprinkle of spice. It's sweet with low bitterness. I think there's some undertones trying to come through. Slight bitterness that lingers. Alcohol is apparent but only mildly so. A bit of a bite.

Overall: Not what I expected. Very malt forward with some undertones of hops. Not bad by any means, but not a big fan of this style. Reminds me of Colt 45, but a lot less harsh. Not too complex, but this is a young one and I imagine a 6-month or so age would round out a bit and bring out some more flavors. Definitely different than any blonde lagers I've previously tried.

Do I recommend? If you like malt heavy beers, go for it. I probably won't drink again.

Great beer, drink a good beer in barcelona. Balance, just the right quality of alcohol. A great way to share conversation with a good beer.

From the 750 ml bottle in a snifter. This nice maibock pours a clear golden
color with a fantastic head of white foam that settles to a thick layer with nice
lacing. Nose of honey, grains, and subtle herbal hops. Flavors follow the nose
with honey and light cereal grains tossed into a medium bitter herbal hop salad
and strong grain alcohol notes. Mouth feel is medium with a warming note (odd
for such a low ABV brew) and moderately carbonated. Reminds me way too much
of many Russian brews I have had.....bold malt and moderate hop with little in the
middle. Overall a decent brew but I would not seek it out again although I do enjoy other
better brewed brews from this brewery.

Admittedly, I've never had a German variation of maibock so I'll just have to give my impression of this beer on its own merit. Aroma is fairly typical as it gives off a honey/grainy scent. It has a light amber color accompanied with a generous foam. The taste can be described as lightly bitter and hoppy with even lighter detection of honey feel/flavor. I liked it overall.

A bit sweet for a maibock, with a taste of honey and helles malts. Plant-like bitterness balances it a bit in the second act.

A drinkable albeit forgettable expression of the style.

Got this as part of my Rare Beer Club, one of the few non sour barf inducing beers. Excellent beer IMO. Very drinkable. I'd buy it if it were on the Spec's shelves.

I bought one 375-ml bottle at a liquor store in Montreal called Le bièrologue. The beer was bottled on July 29, 2015 and it can be held for 12 months according to the microbrewery behind this.

Look: The body has the pale colour of honey and is unfiltered. The beer initially produces a two-finger head, but it dies by the time you smell it.

Smell: The malt is hardly discernible. However, the alcoholic warmth, though not overwhelming, is the most dominant aroma. The sharp notes of hops could also be smelled.

Flavour: Although I would not expect a Maibock to be sweet, this beer has brief notes of honey. True to the style, this beer is more bitter than kellerbiers, helles lagers or any other types of lagers. Despite its high ABV, which checks in at 6.8%, you would barely feel the taste of alcohol. All in all, expect a grainy taste.

Feel: The beer feels warm because of the high ABV. Yet, it is a little juicy and refreshing. The finish is pretty smooth in that the flavour disappears more or less. There is no astringency nor harshness. The aftertaste has a small alcoholic warmth.

Overall: Although there is room for improvement, this beer's flavour and mouthfeel brilliantly walks the fine line between being refreshing and hoppy at the same time.

Pours to give a crystal clear tawny-cognac body with a large head reminiscent of sea foam. The scent consists largely of sweet fruits and raisins with a large dose of caramel, making my sweet tooth ache already. The taste is again rather sweet, though in more of a dull sense even when compared to raisins. No malt is detectable on the tongue though there is a prominent noble hop taste, which is still overshadowed by the sweetness. The feel is very smooth, with mild carbonation. Overall its pretty good, though I'm not sure the style is for me.

Poured from a 750 cork and cage bottle into a pilsner glass.

Color is slightly hazy straw with a enormous fluffy white head. Good retention and some semi-sticky lacing. Smell is sweet bread dough with some bright fruit esters and a slight hint of citrus. Flavor is sweet grainy malts on the palate with a mild grassy bitterness at the finish. Body is light/medium with a lot of carbonation. Very drinkable. Overall, it's a clean, crisp beer that is clearly well made. Just a little too sweet for my personal tastes though.

A: The beer is clear yellow in color and has a light amount of visible carbonation. It poured with a finger high white head that died down, leaving a thin head covering the surface.
S: Light to moderate aromas of bready malts and grassy hops are present in the nose.
T: The taste has flavors of sweet, bready malts along with notes of grassy hops, the latter of which contributes a light amount of bitterness.
M: It feels medium-bodied on the palate and has a moderate amount of carbonation.
O: This maibock has a nice body to it that coats your mouth a little and leaves you with somewhat of a filling feeling.

Poured from 750 mL bottle into pilsner.
A: Pours a clear under ripe banana yellow with very high carbonation producing a 3 inch bubbly white head that quickly dies down to a skim that continues to be fed by the carbonation jets.
S: Toasted cracker pilsner malt, grassy herbs, and a hint of citrus zest.
T: Follows aroma fairly closely. Hint of honey and bready malt too.
M: Light-medium body. Soft and oily feel. A bit of a carbonation prickle. ABV is well hidden.
D: Light and refreshing. Easily drinkable. Nice spring brew. Decent complexity, especially for style.

Poured from a 750ml corked/caged bottle into an imperial nonic glass, this beer presents itself as as a highly effervescent barely hazed golden yellow crowned by a mounding fluffy dense foam. Looks great.

Aroma is very sweet and fruity - pears, bananas, peaches. There is also some bread dough, grassy hops, and Belgian yeast.

Feel is medium body with plenty of carb.

Glad I had a chance to try a beer from this brewer which I doubt I will see for a long time if ever. Would love to try more.

Poured from a cork and cage into a weisse vase, the beer is a bright, vibrant maize gold coloring with a ton of carbonation throughout the body. A ton of carbonation, in a furious flow up the glass, constantly feeding a bubbly, white head that doesn't appear to be going anywhere. Aromas of toasted grains, subtle hints of honey and caramel, floral highlights, and a subtle hops bitterness. Flavors are tangy sweet forward, almost sugary to start, with a rich honey and extremely bitter vegetal/grassy blend, which lays on top of a bready and heavy backbone. You get layers more along the Belgian line, with heavy banana and a blend of clove and nutmeg spicing. This is a big beer, despite the lower ABV and abundance of carbonation. The aftertaste is more of the richly sweet and heavy fruit and bread notes, leading into a smooth, crisp, clean finish. This is a tasty beer. Give the carbonation time to settle out and you will see the drinkability increase greatly, as well as the layers of flavor develop for you.

Taste: very bready, malty with an herbal and grassy hop finale and residual sweetness from the malt without being cloying at all and remaining somewhat clean and crisp. It is very well balanced. Edit: The last glass really brings out alot of the bananas, cloves and pepper from the yeast settling at the bottom which i wasnt getting as much from the first glass, adding complexity to the beer. Very well done.

Reminiscent of the lager you might have had with your dad back in the day but 10 times better, tastier and more complex. A great example of how good a lager beer can be. It kinda reconciled me with the style. I wish i would see more local craft brewers do good lagers like this. This is a perfect intro beer for people new to craft beer and will please beer connoisseur aswell. I will buy again. Highly recommanded. 8.3/10 (overall) - 9.5/10 (lager)

Serie Signature Maibock from Les Trois Mousquetaires
Beer rating: 84 out of 100 with 106 ratings