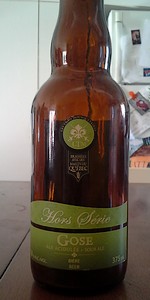 3.8% ABV
11.5 oz brown beer bottle $5.99 at Provisions Northampton MA
Appearance: light amber/dark honey - small head dissipates quickly to thin film, good bit of trub in the bottom
Smell: wow - so unexpected, maybe grapefruit but mild
Flavor: very mild - saltwater
Overall: 2/5 I don't dislike it, but I get no flavor really at all. Nothing special.
To me it tastes like a glass of water with a splash of beer and a tsp of salt. Certainly not worth the $ for me.

A= Pale with a light yellow haze. Aggressive pour yields a foamy white head that settles to nothing quickly.

Ok, I am not the best reviewer cuz I'm not that familiar with all the terminology. So please, let my limited experience speak for itself.
I traveled to Goslar Germany for work in November 2012. While there, I throroughly enjoyed every beer I could but the one which stood out head & shoulders was the Gose. One of the main reasons for this is I had never tried sour beer before and my colleagues only told me: "Ya, try that one, it's special". When I got back home, I made it my mission to look up Gose and I was so disappointed to find that it's rare as hen's teeth.

Since then I have found exactly 5 microbreweries who have tried their hand at a Gose, and most fail miserably compared to what I tasted in Germany. This one is by far the closest and my favorite. Even more interesting is that it's made not far from me. However, being a limited release means it's still hard to locate but they seem to make it about every other year. I absolutely love this stuff and could drink it every day (though other varieties would call to me). I don't know if this kind of "review" helps, but to my taste buds, this is easily 95% of what I had in Goslar. It should be citrusy, but not really identifiable as any in particular (leans toward lemon vs. grapefruit, lime) and there should be no vinegary taste. The salt stays in the background and coriander almost undetectable. I don't know what else to add here except kudos to Trois Mouquetaires -they pretty much nailed it!

Appearance: Pours a slightly hazy deep yellow. Tops up with a generous foam of head; a fast dissipation leaving no real lace or surface foam.

Aromatics: lemony-orange candy that has a bit of cough drop mixed in; tangerine citrus sweet and tart florals at the same time with some nods at the saltiness and just a hint of some spice (coriander-like)

Taste: Lightly salted lemon wedge that has been mixed into a lightly carbonated soda water with fresh wheat that keeps the sourness in check really nicely. Tapers off into a flat and non-descript zingy flavour - closest think I can relate it to would be tangerine rind without the bitter peel flavour in it. And just as quickly as the flavours hit they disappear cleanly without no real aftertaste.

Mouth: Can hold it’s own as a middleweight, carbonation is not really visible but it’s there giving it a great crisp snap with plenty of tongue tingle before it departs. There is a really tangy and tartness that doesn’t quite approach sour, and it has a fairly abrupt finish with not much left to linger on the palate.

Overall: This is my second Gose, I have a couple more in the fridge I plan to get to this week so I can have a good overall view of the style, but this one I liked quite a bit. It is a great drinking beer, I loved the crispness and the light saltiness was well integrated. And I feel with this one the salt character is not the focal point as much as the slight sour tartness is, which makes it that much more enjoyable for me because I love sours, and this one does a really decent job.

Pairing: I think this one has enough tang and carbonation that a nice seafood offering would be a good way to go - seared ahi tuna with a good spice-mix crust on it - a good sea salt or pink salt blended with dried chilis, dill, basil, garlic and onion powder, and a thee corn blended pepper. Or try a nice seafood ravioli (or spaghetti with crab/seafood as your protein) smother in a creamy Italian white sauce - a creamy carbonara or alfredo style sauce would be perfect.

This was poured into a stange. The appearance was a subtle crisp dried looking orange to yellow color with a slight transparency about it. Carbonation could be seen rising to fill a one finger white foamy head that dissipated fairly quickly. There wasn’t any lacing. The smell started off with a big burst of lemon, lime and citrus rind. The taste, pretty much, copied the smell. It had a light tartness about it along with the sourness as well and had a dry sweet citrus to semi-tart aftertaste running into the finish. On the palate, this one sat about a light on the body with a big sessionability about it. Carbonation felt good and low, and got slightly sticky in the feel. Overall, I liked it for me, but don’t necessarily see it as a gose as it was pretty weak on the "salt" flavor.

Tap: Poured a cloudy beige color ale with a medium size foamy head. Aroma of salt with light tart wheat malt notes Taste is a mix between some salt notes with light tart wheat notes and some light coriander notes. Body is quite full considering the low ABV with good carbonation. Quite refreshing though maybe a tad too salty for my taste buds.

Very nice, super easy drinking beer. Aroma is to style, but on the mild side. Actually the rest of beer is like that- to style, but understated. And body is a maybe a hair thin. Very good though, still.

11.5 ounce bottle. Served in a Ritterguts Gose glass, the beer pours a hazy gold color with almost a couple inch white head. Head retention is good, but there isn't much lacing at all. Aroma is nice, the brew smells like salt, wheat/grainy malt, minerals, citrus peel and a bit of coriander. I think the taste is the same as the aroma, but there's a lot of salty, briny minerally character to this brew. It's a more salty/minerally gose. The longer I drink this, the more I'm liking it. Mouthfeel/body is light/medium, it's smooth and easy to drink with a moderate amount of carbonation. I liked this a lot. If you're looking for more salt/mineral flavors in a gose, then you'll like this one. But if you're looking for more tartness, then you probably won't. I know I'd buy this again! $4.75 a bottle.

Trois Mousquetaires Gose is predictably cloudy; not only is the style left unfiltered but such a high percentage of wheat (typically 50-60%) ensures a good amount of protein and hence a thick, turbid complexion despite the rather light, yellow colour. Bubbles are abundant but head not so much; carbonation may seem active but it's evidently not very productive.

There's a reason spices like coriander were historically so expensive and universally sought after: their aromatics are ambrosial and unparalleled. A beer brewed with coriander, therefore, is correspondingly fragrant and boasts a seductively pungent perfume. There also seem to be notes of orange peel and citrus more generally. A drink that smells worthy of kings indeed.

Gose, like Berliner Weiss and for all the same reasons, is one style I'm surprised hasn't yet caught on the world over. It's immensely refreshing - far more so than the standard watered down and cloyingly sweet lager - and generally delivers all this refreshment in a manageable, medium-light frame. The fact that this one is a mere 3.8% alcohol is a bonus.

But seriously, is there any better beer for a hot, sunny summer day? It has zestiness courtesy of the ground coriander seeds as well as tart twang and quenching acidity from the Lactobicilicus. The saline quality is a kicker, the proverbial cherry on top, because, let's face it - the brain is hard-wired to crave salt. Taken with the soft graininess of the wheat, it's delightful.

To my knowledge the folks at Les Trois Mousquetaires are born and bred Quebecois, but they have the technical virtuosity and detailed craftsmanship of the best German brewers. Add Gose to a list that already included Doppelbock, Maibock, Rauchbier, Hopfenweisse, and Oktoberfest and you've got the best German lineup made outside of Germany. Hands down.

Hors Série Gose from Les Trois Mousquetaires
Beer rating: 87 out of 100 with 187 ratings