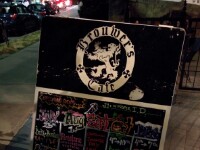 View: Place Reviews
Reviews: 110 | Ratings: 175 | Log in to view all ratings and sort
Reviews by SSGCujo:

An insane selection of rare and elite quality beers accompanied by a solid menu and rad "bartifacts" (incuding a crest detailing forbidden activities such as Feats of Strength), make this a must stop on any beer geek's hit list. A number of incidents with pretentious and flippant servers are the only knock I have against an otherwise outstanding establishment.

Had a couple beers and lunch out in the outdoor area. Inside is a little dark, but a nice good sized bar and dining tables/booths as well. Great taplist and bottle list of local craft beers and Belgians. Service was good. We ate an order of the Stoofvlees (beef stew served over frites) which was top notch.

V-Brouwers is located in Fremont in a huge space that reminds me of a 1990s era dance club. The paint is dark, but the floor space is giant and the ceiling is high, which lend a weird feel to the place. The giant bar could seat at least 25 and there were many tables too. Decor is beer-centric and you can see the bottle cellar behind the bar, which is a cool touch. We stopped in for lunch on a Saturday in April and the place was mostly quiet with just a few couples at the bar.

Q-The tap list and the cellar selections had the highest-quality beers I saw in Seattle and some of the best I have seen in the States. Options included Belgian, U.S. craft, and other less popular regions. It was just a crap, either, somebody put some thought into the beers that are available.

Ser-Our server was quick to help us and very knowledgeable about the beer and food. Pours were done correctly in the right glasses and she was friendly too.

Sel-The tap list is lengthy and contains a good variety of styles and regions. Likewise, the bottle list had a number of vintage offerings and stuff that would be worth trying if I had had more time.

F-We ate lunch and both of us enjoyed the pub-style food. I don't know that I would come here for fine dining, but they made some damn good french fries and the girlfriend's lamb burger was really tasty, if a bit decadent.

O-Despite the odd space and decor, this is one of the better beer joints I have been to.

A must visit in the beautiful town of Fremont. Amazing selection of bottled beers, whisky, beer on draft and killer food to boot. Just go...go now!!!!

One of the bottle selection I've seen in the US. Bottles that I didn't even know existed anymore. Bottles of 2008 Deviation? Really? Draft list is huge and very good quality. I am looking at the bottle list in awe. It's staggering.

Food: Get the Stoofvlees. One of the best things I've ever eaten. Ever.

Glad I got to make it over to this Rock Star of beer and food. Right across from a chocolate shop, so you can get dessert when you're done. Brouwer's is dimly lit, with 2 stories of coolness, eclipsing an old German beer hall. Great tap area featuring lots of hard to find offerings. We shared a Hopworks Under Pressure (Woodford Reserve barrel aged) a barrel aged Floggin Noggin, and the coup de grace, a Bravo 30 Year Bourbon Barrel Aged from Firestone Walker. Then the food came. My Cuban sandwich was awesome and my wife's seafood salad was equally delicious. Our server was patient with our food and beer choices and very helpful with suggestions. This was an early afternoon lunch, so the crowd was light. But I can only guess the masses when the sun goes down.
Make Brouwer's a must when you hit Seattle. You won't forgive yourself if you miss it.

Damn good food, with a damn good selection of damn good beer! As other reviewers have mentioned, the place is not well-lit, but this goes well with the overall decor. Personally, I approve of these choices. The staff look pretty hipster, but I have no reason to complain about my interaction with any of them.

Has a real neckbeard dungeons and dragons vibe to the place, its dark, like the dude's from bottleworks prolly hang out here and listen to death metal and grindcore.

Quality is phenomenal, they really have always had a real impressive tap and bottle list, not to mention hosting some rad beer fests.