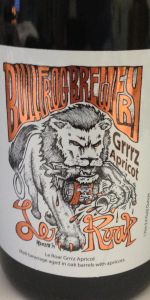 3oz pour at Dan's house. Bottle barely popped, not a good sign. Cloudy light orange. Big time acetic acid in the nose and flavor. Pinesol nose. Also some cardboard and plastic in the flavor. Low carb. Not good, though others liked it better.

Bottle from my parents, poured into a tulip.
The appearance was a nice looking glossy orange color with a foamy white head that stiffened and slid off at a mild pace. Some stringy lace.
The aroma started off with some sweet to tart apricot bits, light sour to sweet Brett, tart green apple, clean apple cider vinegar and then ended with a light leather sweetness.
The flavor brought the apricot playfully arranging the sweet to the tart and added in a semi-sour to tart Brett edge over some sweet wood. Aftertaste had the strong sweet to tart apricot along with the sweet wood.
The mouthfeel was about medium bodied with a decent sipping quality about it. Some pucker is there gripping my lips, but not distracting (acceptable to me). Carbonation felt spot on. ABV felt just as good.
Overall, pretty nice American Wild ale packing the sour punch nicely. Don't think "fruited sour" for this one, but don't think big "lip sucking" puckering sort of sour ale.

The beer pours as very strong and very vigorous head that takes along time to dissipate and even go down a bit. The beer itself is a really nice apricot orange that is extremely cloudy. It would normally be a very good luck that I definitely like if it wasn't for the fact there were bits of dead yeast floating everywhere and other bites.

The beer smell is pretty good. It has a nice and strong apricot note with a slight sugary bit to it. The brett is moderate and blends well with the apricot. Interestingly enough, there seems to be a good apple note going through the smell as well. There also seems to be some leather in the finish.

The taste is pretty good. It still has that nice apricot note with a little less sugar to it. The brett note is much stronger in this case and overshadows the apricot note a little bit.

The feel is good. It's a light bodied beer with a lot of carbonation and heft to it. It's pretty refreshing.

Overall, this beer seems to be pretty good for someone to up their sour game but the more hardcore enthusiasts might be able to find a better sour.

Compared to Fou' Foune, this was more balanced and less puckeringly tart.

Pour is hazed orange with lots of tight white head. Nose has a light dusty brett to it with tons of really ripe bright apricot. Taste is a bit sweeter, tons of bright ripe apricot, moderate sweetness, high carb, light dusty leather, hints of lacto, and low acidity, moderate bitterness through the finish.

Opens citrus, apricot tartness. Vinegar and acidic in the mouth with hints of apricot skin, pulp and lemon zest. Bubbly and tart and oaky in the end with a puckering, fruity aftertaste. Rather one-dimensional but the apricot works perfectly with the tartness.

Light bodied with moderate to low carbonation. Oily and slick in the mouth and goes down aggressive and lively. Finishes soft with a vibrant, sticky, accented aftertaste. Lambic-like.

Probably the second best of the bunch next to the regular Grrrz. Certainly worth trying but maybe not to go out of your way for.

This one pours a golden yellow-ish orange, like most of the apricot beers we had last night. There's a foamy half inch head, and a little bit of lacing.

This smells like candied apricot, with sour apricot flesh as well, with some mild funk, and an acidity that's fairly mild.

This has a ridiculous apricot character to it, but it's ultimately less complex than something similar from Bullfrog like Grrrz Kriek. The apricot character subsumes most of the usual Grrrz complexities. They're still there, with a bit of musty funk and sour hay/grain. Otherwise, there's a simply absurd amount of apricot goodness, both sweet and sour. This has gotta be one of the jammiest and fleshiest sours I've ever had.

This has a very juicy mouthfeel, with a sourness of about 5/10. The carbonation level is moderate.

This is a super delicious beer, but not the best of the Grrrz series.

Pours a medium-lighter copper body, one finger white head with nice longevity, medium collar and thin film. Smells of non-descript astringency, a bit of bitter apricot pit, slightly sugary, oaky, mild funk, a bit of lemon. It honestly was not what I expected based on the apricot sours I've had, including Fou' Foune. Flavour is similarly astringent, mild bitter apricot pit, a bit of fuzzy stonefruit skin, wheat, sweet malt, a bit of bread. Mouthfeel is medium-lower body, a bit overcarbonated, bitter stonefruit skin on the finish. Overall, beers like this is why I continue to appreciate Fou' Foune which I think executes stone fruit and sour/AWA/lambic extremely well. This one disappointed quite a bit.

750 mL bottle poured in a wine glass. Hazy orange body. Big chunky white head and a thick collar. Smells has a lot of apricot. Strong oak. A little bit of hay. Low acidity in the nose. Juicy apricot flavor. Really dominates, Lots of graininess and strong oak. Moderate tartness. Medium body. Well carbonated. Has a really nice apricot flavor. More fruit and better fruit than the others, but it covers up some other the base beer flavors.

A decent beer, but really nothing special. Candyish, and lacking in the tart/funk complexity that makes other beers of the style good. Nothing I'd go out of the way to try again.

On draft at Le Grrrz release

Feel - soft, great carbonation, interested to see how this will be in the bottle.

This was such an amazing treat to on draft so I can hold off on opening my bottle right away or possibly giving me the opportunity to trade it. Sooo much apricot on the nose and even more in the flavor. Love the bright haze.

thanks very much to tenderbranson69 for sharing this with me, enjoyed from the Le Roar Grrrz glasses.

The color is cloudy amber golden apricot color with quick dropping white head with spots of lace sticking. The smell has a very tangy fruity sour aroma with notes of wild yeast and a very woody smell with a slight tropical lambic-esque apricot infused funk-wild! The feel has a wonderfully sour without subtlety of sweetness with a very highly carbonated lightly acidic with slight acidic and subtle alcohol equal in the very dry finish.

The taste is great -very fruity with apricot flavor noticeable in the initial taste and light woody quality with a slightly tangy fruitiness with juicy apricot and acetic taste of wild yeast with mostly fruity entry and slightly acidic lemony accent. The taste has moderately woody flavor with a generous amount of woody tannin and light apricot floral and juicy quality in the taste and yet an astringent moisture evacuating element with dry sour fruity taste lingering after the swallow. This is a pretty great tasting apricot wild ale...one I was looking forward to that did not dissapoint.

Smells funky and wild with brett blending to earthy oak and some herbal hops still present. There is a wild fruited aspect present in addition to peachy/apricot skin-like character. Despite being a couple months old this is still juicy smelling.

Taste has pleasant apricot/peach character more like earthy skins than the sweet flesh. Earthen oak is present as well as brett imparting a bit of leather. There is even a dusty grain backing to this.

Le Roar Grrrz Apricot from Bullfrog Brewery
Beer rating: 94 out of 100 with 117 ratings