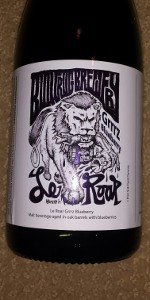 750ml corked and caged bottle into a Surly teku. Shared with schen9303.

Nose has a spicy blueberry presence. Plenty of cobweb and wet wood funk too. Sweet and tart. Flavor has big blueberry notes upfront. Sweet with a pungent tartness. Gets more sour in the middle with a Brett, foamy funk. Actually kind of one-dimensional with the juicy sour notes really taking over. Same intense tartness up until the finish. Blueberry is certainly there but rather meh. Aggressive on the palate with lots of bubbles that light up the tongue. Dry, super puckering finish that leaves my cheeks sucking in. Very good.

I'm actually pretty disappointed by this one. The blueberry presence is very prominent but there's nothing else to complement it really. Worth trying if you're into those very intense interpretations of a sour... but I'll pass on this next time.

Aroma has a real pleasant berry character mingled with a slight pink bubblegum note and then earthy leathery brett fills out the rest of the nose.

The taste is tart with a noticeable berry character upfront then almost grassy into the finish with very mild oak and brett leathery qualities.

This is medium bodied and modestly carbonated. A very nice offering in the grrrz lineup that strikes perfect balance between sour, bretty, oaked and fruited. For such a dainty fruit, it comes through nicely here. I could drink a ton of this but its cost/availability is quite a limitation.

750 mL bottle. Bright reddish purple. Medium white head. Nice blueberry aroma. Lightly acidic. Some oak. Nice, but not complex. Taste is really sour. Sharp blueberry sourness. Oak. Sourness kinda overpowers. Medium body. Medium carbonation. Still not that enthused by this one. Blueberry flavor is nice and better than the blackberry flavor, but it still masks what has, in my experience, been an incredible base sour.

Bottle purchased at the last release and shared yesterday.

This one pours a purplish, slightly murky color, with a very small head and not a whole lot of lacing.

Smells like pure sweet blueberry flesh. It doesn't smell as sour as some other blueberry sours I've had. There's a bit of Bullfroggy funk, but not as acute as other variants.

They really nailed the sweet fleshy aspects of blueberries here. It's one of the least sour Grrrz variants I've had. There's a bit of oak, and earthy swampy funk.

This is medium bodied, fairly juicy mouthfeel, and a moderate level of carbonation.

Not one of the upper tier variants in the series, but still nice anyway.

750 ml bottle. Bright reddish pink colored body, small white head that settled into a thin retention ring, minor lacing. Aromas are bright berry fruits, oak, white wine and a big sourness. Flavors are sour berries, oak and a nice funk on the back-end. Blueberries aren't overwhelming that they're noticeably picked out, but this is good nonetheless. One of the more sour Grrrz variants. Excited for these to be released.