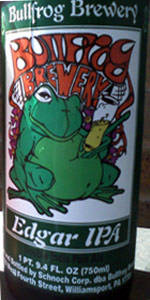 Notes: Named for the "Master of the Macabre," Edgar Allen Poe, as a tribute to his aptly-named short story ‘Hop Frog.’ We hope Edgar amuses you as much as he has us, but stay on his good side ... because much like in the story, this hoppy little frog bites back! Edgar IPA has been a fav staple at the Bullfrog since the beginning - a very hop-forward beer brimming with a notable citrus character, stonefruit aroma, and the expected bold bitterness of a modern American Double IPA.
View: Beers | Place Reviews
Reviews: 88 | Ratings: 289 | Log in to view all ratings and sort
Reviews by Darkmagus82:

Appearance –The beer is served a very hazy yellowish orange color with a tiny fizzy white head that fades almost instantly, with it leaving only a trace of lace on the sides of the glass.

Smell – The aroma of the beer is big of a fruity smell with tons of tropical fruits and citrus, being a mix of tangerine, orange, pineapple and mango. Along with these smells comes some aromas of a grapefruit hop as well as a little bit of a grassy smell, overall producing a rather inviting aroma.

Taste – The taste begins with some of the tropical fruit and citrus flavors that were hinted at in the nose, but while quite heavy in the nose they are not as heavy in the taste. These are joined upfront by a decent showing of a grapefruit hop as well as some more bready and cracker like flavors. The bready flavors fade as the taste advances and are accompanied by a decrease in the tropical fruits as well. All the while however, the cracker and grapefruit hop flavors get stronger, giving a much drier taste profile to the brew. The grapefruit really surges at the end and is joined by a bit of grass and pine, with the mix of flavors leaving a rather pleasant and crisp bitter flavor to linger on the tongue.

Mouthfeel – The body of the brew is rather thin for a brew of 7.5 % with a carbonation level that is a bit on the higher side. For the more crisp and hopped flavors of the brew, the feel is rather fantastic with it really giving the flavors a sharp and refreshing feel.

Overall – A quite tasty and rather more refreshing and crisp IPA. A rather nice brew overall.

Poured from a mini growler into a 16 oz pilsner glasd, coming from @jzeilinger I am sure it is fresh. Pours a beautiful yellow orange, with a sticky white head, that leaves behind amazing lace.

Taste follows, loads of tropical fruit upfront, with an explosion of pine and grapefruit on the back end, excellent.

Overall another winner from JZ. Thanks man, a fantastic beer.

750mL bottle courtesy of barleydine poured into a tulip.

Pours a hazy bright orange with a big creamy off-white head that shows excellent retention and leaves tons of delicate lacing along the sides.

The aroma sweet and citrusy with lots of pineapple and oranges, very pithy in nature with very little astringency in the nose. There is a healthy toasted malt presence as well balancing the sweetness of the citrus very well.

The taste is much the same with a big sweet tangerine and orange hop presence up front with a little bitterness, though it's still much sweeter than it is bitter. The light toasted caramel malts are present in the background and the citrus hops leave a slight astringency in the finish.

The mouthfeel is very nice as well, sticky with citrus juice and fairly full bodied, somewhere between IPA and DIPA. Good carbonation and body overall.

Well, I haven't been blown away by all of the Bullfrog sours I've had. They've been good, but this IPA is excellent. If you're a fan of juicy sweet IPAs that aren't overally bitter, this one is for you. Super drinkable and well balanced...I'm a big fan.

Poured from a 750ml bottle into a pint glass.

A: Standard pour reveals a massive, 4 finger head that collapses quickly to a point and just stops. Good retention. Head is white, creamy, and a bit coarse on the sides of the glass. Beer is a cloudy reddish-orange. Lacing is patchy but ample.

S: Nose is light hoppiness, strong cane sugar, clementine, and a creaminess that reminds me of warm sweet condensed milk.

M: Medium bodied and light carbonated but it really jumps on the tongue. Mouth is coarse, and very vibrant. Finish is present, but fades quickly and is not overwhelming.

D: A rather standard example of a DIPA. The creaminess is a welcome surprise here and sets Edgar apart from the others. A unique brew that is worth seeking out.

Served on tap into a pint glass.

A- pours orange with no head at all. Not sure if that's because it sat around for awhile before it was brought to me (which is what I'd assume) or what, but not impressed to start

S- super duper aroma of citrus hops! Not sure if this uses citra or if I'm getting tomahawk out of this, but dear god is it powerful

T- slight bitterness and mostly citrus...a decent bit of orange in this one

M- a little syrupy, but not overly so

D- it's not bad. Doesn't really do anything to put itself head and shoulders above the pack, though. Give me a pour with a decent head though, and maybe the rating could get bumped a little bit

When I was at the brewpub I made it a point to try this one as my last brew before I left. I noticed a bunch of the workers wearin the Edgar shirts, So I figured it must be pretty good. The beer poured out as a really nice looking copper color. The head was strong looking and white, the beer had a killer lacing to it. The smell was very hoppy and was very inviting. The taste was piney and tingled the tongue on every sip. The mouthfeel was smooth and prickly. Overall very enjoyable IPA. Would love to have it again one day.

On tap at the Bullfrog Brewery...

A - Orange/yellow colour that was slightly cloudy.

N - A lot of grapefruit and some floral hops. Definitely had a big IPA nose to it.

T - Citriusy hops and some pine. Bitter with a nice, smooth finish.

M - Medium body with a bit of chew.

D - A very good IPA. This beer should be widely distributed. It is an excellent example of the style.