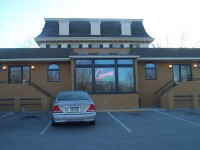 Stopped in the bottle shop and restaurant on my recent trip to Philly.

I struck up conversation with Matt while looking at the bottle shop before heading to the restaurant. I saw a real nice selection and told him I would be back to drop some coin, after having a few in the restaurant.

I went into the restaurant and got great service from the bartender Irene. I had the wings and chili with nachos both of which were above standard pub fare.

I took in a sampler of some rare treats along with a glass of creme brulee on draft and paper city blond hop monster. Matt came into the restaurnat to continue our conversation. We talked beer for no less than 20 min. He is a wealth of knowledge when it comes to beer and it was nice shooting the breeze about our favorites.

As a special treat he put on a keg of Ithaca 10 for me to sample. It will be released in the pub later in the month, but being the kick ass guy he is, and gave me a pour....FREE I may add.

After finishing up my meal I went back to the bottle shop. Matt had outdone himself again. He went to the back and pulled out some rare gems that have sold out sometime ago in the area. The prices are not too bad considering the insane bottle laws in PA. I was expecting to pay more to be honest.

He shared some real wonderful beers, some of which I never thought I would get the chance to try. That being said, the shelves inside the store were packed with great beers as well. Rare treats from brew dog, Cantillion, Mikkeller just start the list. There were even several bottles of barrel aged fat dog and dark horizon on the shelf for purchase.

Needless to say I spent a good amount. So much that there was too much to carry on the plane, leaving me with a package to send home. There was hundereds more worth of beer that I would like to have purchased.

Do yourself a favor and if you find yourself within a hundred miles of this place... STOP BY.

It's a true beer lovers paradise, and I can't say enough about Matt Capone! By the way thanks for the pint glass..